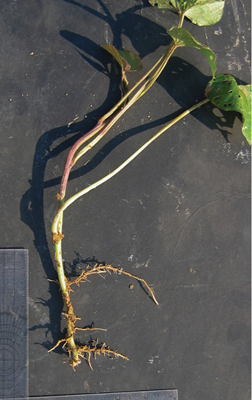 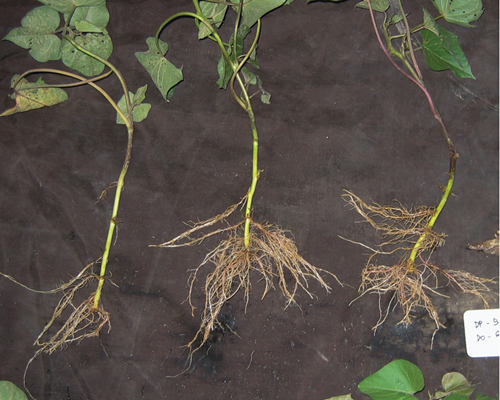 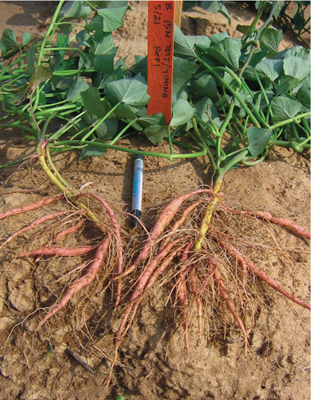 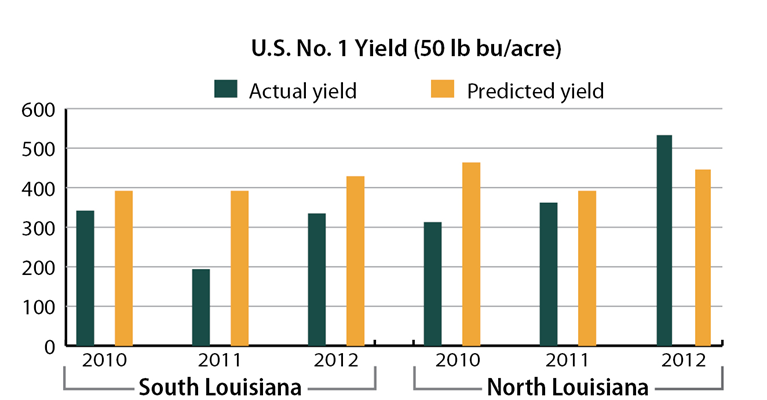 Figure 1. Actual and predicted U.S. No. 1 Yield from a south Louisiana and north Louisiana test site. 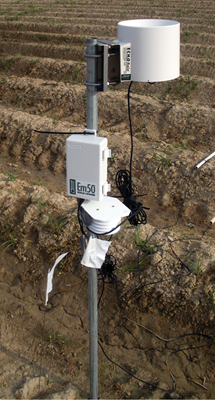 Growth in the processing sector and nutrition-conscious consumers are fueling sweet potato popularity in the United States. Domestic per capita consumption increased by 36 percent from 2000 to 2011. U.S. production of the crop exceeded 2.6 billion pounds in 2012. Louisiana ranks fourth in sweet potato production in the United States, behind North Carolina, California and Mississippi. A research goal in the LSU AgCenter is to increase sweet potato production efficiency to help meet the increasing demand for this crop.

LSU AgCenter scientists have recently completed a three-year project funded through a U.S. Department of Agriculture specialty crop grant to help find ways to overcome production limitations that reduce yield while improving root quality. Through research and on-farm validation of a prototype production model, the scientists identified several conditions, including inadequate soil moisture at planting, that can lead to yield loss. The prototype production model was developed to represent the relationship between fresh market yield – the number of U.S. No. 1 grade sweet potatoes – and agroclimatic variables known to influence the critical storage root initiation stages in the Beauregard sweet potato. This predictive model can estimate the yield outcome based on agroclimatic inputs, assuming other variables such as variety suitability, clean seed stock and weed pressure are not limiting.

Actual yields realized at harvest are dependent on biological, agroclimatic and other management variables. Lack of adequate soil moisture is a key limiting variable that can negatively affect root initiation and yield potential of the crop. Optimal soil moisture for sweet potatoes grown in Louisiana on a silt loam soil is 15-20 percent volumetric water content at a 6-inch soil depth. This number represents 50 percent of field capacity for soil moisture. This soil moisture threshold has to be calibrated for other soil types.

On-farm validation studies of a sweet potato production model were conducted from 2010-2012 on seven sweet potato farms across Louisiana. The validation studies were participatory in design in that cooperating producers were involved with site selection and contributed to production and pest management decisions in each evaluation year. The goal of these studies was to validate the accuracy of the model and use the findings in assisting producers with making informed production decisions about the sweet potato crop.

Portable weather stations (Photo 4) were deployed at each location prior to planting. In addition, fertility and nematode soil samples were collected at each test site. Several agroclimatic variables were recorded throughout the production season at hourly intervals, including soil moisture at 2- and 6-inch depths, rainfall or overhead irrigation events, humidity, maximum and minimum air temperatures and solar radiation. Production and pest management inputs were also recorded, including in-row plant spacing, row spacing, fertilizer applications and insecticide and herbicide applications. Stand counts (plants surviving at seven days after planting) and storage root initiation data were recorded in each of four plots. At harvest, the plots were harvested, and yield data were recorded. Actual yields were compared to predicted yields as generated by the predictive model. Comparative yield data representing actual and predicted U.S. No. 1 and total yield (all grades) at two locations from 2010-2012 are shown in Figures 1 and 2.

Producers who participated as case studies on this project were not only aware of the model-based decisions concerning sweet potato production, but they implemented these practices on their farms. They made informed decisions and subsequently optimized results, thereby demonstrating the research effectiveness. The participatory approach contributed to the development of a decision support system for sweet potato producers, which will reduce yield variability and improve efficiencies as it is implemented on farms across Louisiana and in other states. Such a system can help model alternative management scenarios and determine the most reasonable management interventions to achieve optimum yield outcomes under different agroclimatic conditions. Ultimately, the efforts will help producers capitalize on expanding opportunities and remain profitable.

Acknowledgements
The authors wish to acknowledge all producers that participated and collaborated on this project. The research and demonstrations were supported by USDA: NIFA project (2009-51181-06071), Participatory modeling and decision support for improving sweet potato production efficiency, quality and food safety.

(This article was published in the summer 2013 issue of Louisiana Agriculture magazine.)