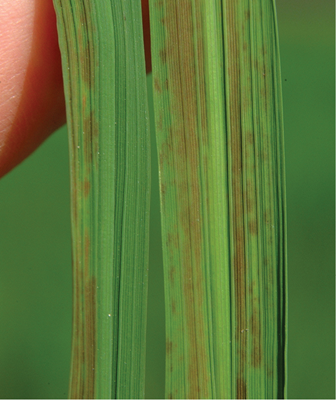 Photo 2. Bronzing of rice leaves due to zinc deficiency. (Photo by Johnny Saichuk.) 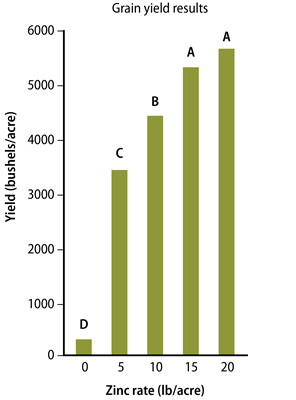 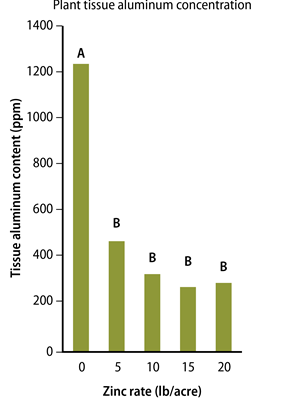 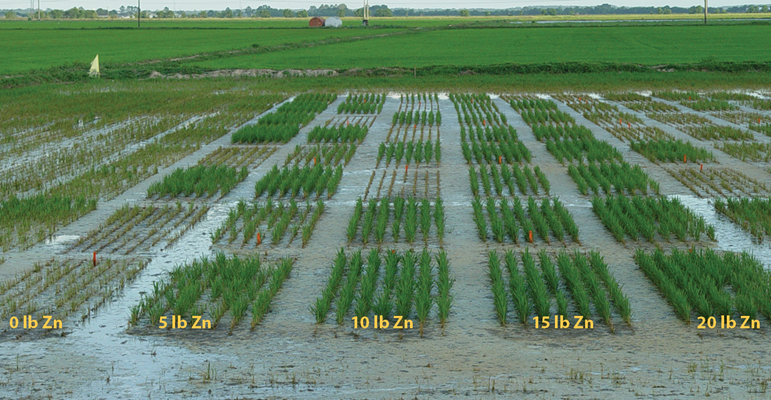 Photo 3: Rice response to varying rates of zinc fertilization at the 3- to 4-leaf stage of development on the Leonards Farm, Crowley, La. 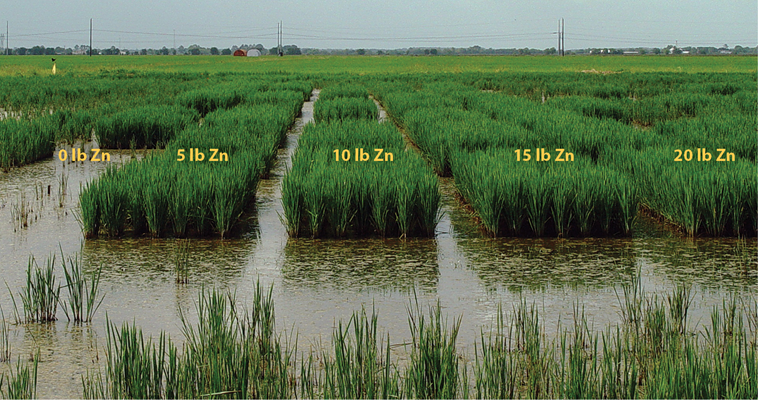 One essential micronutrient to play close attention to in rice is zinc. Zinc is often overlooked because less than a pound per acre is needed to grow a rice crop. Even though very little is needed, a zinc deficiency can cause severe yield losses. In fact, zinc deficiencies have been reported to reduce yields anywhere from 10 to 60 percent in U.S. rice. In severe cases, a complete loss of the stand can occur in zinc-deficient hotspots in the field (Photo 1).

Zinc deficiency generally occurs between the 2-leaf and mid-tillering stages in rice. One of the first visual symptoms in seedling rice is the yellowing (chlorosis) of older leaves from the base of the leaf to the leaf tip. This symptom is similar to nitrogen deficiency and is, consequently, the hardest symptom to positively identify. This zinc-deficiency symptom can often be seen in very young rice seedlings in response to cold temperatures. As zinc deficiency advances, easily identifiable, reddishbrown, irregular blotches begin to appear on the leaf blades (Photo 2). This often referred to as “bronzing.” Eventually, the entire leaf may turn this color. The rice plant will begin to die, beginning with the oldest leaves and moving inward on the plant. The establishment of the flood aggravates zinc deficiency and speeds the onset of symptoms.

Typically, zinc deficiencies are most prevalent on rice soils under several conditions:

Combinations of two or more of these situations typically represent some of the more severely zinc-deficient rice soils in the state.

Photos 3 and 4 show the varying responses from a zinc trial conducted on the Leonards Farm in Crowley, La. At this location, the soil zinc concentration was 0.7 parts per million, and the pH was 7.7. The optimum fertilizer rate was 15 pounds of zinc per acre (Figure 1). Zinc-deficient rice will take up excessive and toxic levels of iron and aluminum. Figure 2 shows excessive aluminum in the plant tissue decreased with increasing rates of zinc fertilizer.

An active approach to zinc fertility is the best form of defense to avoid problems in rice production. This approach uses results of a soil test prior to the onset of deficiency symptoms, thus maximizing yields. Unfortunately, a reactive approach to zinc deficiency often is the approach taken by many rice producers, who only apply zinc after deficiency symptoms occur. The problem with this approach is that once a symptom has occurred, some of the yield potential has already been lost and cannot be recovered.

Once a zinc-deficiency symptom has been identified, any flood water should be drained immediately. After the water has been drained, granular zinc fertilizer can be applied. If a foliar application is used, however, it is best to wait until the rice begins to have new growth. This generally takes at least one week after draining. Nitrogen fertilizer in the form of ammonium sulfate is recommended to replace lost nitrogen due to draining and re-establishing the flood.

Dustin L. Harrell is an associate professor and Mosaic Endowed Professor at the Rice Research Station in Crowley.