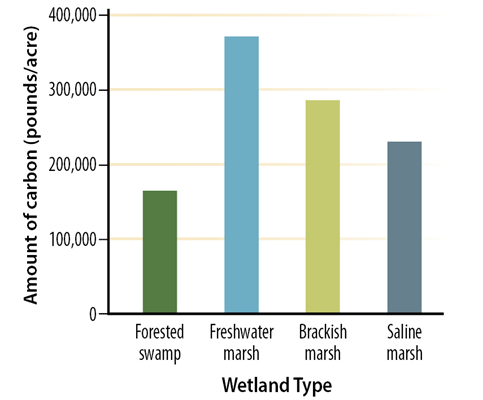 Figure 1. Amount of carbon in the top 3.3 feet of soil in different wetlands of the Louisiana coast. 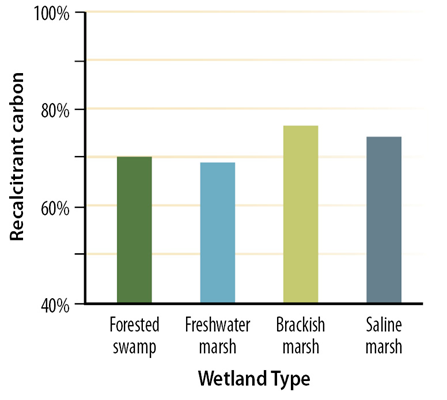 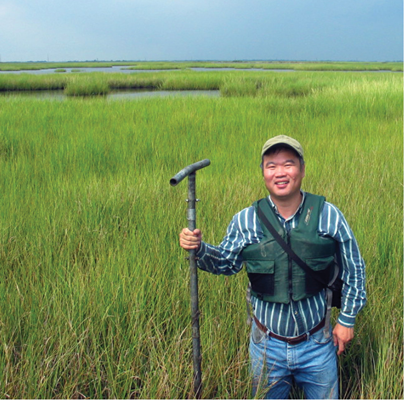 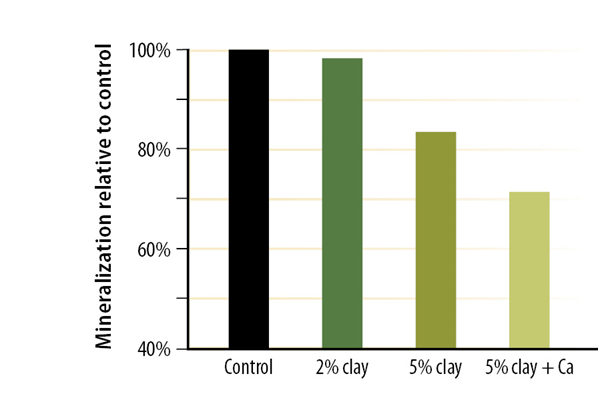 Figure 3: Impact of sediment clay and calcium on carbon mineralization in a Louisiana freshwater marsh soil. 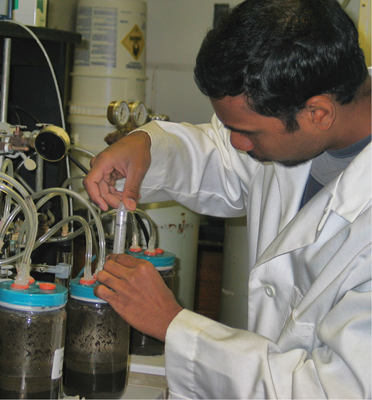 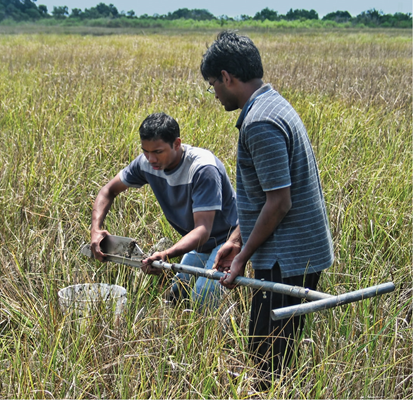 Wetlands play a major role in the global carbon cycle because they are an important carbon sink for atmospheric carbon dioxide. Despite their small proportion of land area, wetlands constitute as much as 25 percent of global terrestrial carbon.

The contiguous United States has 110.1 million acres of wetlands, in which 2.99 million acres are in Louisiana. Louisiana accounts for as much as 40 percent of the nation’s coastal wetlands. Additionally, Louisiana has as much as 379,000 acres of land under rice cultivation.

Wetlands have the potential to remove large quantities of carbon from the atmosphere, which will help abate global warming. Along with natural wetlands, constructed wetlands and rice paddies show potential to accumulate soil carbon as compared to other upland cropping systems.

Change in the hydrological conditions of these wetlands, however, could lead to the release of a huge amount of stored carbon back into atmosphere. Although soil carbon in wetland soils plays a role in future climate change scenarios, little research has been conducted on the role of wetland ecosystem management in increasing carbon sequestration. In lieu of changing climate scenarios, research is needed to predict wetland response to different situations in order to make sound resource management decisions to increase carbon sequestration rates.

The major types of wetlands in Louisiana are forested swamp, freshwater marsh, brackish marsh and saline marsh. All preserve tremendous amounts of carbon in soils. Some of these wetlands have peat layers as deep as 6 feet or more. Recent LSU AgCenter research has shown that carbon in the top 3.3-feet depth of soil is most abundant in the freshwater marsh followed by brackish marsh, saline marsh and forested swamp (Figure 1).

Soil organic matter accumulation in these wetlands has been estimated to accrete at a rate between 0.23 to 0.406 inch per year or 2,926 to 5,175 pounds of carbon per acre per year. AgCenter research has shown that the majority of the carbon in the top soils of these wetlands is relatively recalcitrant as indicated by nonacid hydrolysable fraction (Figure 2), which indicates high potential of these wetlands to sequester the carbon from the atmosphere. However, these wetlands – especially marshes because of erosion from tidal and river flushing – could be a significant source of organic carbon contributing to hypoxia in the Gulf of Mexico. Nonetheless, the actual contribution of marsh soil organic carbon to the oxygen consumption may be variable depending on the liability and recalcitrance of the lost soil organic carbon.

It is well-known that Louisiana wetlands are disappearing at an alarming rate because of regional subsidence and sea level rise. Louisiana swamps and marshlands are the most fragile and valuable wetlands of the country. Over time, the rise in sea level would turn these highly fertile and productive wetlands into open waters, if the wetland loss is not slowed or reversed. A portion of the Mississippi River has been diverted into the coastal marsh to protect these valuable wetlands by providing sediments and nutrients, as well as flushing out salts brought in by seawater intrusion.

Organic matter and sediment have been considered essential to the stability of these wetlands, in return for further carbon sequestration in these ecosystems. Therefore, developing various controls on soil organic carbon preservation in these wetland ecosystems is critical in the search for long-term solutions to increased soil carbon storage and reduced carbon gas emissions.

In a recent research effort, AgCenter scientists have evaluated the effects of sediment clay addition from the diversion of the Mississippi River on wetland carbon sequestration, which has showed that the sediment will have a significant impact on further preservation of soil organic matter. The addition of 5 percent sediment clay (on wet weight basis) could decrease organic carbon mineralization by as much as 16 percent, and this beneficial effect of sediment clay protection on organic matter is further enhanced by the addition of calcium from the river waters (Figure 3). Clearly, the addition of sediment from the river diversion not only provides much needed physical strength to the marsh ecosystems, but also increases carbon sequestration by decreasing the mineralization of soil organic matter.

AgCenter research has also revealed that while seawater intrusion changes the input of soil organic carbon because of vegetation succession, soil organic matter is transforming into the more recalcitrant form when moving along salinity gradients toward the coast from the inland. Further, the nature of soil organic carbon is determined more by the differences between the freshwater and the saline marsh soil environments than by the carbon sources in the coastal wetland ecosystems. Nonetheless, the lower total carbon storage in the saline marsh is likely due to its relatively low production and possible carbon loss by tidal flushing as compared to the freshwater marsh.

Jim J. Wang is a professor, and Syam K. Dodla is a post-doctoral research scientist in theSchool of Plant, Environmental & Soil Sciences.