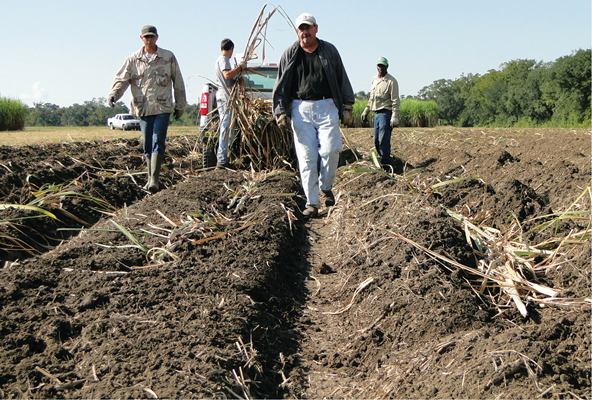 Nitrogen is considered the nutrient that most often limits crop production, yet its optimum management remains a somewhat elusive goal. Sugarcane, a high biomass crop that has high nitrogen requirements, is particularly difficult to manage for efficient nitrogen utilization. Excessive nitrogen can delay maturity, increase lodging and suppress sucrose content, while the primary effect of insufficient nitrogen is lower biomass yield.

Often plant cane – the first-year sugarcane crop – does not respond to nitrogen fertilizer because of a presumed adequacy of soil-nitrogen made available through mineralization during the fallow period that precedes sugarcane planting. Another factor that further complicates developing nitrogen fertilizer rates for sugarcane is the absence of reliable pre-fertilization soil or plant tests for nitrogen, unlike the other two major nutrients, phosphorus and potassium.

Louisiana sugarcane nitrogen fertilizer recommendations have been based on nitrogen response trials conducted across varieties, soil types and years. Currently, nitrogen recommendations take into account crop age (plant cane or stubble) and soil texture (light or heavy). Other influencing factors, however, such as nitrogen status of the crop or environmental conditions, are not considered.

Nitrogen fertilizer trials conducted separately more than 10 years ago by LSU AgCenter scientists used 32 percent ureaammonium nitrate as the nitrogen source. They discovered that the leading commercial variety – the high-biomass LCP 85-384 – surprisingly required less than recommended nitrogen for optimum yield. The consensus is that the nitrogen losses from volatilization of anhydrous ammonia – the nitrogen fertilizer used in the past – required applying higher rates to compensate for the losses. The greater efficiency of ureaammonium nitrate over anhydrous ammonia optimizes yield at lower fertilizer rates.

Subsequently, researchers in the AgCenter and the U.S. Department of Agriculture-Agricultural Research Service Sugarcane Research Unit in Houma, La., embarked on an ambitious program to re-evaluate the nitrogen requirements for both the leading and newly released sugarcane varieties. More than 75 nitrogen fertilizer rate tests produced informa- From left, tion needed to reformulate recommended nitrogen application rates for growers. Replicated trials over the years included commercial varieties currently occupying the greatest acreage, as well as newly released varieties. Also included were varieties that had fallen out of favor or were not widely grown.

Trials were placed on most of the major soil series in the sugar belt. These include the older sediments of former Mississippi River channels, the Mississippi River alluvial plain and the loessial terrace soils. These soil series of widely disparate attributes are broadly classified as either light- or heavy-textured for the purpose of recommending nitrogen fertilizer rates. Separate application trials were conducted for plant cane and first- and second-stubble crops of the production cycle. Nitrogen rates compared to the nonfertilized control were 40, 80, 120 and 160 pounds of nitrogen per acre with urea-ammonium nitrate as the nitrogen source.

In keeping with previous observations, mean sugar yields among the fertilizer rates were not statistically different for more than a fourth of the trials. Even more remarkable, over half of the plant cane tests showed no difference among nitrogen rates. This lack of response to applied nitrogen fertilizer tends to undermine the application protocols that serve as recommendations to growers.

Nevertheless, several consistencies were observed over the years. Sugar yields were generally greater on light-textured soil, and higher rates of nitrogen were required on heavytextured soil to achieve equivalent yield. Older stubble crops required the greatest amount of nitrogen for optimum yields, whereas plant cane and first-stubble crop yields performed well at similar nitrogen rates, particularly on light-textured soils. Sugar content was often depressed at the greatest application rate of 160 pounds nitrogen per acre, which not only confirms the need to reduce rates but also allays fears that nitrogen deficiencies might occur at the lower rates.

Though different varieties produced optimum yields at different fertilizer rates in different tests, these differential responses were minor and did not result in unique nitrogen recommendations for individual varieties.

Revised recommendations provide both economic and environmental benefits. Full adoption of the revised rates could save the sugar industry more than $10 million annually in fertilizer costs. Additional economic value from enhanced sucrose recovery also should be realized. By increasing sugar yield per ton of sugarcane, it is likely that transportation costs should decrease because fewer tons of cane would produce the same sugar yield per acre. Implementing the lower nitrogen rates coincided with historically high sucrose recovery during the past two harvest seasons, providing anecdotal evidence of the merits of the revised rates.

Overapplying nitrogen is of increasing concern given the controversy surrounding the Gulf of Mexico dead zone. Avoiding stringent fertilizer regulations will require the judicious use of nitrogen to protect surface water and groundwater from contamination.

New technologies on the horizon include using canopy spectral reflectance or chlorophyll meters to monitor inseason nitrogen status and using electrical conductivityidentified management zones for applying variable rates of nitrogen. These approaches to applying nitrogen only in amounts required at the time it is needed can lead to efficient nitrogen management to maximize profitability and protect water resources.

H.P. “Sonny” Viator is professor and coordinator at the Iberia Research Station in Jeanerette. Richard Johnson is a research agronomist at the U.S. Department of Agriculture-Agricultural Research Service Sugarcane Research Unit in Houma. Brenda S. Tubaña is an associate professor in the School of Plant, Soil & Environmental Sciences.