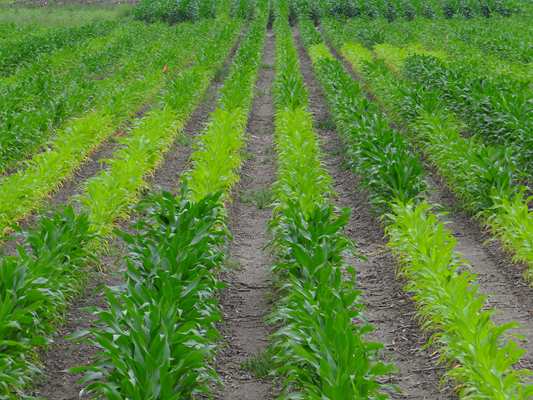 Nitrogen rates are apparent in research plots. The lighter-colored plants have received less nitrogen than the darker plants. 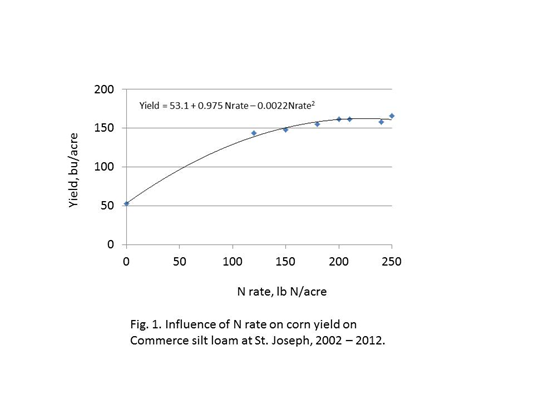 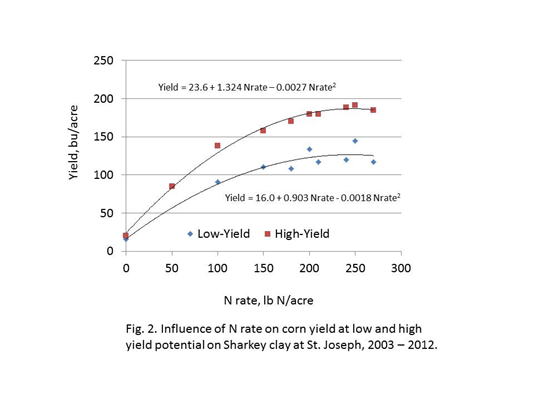 Nitrogen fertilization is a critical management practice required for producing maximum corn yield. Many factors, including soil type and crop management systems, determine optimum nitrogen rates. Other practices, such as time of fertilizer application, hybrid, previous crop, nitrogen carry-over and seeding rate, also may affect nitrogen rate. But the factor that has the largest impact on nitrogen is weather.

When temperature and moisture conditions are optimum, plant growth and development, including nutrient utilization, are enhanced. Too much or too little rain can affect plant development as well as the availability and uptake of nitrogen. Oftentimes, in-season adjustments such as late nitrogen applications at the tassel stage may help correct a nitrogen deficiency.

Traditional methods for determining nitrogen requirements have been by calibrating yield response to applied nitrogen rates for different soils and years. Consequently, nitrogen rates are averaged across time and may not be adequate in a particular year. Generally, higher rates are required for maximum yield on the heavier-textured clay soils compared to sandier soil types. Research indicates that this is due in large part better nitrogen response on the sandier soils, likely related to deeper root profiles and better soil moisture retention.

New technologies such as remote sensing are currently being evaluated for improving fertilizer nitrogen calibrations in corn. Determining the economic optimum nitrogen rate must consider both grain price and fertilizer cost. For example, as the cost of fertilizer increases, the economic nitrogen rate decreases. Currently, the AgCenter’s nitrogen recommendation for alluvial soils is 140-180 pounds per acre for non-irrigated soils and 180-240 pounds per acre for irrigated soils. Nitrogen calibration trials have been conducted at the Northeast Research Station in St. Joseph over the years.

Field experiments conducted at the Northeast station from 2002 to 2012 compared corn yield response to nitrogen rate on Commerce silt loam and Sharkey clay soils. These trials not only evaluated nitrogen rate but also other practices, such as nitrogen application timing, hybrid, irrigation and seeding rate. Nitrogen rates varied depending on other objectives of the experiment.

The Sharkey clay was subdivided into low-yield (less than 150 bushels per acre) and high-yield (greater than 150 bushels per acre) trials. The low-yield trials were not irrigated, and all but one of the high-yield trials were irrigated. Nitrogen was applied as 32 percent urea-ammonium nitrate solution at the early seedling stage. Grain yields are reported at 15.5 percent moisture. Economical nitrogen rates were determined using a nitrogen price of $0.65 per pound and corn at $5.50 per bushel. Soil management practices included conventional tillage on Commerce soil and stale seedbed on Sharkey soil. The previous crop was cotton in all trials, and production practices were those recommended by the AgCenter.

Yield was maximized at about 250 pounds of nitrogen per acre in both the low-yield and high-yield trials. The economic optimum nitrogen rate was also similar at about 220 pounds of nitrogen per acre for both categories. The lack of differences in maximum yield and economic optimum nitrogen rate between the two yield categories may have been due, in part, to higher-than-expected fertilizer nitrogen requirement in the low-yield trials, resulting from reduced fertilizer nitrogen efficiency.

The results of these nitrogen-calibration trials generally support the current AgCenter nitrogen recommendations. Many factors can influence both the native soil nitrogen and fertilizer nitrogen and its uptake and utilization during the growing season, which makes predicting prediction of the optimum nitrogen rate for a particular soil and year very difficult.

Because these conclusions report are based on average yield response to applied nitrogen over several years, the required nitrogen for a particular year may vary. In some cases, in-season fertility adjustments can be made based on plant growth and growing conditions. As new, improved hybrids are developed and management strategies evolve, refining nitrogen recommendations based on traditional as well as new approaches to fertilizer nitrogen calibration will always be needed.

Henry J. Mascagni is a professor at the Northeast Research Station in St. Joseph, and Brenda Tubaña is associate professor in the School of Plant, Environmental and Soil Sciences.