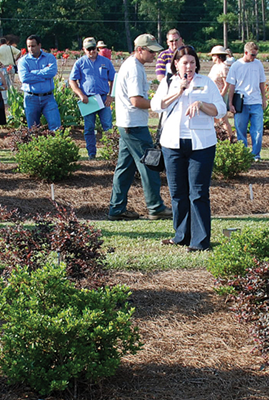 Regina Bracy, at right in front, is the coordinator of the Hammond Research Station. (Photo by Johnny Morgan)

Louisiana’s nursery and landscape industry contributes more than $2.2 billion annually to the state’s economy, according to the most recent analysis by the LSU AgCenter. The industry employs more than 56,000 individuals and ranks third in the state behind forestry and sugarcane in economic contribution. This segment of agriculture includes production (nursery, greenhouse, cut flowers and sod), horticultural service (landscape architecture, design, installation and maintenance) and retail (independent garden centers and mass merchandisers).

Even with the recent downturn in the economy, market surveys indicate that people continue to garden. The National Gardening Association recently found that 68 percent of all households with a yard or garden, or an estimated 61 million households, anticipated that their involvement in gardening in the next few years would remain the same, and 22 percent said their involvement would increase. Only 10 percent said they would spend less time in lawn, garden and landscape activities.

Home gardeners have a huge appetite for information. AgCenter parish offices around the state get more daily calls on horticulture than any other topic, and 80 percent of the visitors to the AgCenter’s website seek horticulture topics. The AgCenter has 23 Master Gardener programs in 49 parishes, which represent 96 percent of Louisiana’s population centers. Master Gardener associations provide financial and volunteer support for many AgCenter programs.

The LSU AgCenter is involved in research and extension activities that provide service and information to nursery, landscape, garden center and turfgrass professionals as well as home gardeners. Examples include the new Louisiana Super Plants program that provides promotion of the best performing ornamental plants. The AgCenter’s "Field of Excellence" program provides guidance to improve the condition and quality of high school football fields, many of which are unsafe because of compacted soils, excessive weed pressure and poor turf coverage.

The Hammond Research Station conducts large-scale ornamental plant evaluations – from annual flowers for the cool and warm seasons of the year, to roses, azaleas, crape myrtles, new ground covers, herbaceous perennials and more. The largest herbaceous ornamental plant trial in a multi-state area is conducted annually at the Hammond Station. These multi-year trials are used to introduce and recommend the best varieties and new plants for Louisiana and the Gulf Coast region. Hundreds of visitors (professionals and homeowners) view these evaluations each year.

Landscape horticulture research at the Hammond Station provides information on nutrient management and plant growth regulator use in the landscape and the ability of landscape plants to remove (biofilter) nitrogen and phosphorus from runoff water. Research on production management (variety, fertilizer and water) and the use of biopesticides and action thresholds provides growers with ways to more effectively and economically manage the insect thrips in their crops.

Burden Center in Baton Rouge is a longtime fixture for nursery and landscape professionals. The first ornamental horticulture/landscape horticulture field day held by the LSU AgCenter took place there in 1983, and research for commercial horticulture and home gardeners continues. Nursery production research concentrates on efficient use of planting media, irrigation and fertilization. Turfgrass research addresses weed issues, national variety trials and production practice studies. Floriculture studies have included production methods for new crops and an annual poinsettia variety evaluation. The AgCenter also provides plant pathology and entomology support for the industry along with services from the soil testing and plant analysis laboratory.

Service to the nursery and landscape industry in Louisiana is a high priority of the AgCenter. We look forward to contributing to the continuing growth and value of this industry.