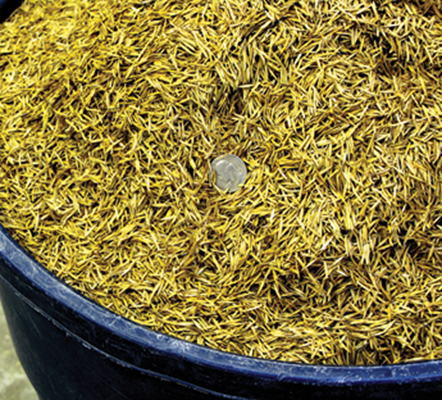 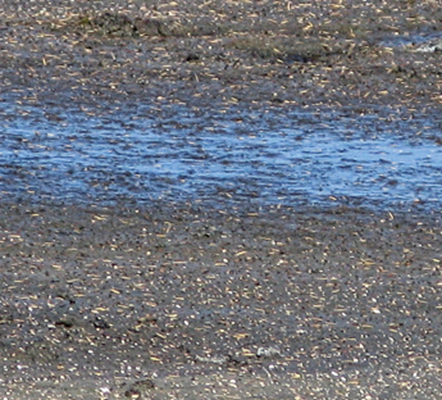 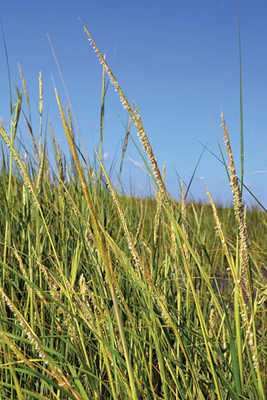 Direct seeding of smooth cordgrass (Spartina alterniflora) using aerial applicators, such as a fixed-wing airplane or airboat, can establish healthy vegetation in a single season, delivering rapid stabilization of newly constructed or nourished marshes. This application has potential to provide significant economic and environmental benefits because dredged sediments are increasingly being used in coastal restoration efforts to reclaim large areas of land loss.

Sediment harvested from adjacent open-water sources or pumped from sea or river bottoms miles away is used strategically in constructing terrace fields, re-establishing lake rims and creating emergent marsh areas. Within the Coastal Wetlands Planning, Protection and Restoration Act Program, the size of individual marsh-creation projects has typically ranged from approximately 200 to 700 acres. Marsh-creation projects are being implemented on an even larger scale through other restoration programs, including state-funded projects, the Clean Water Act Compensatory Mitigation Program and the U.S. Army Corps of Engineers’ Beneficial Use of Dredged Material Program, which alone has created more than 27,000 acres of marsh. In addition, recent state and federal comprehensive coastal planning efforts have evaluated restoration alternatives that would include tens of thousands of acres of marsh creation using dredged sediments in the near future.

Rapid development of vegetation cover with the appropriate plant species is critically important to provide adequate protection for these newly constructed marshes and marsh structures. At the end of dredging operations of each project, the seed can be delivered aerially as soon as the fluidity and strength of deposited soils can adequately support the biomass of the growing plants. Rapid revegetation can also help prevent the establishment of invasive species on these exposed sites.

Coastal land loss and consequences
Reducing the rates of coastal marsh loss in Louisiana and preserving this productive estuarine ecosystem are not only crucial to the economy of the state but also to the life and culture of many people who depend on this environment. Louisiana lost 1,883 square miles of coastal lands between 1932 and 2010. Without intervention, another 513 square miles are predicted to be lost by 2050.

Louisiana’s coastal wetlands provide critical habitats for nearly 90 percent of species in the Gulf of Mexico and 98 percent of commercial fish and shellfish. More than five million ducks, which is 20 percent of the continental population, winter in Louisiana each year. During the peak spring migration season, about 25 million birds arrive in coastal Louisiana each day. Commercial fishing in Louisiana is a $300 million enterprise annually, and more than 70 percent of it comes from species such as oysters, shrimp and blue crabs that use the coastal wetlands as a nursery for their young. Annually, Louisiana issues an average of 900,000 fishing licenses and 330,000 hunting licenses, and fishing and hunting activities depend on these wetlands as habitat for game species. Additional recreational activities such as boating, camping, hiking, swimming, birding, photography and painting, which are abundant in wetland areas, also are affected by this massive land loss.

Aerial seeding of smooth cordgrass
During the past several years, the LSU AgCenter has conducted extensive aerial planting experiments with a newly developed smooth cordgrass seed called PolyC15. A fixed-wing airplane was used in a Bayou DuPont marsh-creation site near Belle Chase, La., in Plaquemines Parish, and an airboat was used in an aerial seeding at a Lake Pontchartrain site within the Big Branch Marsh National Wildlife Refuge near Lacombe, La. The Bayou DuPont marsh was created by pumping sediment from the Mississippi River about eight miles from the site.

The aerial seeding on the Bayou DuPont site had a limited success because of a rapid dewatering process that was faster than expected and caused the majority of the site to remain dry. Because of the dry soil, most of the seed was displaced onto an upland site by strong winds and did not survive. Only seeds that had fallen into are where moisture remained were able to germinate and grow. A large number of these seedlings grew into full plants. The resulting vegetation was patchy and accounted for only about 15 percent of the total area originally seeded. The quality of vegetation varied from robust in the intertidal areas to stunted in higher-elevation areas generally not considered as the natural habitat for smooth cordgrass.

Direct seeding using an airboat in bare soil in the Lake Pontchartrain site, however, produced excellent vegetation composed of very dense smooth cordgrass plants with an average stem density of 11 stems per square foot in less than five months. The seed from this population reached maturity in mid-November 2010.

The latest aerial experiment was conducted on April 25, 2011, using a commercial fixed-wing airplane over 10 acres of newly constructed marsh at the Louisiana Department of Wildlife and Fisheries’ Marsh Island Refuge on the coast of Iberia Parish. This 1,159-acre project was part of a federal- and state-funded activity to repair damage from Hurricane Lili on the eastern tip of the island by pumping 3.8 million cubic yards of dredged material from East Cote Blanche Bay. Following the aerial seeding, Marsh Island and the adjacent coastal regions experienced an unusually long period without rain. Healthy and robust smooth cordgrass grew despite the problem.

By the end of September 2011, the overall seeded area was covered by mature smooth cordgrass plants. Dense smooth cordgrass populations grew in some areas; however, sparse vegetation was also evident, depending on soil elevation relative to water levels and movement. By this time, some plants were already flowering, and in mid-November they produced mature seed. Detailed observations on individual plants revealed that the cordgrass population exhibited high genetic variation, which included plant type, stem color, plant height, leaf stature, leaf size, leaf color, panicle length, panicle size and heading date. The diversity observed correlates well with the DNA fingerprinting data that were used as one of the important criteria in developing high-seed-producing PolyC15 experimental lines used in this project.

In addition to seeding the interior part of the newly constructed marsh, the airplane dropped a swath of seed over the open-water side of the containment dike. It yielded extremely dense cordgrass vegetation with significantly smaller stems. This indicated that seed floated back, landed along the shoreline and ended up growing in a relatively small area. This finding can be further evaluated to increase seed versatility to better adapt under high wave actions. Varying the seed weight with a seed coating could be a key to further improving direct seeding for both high- and low-wave conditions and to enhance planting and placement precision.

Seed supply
Routine direct seeding for coastal restoration will require a steady supply of a large amount of seed that can only be obtained from a production field of seed-producing smooth cordgrass. High seed-producing lines of PolyC15 have been developed through a close collaboration among LSU AgCenter scientists and are in the final stages of development for public release. They are being cultivated at the Rice Research Station and used to produce seed for aerial seeding experiments.

Smooth cordgrass is the predominant species in the intertidal coastal salt marshes with a great adaptation to various salinity levels from freshwater to sea salinity. Its complex root system binds well to banks and shorelines, preventing erosion from tidal action. Because of that, smooth cordgrass typi cally is desired for use in brackish and saline habitats.

Developing a method of cultivation and seed production through appropriate fertilization, weed management and mechanical harvest is an involved process being carried out to ensure that upon releasing high-seed-producing smooth cordgrass varieties, the coastal plant industry and coastal restoration community can adopt this innovation. At present, the availability of a sufficient quantity of seed for most Louisiana native wetland species is non-existent. A seed-based smooth cordgrass planting system can be used as a model for developing seed-based planting for other major native species, including California bulrush, seashore paspalum and bitter panicum, that are needed in most coastal restoration projects.

Aerial seeding and hand-transplanting comparison
Aerial planting is a new approach to coastal marsh revegetation technology. Current revegetation efforts are largely conducted through hand-transplanting. Planting vegetative forms generally provides the most reliable establishment of the desired species and accelerates establishment of a diverse native community. Even though the cost of vegetative planting is more expensive than that expected for an aerial seeding application, this method is much less expensive than building structures for shoreline erosion control and typically is less than 10 percent of the total construction cost of an estimated $30,000 to $40,000 for an acre of created marsh. Hand-transplanting, however, is labor-intensive and slow. Transportation can also be challenging because the majority of Louisiana’s coastal wetland restoration projects are in remote sites where access is limited to boats and other watercraft. The project sites, especially those in created marshes, are dominated by fluid, low-strength soils that make on-site travel and planting difficult. Precise timing of hand transplanting also can be difficult because of the inability to predict exactly when conditions will be appropriate for planting. As an alternative, aerial planting can now be used.

To date, there has been no reliable commercial seed source of any native wetland species; however, seed-based smooth cordgrass varieties are in the pipeline for commercial seed applications. Such development can pave the way for seed-based releases of other native plants needed to increase species diversity for saline and brackish marshes as well as for intermediate marshes. Requiring only minimum ground activities, aerial seeding can plant hundreds of acres in a single day. This direct seeding will reduce planting costs, minimize labor and increase the speed of restoration. A fixed-wing airplane can reach practically any remote marsh area along the Louisiana coast.

The aerial seeding experiments conducted in the eastern and western coastal plains of Louisiana revealed that direct seeding of smooth cordgrass is a viable approach to revegetating newly constructed coastal marshes rapidly. This could be used as a model for other native species. This technique can easily be combined with other existing restoration tools to achieve specific target goals. When desired, aerial planting of smooth cordgrass can be combined with other planting methods to include other species as needed to promote diversity and produce highly productive ecosystems capable of supporting abundant wildlife.

Acknowledgement: This research is partially funded by a U.S.Department of Agriculture Special Grant and Louisiana Sea Grant.