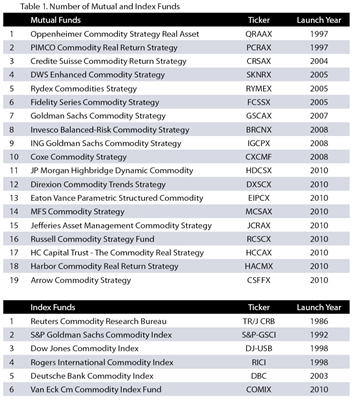 The number of agricultural commodity funds (mutual and index) available for public investors increased from three in the early 2000s to 20 in 2012. (Click the image to view a larger table.)

With rising levels and increased volatility in commodity prices, agricultural producers have begun to question if traditional marketing strategies can still be used to manage risk in the farm operation. Recent research supports the thoughts of those producers. For example, soybean hedging efficiency decreased 53 percent between 2001 and 2005. Consequently, recent LSU AgCenter research focused on several nontraditional factors besides supply and demand that may influence the volatility of soybeans futures market prices, such as energy markets and policy, exchange rates, and speculative investors.

Crude oil prices were examined because of their relationship to crop input costs – primarily fuel and fertilizer – as well as their effect on the demand for biofuels. Crop production costs have increased – up approximately 54 percent since 1999 – with a large portion of this increase directly attributable to the increase in crude oil prices. Higher crude oil prices have also placed renewed emphasis on biofuel production (ethanol and biodiesel). Recent U.S. renewable energy policies that resulted in increased ethanol consumption have helped establish a significant new market for corn that has created dramatic acreage shifts, as producers reacted to these market signals by shifting crop acreage into corn. This changing dynamic in planted acreage from year to year has introduced significant volatility into market prices for soybeans because we have fundamentally altered the supply and demand balance for commodities like soybeans.

Findings from LSU AgCenter research show that oil prices have influenced monthly soybean futures price volatility since 1999. High crude oil prices have been influential in creating competitive advantages for biofuel use, resulting in continued strong demand for ethanol despite the expiration of the corn-based ethanol tax credit. Because less than 1.5 percent of total world soybean acreage is devoted to biofuel production, major price swings in oil have added volatility to soybeans as the commodity competes with corn for acreage. Similarly, LSU AgCenter researchers highlight similar arguments for the decreasing acreage of cotton in Louisiana starting in 2007.

Another factor adding to volatility is the increased demand for soybeans by China over the past 10 years. Increased soybean sales to China reduced domestic stocks and generated increased market sensitivity to changes in supply and demand. Since 2002, annual soybean exports from the United States have increased 32.1 percent (1 billion to 1.32 billion bushels). This increase has been driven by China, whose increased soybean consumption has made them the world’s largest importer.

Another factor that has been examined by LSU AgCenter researchers is the strength and weakness of the U.S. dollar. As the exchange rate between the dollar and foreign currencies changes, so does the relative costs of U.S. products for those countries. If the dollar loses value relative to other currencies, it makes U.S. products relatively cheaper, usually increasing U.S. exports. The weakness of the dollar since 2002 has also increased the interest in futures contracts of agricultural commodities as an alternative to bonds, stocks and currencies.

However, comparing the currencies of the peso (Argentina), real (Brazil) and yuan (China) to the U.S. dollar, we find no evidence that the changing strength and weakness of the dollar against these currencies influences soybeans futures prices. While the weakness between the dollar and these currencies reached a record level of 58 percent from 2002- 2005, it rebounded significantly by 2011, reaching a level of 87 percent, likely negating the influence of the dollar on soybean futures price volatility.

The final factor examined and perhaps the most controversial is financial speculation. The evidence of whether commodity investing is increasing is not in doubt because the number of agricultural commodity funds (mutual and index) available for public investors increased from three before 2005 to 19 in 2012 (Click on the image to view Table 1).

The study indicates that as the number of commodity index funds has increased, so has the volatility of prices in the soybeans futures market. Since 2007, investors are using speculative funds to diversify their portfolio investments. The combined increase in the number and use of these index funds along with the ability of investors to move in and out of these funds freely has introduced excessive volatility into the soybean futures market.

While the traditional fundamentals of supply and demand continue to be highly influential on long-term price movement, evidence has shown that nontraditional factors – crude oil prices, imports of soybeans to China and the number of commodity index funds – have become increasingly significant in recent years. In particular, short-term price movement appears to be influenced by these nontraditional factors as much as and probably more so than traditional supply and demand factors.

The increased volatility in soybean futures markets has several implications for agricultural producers in Louisiana. First, the costs associated with hedging strategies have and will likely continue to increase as market volatility increases. Minimum margin account levels have increased in response to the greater probability of negative price movement against market positions. The higher costs associated with both futures and options markets may prevent many producers from using these strategies and may limit the level at which these can be used in overall risk management.

The second effect of higher market volatility on farmers is the increased risk associated with poor marketing decisions. In a more stable market environment, producers could use these tools with relatively minimal downside risk. But with greater price movement, placing a hedge too soon (too late) could have significant financial implications to the producer. Historically, producers could purchase options as a relatively cheap level of protection. But now option prices have increased to the point that they have become significant investments.

While increased volatility in commodity markets has created some significant challenges for agricultural producers, it does not mean that traditional risk management tools are no longer useful. Certainly, the costs and potential risks associated with using those tools have increased, but they can still be used effectively and efficiently in managing market risk. What it has done, however, is increase the importance of market information and the ability of the producer to use this information in forming future price movement projections. Having a better understanding of those factors that influence the market is crucial for producers in making informed marketing decisions and helping to reduce the financial risks associated with implementing marketing strategies in a volatile environment. By understanding these nontraditional market factors, farmers can determine what adjustments might be needed in their traditional marketing strategies.