A Novel Approach for Cost-effective Production of Grafted Tomatoes 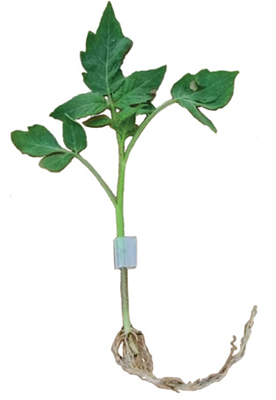 In the grafting process, both parts of the tomato plant are held together with a silicon clip. 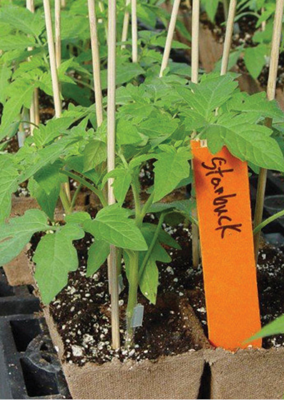 Grafting tomato plants is an old cultural technique practiced since the early 1900s in Japan, South Korea, and other Asian and Middle Eastern countries. The use of grafted plants was not common in North America until late in the last century, except in home gardens and by small organic tomato growers in the southeastern United States. Surveys conducted in 2006 showed the number of grafted seedlings in North America was more than 40 million, indicating a change of this trend. Tomato growers want to grow grafted plants to control soil-borne diseases, increase yield, improve plant adaptation to less-thanoptimum environmental conditions, and extend the harvest season.

Grafted tomatoes consist of two plants fused together. The bottom plant is the rootstock, which in most cases is a hybrid tomato variety that has diverse genetic makeup that makes it resistant to soil-borne diseases and nematodes. For example, it takes years to breed a tomato variety that is nematode-resistant. But with grafting a susceptible tomato variety on a nematode-resistant rootstock, the resistance is available immediately. The top part of the grafted plant is called the scion, and in most cases, it is a hybrid variety with desirable productive traits.

Home gardeners who have limited space and grow tomatoes in the same spot every year can benefit greatly from growing grafted plants to control soil-borne diseases that colonized the soil for a long time. Producing grafted tomato plants is costly, however, because of intensive labor input for propagation, optimizing the environmental conditions for healing the graft, longer periods needed for producing the transplants, and the additional costs of the rootstock. The high costs often discourage potential growers even with the additional benefits of increased yield and reduction of pest control costs.

The practice of grafting tomato plants leads to discarding the stumps of the scion cultivar after removing the tops for grafting. In most cases, the stumps are the remains of costly hybrid cultivars that were planted in multi-cell trays filled with commercial potting mixtures. The stumps have well-developed root systems that supported the scion plants for approximately three weeks before cutting the tops for grafting. If productive plants can be generated on the stumps, they can be used at the same farm or sold to other growers as nongrafted hybrids for returns that can defray part of the grafting costs.

A greenhouse study was conducted in 2010 and 2011 at the Red River Research Station in Bossier City to determine the feasibility of producing productive plants from the stumps. Seeds of the hybrid tomato varieties Geronimo, Quest and Starbuck (scions) and the hybrid tomato variety Maxifort (rootstock) were planted to produce seedlings for the grafting process. The tops of the three varieties and the rootstock were cut at three weeks of age above and under the cotyledon leaves. Both plant parts were held together using a silicon clip. The bottoms (stumps) of the three varieties were kept under the same growing conditions of the remaining seedlings to generate sprouts from the buds existing in the angle between the cotyledon leaves and the stump. One sprout was allowed to grow per stump for two to three weeks. The seedlings, grafted, and stump-sprout plants were transplanted into 5-gallon grow bags approximately five weeks following planting the seeds. Cultural practices consisted of standard recommendations for growing greenhouse tomatoes for fresh market production in Louisiana.

Fruit was harvested twice per week for 19 weeks. Marketable yield was determined by weighing fruit graded medium or larger during the first three weeks and during the remaining 16 weeks of harvest to reflect the effects of the early growth interruption of grafted and stump-sprout plants on yield.

This study indicates that producing productive plants from the stump sprouts is feasible and can be used to reduce losses associated with discarding the bottoms of plants used in grafting. Plants grown from the stump sprouts and the seeds both produced similar yields after the first three weeks of harvest. The most apparent reason for reduced early-season yield of the stumpsprout plants was their late growth. A simple remedy for that is to allow the stump-sprout plants to grow for five weeks after initiation before transplanting in the grow bags or selling commercially. This technique is normally followed in producing transplants from seeds.

The botanical components for producing plants from the stump sprouts are similar to those for producing plants from seeds. The stumps are left with the root system and the cotyledon leaves, both essential components for producing plants from seeds. This technique should eliminate wasting a valuable part of a good hybrid tomato variety and allow for the repeated use of the seedling containers filled with valuable potting mixtures. The grafting process should be timed to allow both the grafted and stump-sprout plants to grow for at least five weeks before planting in the grow bags or selling commercially. Tomato plants produced from the stumps can be sold at market prices to generate substantial income for graft-producing businesses.