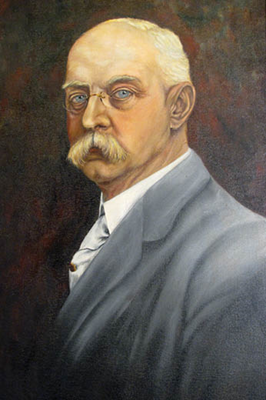 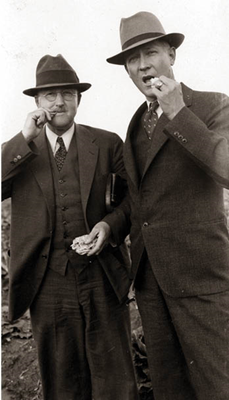 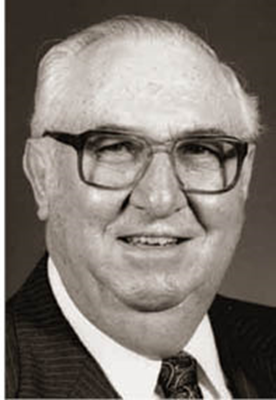 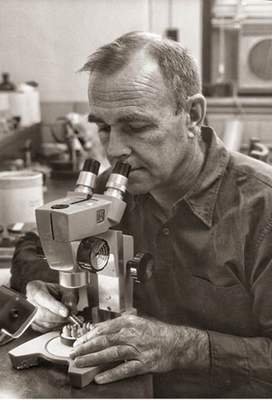 Many notable scientists contributed to research milestones during 125 years of the Louisiana Agricultural Experiment Station. Here are five.

William Haddock Dalrymple was born in Scotland in 1856 and worked as a banker in London and South Africa before becoming a veterinarian. Considered the father of veterinary medicine in the south central region of the United States, he came to LSU in 1889 as professor of comparative medicine and veterinarian of the experiment stations, only three years after graduating from the Glasgow Veterinary College.

Throughout his professional career, he was a member and officer in numerous veterinary and agricultural organizations and in 1905 was one of the charter members of the Louisiana Veterinary Medical Association.

He represented the United States as its official reporter on anthrax at the 10th International Veterinary Congress in London in 1914. That same year, the Baton Rouge State Times reported that Dalrymple was recognized by the Baton Rouge Chamber of Commerce for his work. The newspaper wrote in an editorial: “While East Baton Rouge has reaped much of the benefit from his labors, his work has not been confined to any locality. He has striven for the good of the state, and there are few sections of Louisiana that are not better off because of his efforts.”

He wrote two books, one on livestock sanitation and another on veterinary obstetrics. One of the main entryways onto the LSU campus, Dalrymple Drive, is named after him.

When Julian C. Miller came to Baton Rouge at the start of the Great Depression to become horticulture department head, he was one of only a few people in the state with a background in horticulture. The others were an extension agent, an instructor and a branch station professional. But Miller, who had been an ensign in the Navy in World War I, was a man with a mission to develop a horticulture program for the state. Miller had also been an extension agent in South Carolina and a graduate student in New York. He held faculty positions at North Carolina State University and the University of Oklahoma.

Miller had an uncanny ability to attract scarce federal funds to support a burgeoning research program in sweetpotato, Irish potato and other vegetable crops. His efforts led to the development of the first breeding program in sweetpotato. Meticulous lab notebooks exist to this day documenting the lengths he took in a quest to find plant material as far away as Cuba and Russia.

It paid off; these varieties moved the industry from subsistence to a nationally recognized industry shipping to all corners of the United States. His Irish potato breeding program generated some of the top varieties in the United States at the time, and many are still grown today. He was also an educator; more than 200 students received an M.S. or Ph.D. during his tenure. Many went on to be leaders at major universities across the United States and the U.S. Department of Agriculture. We also credit Miller as a leader in developing the federal National Plant Germplasm Repository in Colorado. Seed to this day from a vast array of species is stored for safe keeping at this facility.

Miller was an inspiration to all to strive for something great. Miller Hall on the LSU campus is named for him.

The L.D. Newsom Award for Outstanding Achievement is the highest award given to graduate students in the Department of Entomology, and it is named after Leo Dale Newsom, distinguished scholar, long-time department head and an agriculture leader in the movement for integrated pest management and controls in the use of pesticides. He died in 1987.

Born in 1915 in Shongaloo, La., Newsom attended Louisiana Polytechnical Institute (1936-1938) before transferring to Louisiana State University, where he received his B.S. in agriculture in 1940. As a student assistant, he investigated the biology of the sweetpotato weevil. He moved to Cornell University, where he started research on the biology and control of forage crop pests. From 1942 to 1946, he served in the U.S. Army Medical Corps (102nd Infantry) in Europe. He completed his Ph.D. at Cornell University in 1947.

Newsom then returned to LSU as an assistant professor in cotton insect research and remained there the remainder of his career. In 1966, he became the first faculty member in the College of Agriculture to be named Boyd Professor, the university's highest professorial rank. Newsom served as head of the Department of Entomology from 1954 to 1977, but maintained an active research program. He continued to lead research on soybean insects until his retirement in 1984, but maintained active field investigations and collaborative projects until his death.

Newsom contributed substantially to Louisiana agricultural productivity. He discovered, with graduate student J.R. Brazzel, the overwintering diapause of the boll weevil that became one of the key components – along with pheromone monitoring, crop residue management and limited insecticide use against residual populations – in the eventual elimination of this species as a major cotton pest. He also was instrumental in applying principles of integrated pest management of soybean pests as this crop grew in acreage in Louisiana. Newsom and co-workers pioneered and tested the concept of trap cropping for control of the bean leaf beetle and stink bugs in soybeans. By decreasing the total acreage sprayed with insecticides, trap cropping reduces negative effects on biological control agents and represented an important contribution to the development of integrated pest management programs for soybeans.

Newsom was an early and forceful advocate for the sensible use of pesticides. His first two decades of research involved studies of insects that affect field crops, and he witnessed first-hand both the benefits of pesticides for increasing crop yields and the serious problems resulting from overuse of broad-spectrum insecticides. Newsom documented the consequences of pesticide misuse: development of insecticide-resistant populations, resurgence of treated pest populations once natural enemies have been removed, adverse effects on nontarget organisms, and environmental effects of persistent residues of toxic chemicals. At the same time, he helped pioneer concepts of integrated pest management that have become the cornerstone of sustainable approaches to pest management.

He was particularly vocal in opposing the practice of applying pesticides based on plant growth stage or calendar date rather than on economic thresholds. His opposition to unrestricted use of pesticides for boll weevil eradication and fire ant control brought him into conflict with powerful groups that considered his work damaging to their own interests. Despite threats to his career, Newsom retained his convictions and emerged as a leader in the development of integrated pest management.

Among other developments, he encouraged coordinated efforts among crop production and crop protection disciplines. He noted problems that arise when crop protection recommendations are based on a narrow group. In his 1979 Founder's Memorial Award Lecture at the Entomological Society of America meeting in Denver, Colo., Newsom warned that “Despite general acceptance of IPM concepts, too frequently we continue to think as agronomists, ecologists, economists, entomologists, modelers, nematologists, plant breeders, plant pathologists and weed control specialists. Even worse, we continue to think as either basic or applied scientists in the still more narrowly specialized subdivisions of our respective disciplines. Obviously, we cannot continue to go our separate ways within the confines of narrowly proscribed, artificial disciplinary boundaries if we expect to move up the pest management ladder. What we do in one discipline is too likely to influence the chances of success in another to permit us to continue as in the past.”

Because of his remarkable knowledge of agriculture in general, and of pest management specifically, Newsom became a world authority on integrated pest management. He contributed to advances in pest management practices and their implementation through his appointment to national and international committees, such as the Panel of Experts on Integrated Control of Insect Pests (United Nations Food and Agriculture Organization), and through his service on several panels for the President's Science Advisory Committee. In addition, he helped advance these concepts locally through administration of his department. He was an early proponent of the role of universities in providing well-trained personnel to implement pest management practices in the field. In 1964, under his leadership, the LSU entomology faculty established the nation's first undergraduate curriculum in plant and animal protection.

Newsom’s widow, Alma Newsom, has kept close ties with the department and has participated in the presentation of several L.D. Newsom Graduate Student Awards for Outstanding Achievement, awards supported by generous donations from Newsom’s estate. In addition, Mrs. Newsom donated funds for the L.D. Newsom Endowed Professorship in the department.

Doyle Chambers joined LSU in 1964 and served as director of the Louisiana Agricultural Experiment Station for 21 years until he retired in 1985, adding the title of vice chancellor in 1979.

Chambers is most remembered for his role in helping create the LSU AgCenter as a separate institution with its own administration within the Louisiana State University System. He saw the need for directing funding of research and extension as critical to the future of agriculture in the state.

His plan proved correct. Though times have continued to be tough and funding always is inadequate, the separation boosted the visibility and effectiveness of all three branches of the land-grant system – research, extension and teaching.

Chambers’ most significant contribution to research was to bring together a fragmented operation into one unified experiment station. He was among the first experiment station directors to push for more grants and contracts, which ultimately led to the AgCenter’s well-respected and envied intellectual property program.

Immediately upon his retirement in 1985, Chambers established the Doyle Chambers Research Award, which has been given every year since to recognize the lifetime achievement of a scientist.

Through proceeds of a life insurance policy and careful planned giving, Chambers also established several endowments and scholarships, which were approved by the LSU Board of Supervisors in 2005. His estate also made funds available to add to the endowments for both the Chambers research award and the Tipton team research award.

Chester McWhorter was so revered as an agricultural scientist that on the day of his funeral, flags were flown at half-staff at each U.S. Department of Agriculture-Agricultural Research Station. Though never on the faculty at LSU, McWhorter is considered part of the history of the Louisiana Agricultural Experiment Station because he received his Ph.D. in plant physiology from LSU in 1958. McWhorter worked with the ARS in Stoneville, Miss., from 1958 until his retirement in 1992.

McWhorter was recognized internationally as the foremost authority on johnsongrass biology, ecology, taxonomy, physiology and control. The technology resulting from his research is widely used as a model for reducing losses caused by weeds, to lower costs of weed control, and to aid in conducting national market surveys.

His pioneering research led to the discovery that surfactants and other adjuvants increase herbicide activity and improve selectivity and safety. He discovered that a group of herbicides known as dinitroanilines selectively control the weed johnsongrass from both rhizomes and seed in soybeans. He also discovered that the postemergence activity of another widely used class of herbicides, the s-triazines, was greatly increased when applied in emulsions of paraffinic oil in water. This practice helped to reduce herbicide use rates. He invented several innovative herbicide application technologies, including the re-circulating sprayer, herbicide application in foam and wax bars, subsurface application of herbicides in soil with a subsurface blade, and soil injection of herbicides.

McWhorter will be remembered as a leader in weed science research and a great mentor and example to scientists throughout the world.