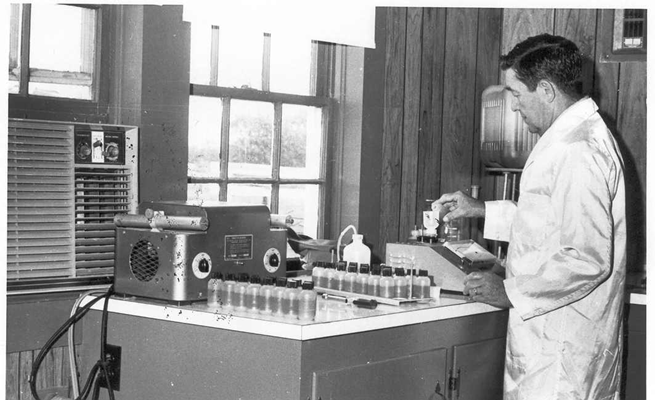 Billy Nelson in what was formerly the forage lab.

Harvesting corn for silage at the Southeast Research Station.

In the mid-1940s, several events occurred highlighting the need for an experiment station in the Florida Parishes of southeastern Louisiana. Farm boys were coming home from World War II, virgin long-leaf pine forests were gone, and cotton and other row crops in the area were on the decline.

At that time, open range laws still existed, and dairy cows were turned out into the woods for much of their forage needs. But the advent of the modern Holstein cow soon suggested a need for better pastures and feeds to support these “marathon runners” of the bovine breed.

In 1944, a research station was established on 844 acres of land formerly in timber and cotton that was renovated for pasture research. The station was charged with conducting applied pasture and management research in support of the growing dairy industry and was named the Louisiana Pasture and Dairy Experiment Station.

Early researchers such as H.D. Ellzey and Billy Nelson recognized the need to move from native forages to improved forage species that would provide superior biomass and nutritive value for dairy cows. Their work led to the introduction of Italian ryegrass, which subsequently became the backbone of most dairy forage programs in the area. For years these scientists studied ryegrass and other improved forages to determine proper seeding rates, fertilizer needs, weed control measures and harvesting techniques to maximize efficiency of forage production. Many of the recommendations used by forage and soil specialists in Louisiana today are based on the early work of these forage and dairy scientists.

In later years, the station scientists recognized the need for high-quality stored forages to help dairy cows perform well during times of poor pasture production. In the early 1970s and 1980s, the new round hay bales came into vogue, and farmers were advised by some that storing hay in barns was no longer necessary. Billy Nelson conducted studies on hay preservation that proved this incorrect and led to a heightened appreciation for protecting high-quality hay from the ravages of Louisiana’s humid climate. This research is often cited in extension workshops and forage texts to this day.

About this time, research at the station began to focus on storing forages as silage. This led to an interest in use of corn and other grain crops as silage. However, the erodible hills of Washington and Tangipahoa parishes were not suited for conventional tillage, which led to introduction of no-till and minimum-till planters into the area by Lee Mason and Allen Marvin. Their research proved that these planters could generate yields similar to conventional tillage methods while minimizing topsoil loss and pollution of local streams. These planting systems have become widely accepted in the area and have never been more important than today with burgeoning fuel and labor costs and the heightened awareness of farming’s role in the environment.

Crops grown from these no-till farming methods were evaluated by station nutritionist Ernest Morgan, who also began the era of nutrition research at the station. This research was and is the basis for recommendations on grain and mineral feeding that complements locally grown forages.

To complement the forage management and nutrition work, a modern Forage Quality Laboratory was established at the station in 1983. Lab manager Billy Nelson along with other scientists in the eastern United States worked to develop infrared spectroscopy methods for rapid forage nutritive value analysis. These techniques reduced the time required to determine nutritive value of forage from days to minutes and are widely used in academic and commercial forage analysis today.

In the 1990s the station scientists focused on research dealing with feed supplements to improve performance of pastured dairy cows. They learned that milk urea nitrogen (MUN) was a sensitive indicator of dietary protein adequacy in pastured milk cows, which led to the largest U.S. dairy cooperative, Dairy Farmers of America, including MUN in its milk composition analysis of milk produced in Louisiana and across the South.

About that time, additional research adapted the bale silage technology that originated in Europe to forage and climatic conditions of Louisiana. Currently, more than one-third of the dairy producers in Louisiana and Mississippi have adopted this forage-conservation technology for use on their farms.

In recent years station nutrient management specialist Vinicius Moreira has conducted research showing the need to lower phosphorus in dairy cow diets, which has the potential to improve farm profitability and reduce phosphorus entering streams and waterways in many dairying areas across the United States.

Research by station agronomist Kun Jun Han has shown that summer annuals with the brown mid rib trait are more digestible than conventional types, and these new forage options are becoming widely used by beef and dairy producers statewide.

In summary, forage research has been the primary focus at this station for many years. By necessity the dairy cow must have the highest quality forage economically available, a concept which has driven much of the research at this unit. Nonetheless, much of the forage and nutrition research at this unit can be, and has been, adapted for other forage-using animals such as beef, sheep, goats, horses and deer.