Forestry Research at the Hill Farm: A Heritage of Guiding Forest Management in Louisiana 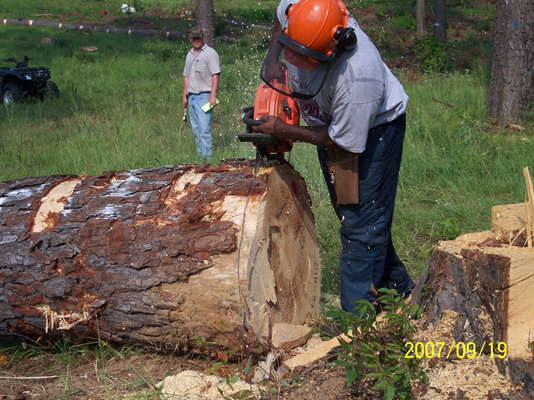 Collecting wood samples at the conclusion of a 48-year study on loblolly pine planting spacing and thinning scheduling in 2007. 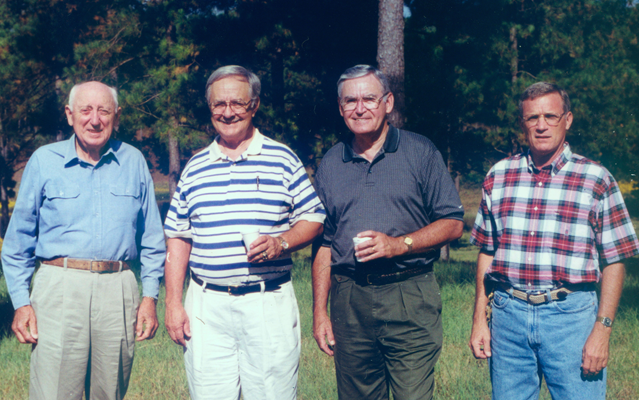 Past project leaders for forestry at the Hill Farm Research Station include, left to right, Thomas Hansbrough, Rodney Foil, Robert Merrfield and Terry Clason. This photo was taken in 1999. 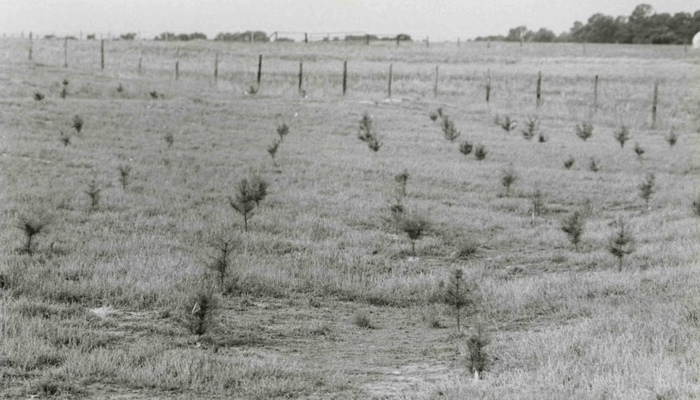 Newly plated loblolly pine at the Hill Farm Station in 1960.

Southern pine forests are a major part of the Louisiana landscape, covering nearly one-third of the state’s land. This abundant resource is the predominant source of timber for Louisiana’s forest products industry, which provides the Louisiana economy with $3 billion to $5 billion per year and nearly 21,000 jobs. Forest products (paper, sawtimber, furniture) are currently the top commodity among Louisiana’s $10 billion agricultural industry, and the forest products industry is the state’s second-largest manufacturing employer. Generations ago, southern pine forests covered much less of the state and contributed far less to its economy. The progression of an industry that increased its production of forest products more than 800 percent since the late 1940s has been aided by generations of forestry researchers based at the LSU AgCenter Hill Farm Research Station.

The landscape of north central Louisiana where the Hill Farm Research Station is located is nicknamed “pine hills country.” However, when the station was established in 1947, the region looked considerably different. Cotton and corn farms dominated the area, but a shift in land use was under way. The hilly topography and relatively less fertile soils of the region made it more difficult to farm profitably. The Soil Bank Program, predecessor to the modern Conservation Reserve Program, was created around this time to pay farmers to retire their land from farming. The program proved popular, and as farmers retired their lands from row-crop agriculture, their lands became forested through tree planting and natural seedling processes. Farmers were drawn to growing forests for timber on their retired lands because the housing market was rapidly expanding as suburbs were built across the post-World War II United States. The land use changes that took place in north Louisiana occurred across much of the rest of the southeastern United States. As such, the practice of tree planting exploded, and tree nurseries strained to produce enough seedlings to meet demand.

It was this conversion of old fields into southern pine forests that would drive the research program of the first forestry project leader of the Hill Farm Research Station, Thomas Hansbrough. Hired immediately after graduating with a B.S. in forestry from LSU in 1949, he initiated research that would have an impact on loblolly pine planting practices that continues throughout the southeastern United States today. At a time when the convention was to “plant ‘em thick” (greater than 700 trees per acre) to be sure there were more than enough trees that would survive to get tree plantations established, Hansbrough began research trials on tree spacing to find the optimum number of trees to plant. His research determined that contrary to conventional wisdom, planting at 400 to 500 trees per acre promoted better early growth in loblolly pine plantations by reducing tree-to-tree competition.

In 1958, Robert Merrifield joined Hansbrough’s forestry research program at the Hill Farm Research Station. The two continued to refine knowledge about early-plantation research for loblolly pine in the region. Merrifield found dramatic increases in loblolly pine growth in response to fertilization at the time of planting. Merrifield’s research was some of the earliest done on fertilization of loblolly pine. Hansbrough and Merrifield demonstrated that wood quality was improved by pruning limbs from the lower 16 feet of the tree, resulting in wood relatively free of knots. To enhance survival and growth of newly planted seedlings, they also tested the efficacy of insecticides such as carbofuran to control insects including the pales weevil and the Nantucket pine tip moth. Merrifield remained at the Hill Farm Research Station until 1967.

By the 1960s, the plantations established in the 1940s and 1950s were getting large enough to harvest as pulpwood, and optimal timing and levels of thinning (partially harvesting) loblolly pine plantations became a research focus at the Hill Farm Research Station. In 1960, Rodney Foil joined the Hill Farm Research Station as forestry project leader to replace Hansbrough, who had left to establish the forestry school at the University of Kentucky. Foil’s research focused on optimum thinning practices. The convention at the time was for paper mills to accept only trees with a diameter of 4 inches at the end of the log. Foil showed that thinning trees earlier, when the diameter at the end of the log was 2 inches, was of greater benefit to loblolly pine plantation growth because trees were harvested before tree-to-tree competition for light, nutrients and water reduced tree growth. Foil also demonstrated that in the sandy upland soils of north Louisiana, the primary competition among trees was for water rather than light, which was the prevailing wisdom of the time. Foil served as forestry project leader at the Hill Farm Research Station until 1967.

Foil was succeeded by Robert Shepard, who served as forestry project leader from 1969 through 1974. In his time as project leader, Shepard continued the experiments of Hansbrough, Merrifield and Foil. Shepard inherited those experiments as the trees were reaching the size at which they could be harvested as the most valuable forest product, sawtimber. Shepard found that among all planting spacings established by Hansbrough and Merrifield that the 10-foot-by-10-foot spacing produced the greatest sawtimber yields and revenue. Shepard also notably compared the practice of planting loblolly pine seedlings to the practice of allowing forests to regenerate from seed of nonharvested trees, which was gaining some popularity at the time because of its cheaper cost. Shepard showed that by the time trees reached the size at which they are harvested as pulpwood that forests established by planting seedlings had greater yields and better tree uniformity than those established by natural seeding.

By the mid-1970s, plantations of the region established during the 1940s and 1950s were being harvested as sawtimber, followed by replanting. Unlike the old field conditions into which the seedlings of a generation prior had been planted, newly planted seedlings of the 1970s faced aggressive competition from a vast seedbank of herbaceous grasses and hardwood sprouts that had naturally accumulated in plantations. Foresters were seeing lower growth of plantations under these conditions than had been seen before. Overcoming this competition obstacle to optimize loblolly pine plantation growth became an integral part of the forestry research program of the Hill Farm Research Station under the guidance of Terry Clason, who joined the station as forestry research project leader in 1976. Clason’s research helped to show that it was the competing vegetation that was limiting plantation growth across the southeastern United States more than soil factors. Clason tested the efficacy of several herbicides, and his research helped bring to market several herbicides integral to loblolly pine plantation management today, including hexazinone, imazapyr, sulfometuron and metsulfuron, which were developed under the trade names of Velpar, Arsenal, Oust and Escort, respectively.

Another novel line of research conducted by Clason was the development of an agroforestry management system called silvopasture for southern pine. With silvopasture management, Clason showed that forages for cattle could be established and managed under loblolly pine trees and that return on investment from silvopasture was better than cattle and loblolly pine managed separately. Clason integrated planting and thinning information gained from research begun by Hansbrough, Merrifield and Foil into guidelines for planting and thinning loblolly pine silvopastures. He was the longest-serving forestry research project leader of the Hill Farm Research Station, retiring in 2001.

By the early 2000s, timber values were at an all-time high because of the growth of the U.S. housing market. Producing more timber more quickly became a research priority at the Hill Farm Research Station under the direction of research project leader Michael Blazier, who began his career at the station in 2003. Blazier conducted research focused on optimizing the use of fertilizer to improve loblolly pine plantation growth. Blazier showed that contrary to the conventional practice of fertilizing plantations with nitrogen soon after mid-rotation thinning, plantations on the upland sandy soils of the region responded more fully to nitrogen fertilization by waiting at least one year after thinning in order to match plantation nitrogen demand and supply. Continuing work begun by Clason on planting container seedlings instead of bareroot seedlings that are more commonly planted in the region, Blazier showed that return on investment for plantations on upland, rocky soils of the region was improved by planting container seedlings. Studies comparing the best conventionally bred loblolly pine seedlings of the Southeast to newly-developed clonal loblolly pine seedlings demonstrated greater growth and better form of clonal seedlings when planted in north Louisiana.

In recent years, the forest products industry has faced one of its greatest challenges with the drastic downturn of the U.S. housing market. In response to this challenge, new research projects are under way at the Hill Farm Research Station to explore the prospect of diversifying loblolly pine plantations to produce new products, such as biofuels, in addition to conventional forest products. Additionally, growth and yield data from the legacy of studies conducted at the station are being used to develop economically optimal management practices for today’s market conditions.

All of the former forestry project leaders continued to shape forestry and agriculture after their tenures at the Hill Farm Research Station. Tom Hansbrough returned to the LSU AgCenter from Kentucky and served as Director of the LSU AgCenter School of Forestry, Wildlife, and Fisheries until his retirement. One LSU forestry student influenced by Hansbrough’s pioneering ideas on loblolly pine management was Terry Clason. Robert Merrifield had an illustrious career at Texas A&M University. Merrifield became the first head of its forest science department, and by his retirement Merrifield was Deputy Director and Head of Texas AgriLife Research. Rodney Foil likewise had a successful career at Mississippi State University, becoming head of the forestry department and eventually director of the Mississippi Agriculture and Forestry Experiment Station. Robert Shepard had a successful career as a professor at the University of Maine, retiring in 2005. Terry Clason continues to draw from the knowledge he gained in his research career to develop forest establishment and improvement programs for the USDA Natural Resource Conservation Service as state forester for Louisiana. While he was at the Hill Farm, Clason gave many tours of his research projects to forestry students from nearby Louisiana Tech University. One of the students that learned about tree spacing influences on plantation and silvopasture development on those tours was Michael Blazier.

Forests are unique in agriculture because of their long-lived nature. The management decisions of one generation of owners strongly affect what is possible for the next generation. When done well, forest management leaves the next generation with an invaluable resource. Such has been the case at the Hill Farm Research Station. Each forestry research leader has been able to build from the biological and ideological legacy of his predecessor to provide forest owners and managers of Louisiana and the rest of the southeastern United States with new forest management options.