Dairy Research Made a Difference 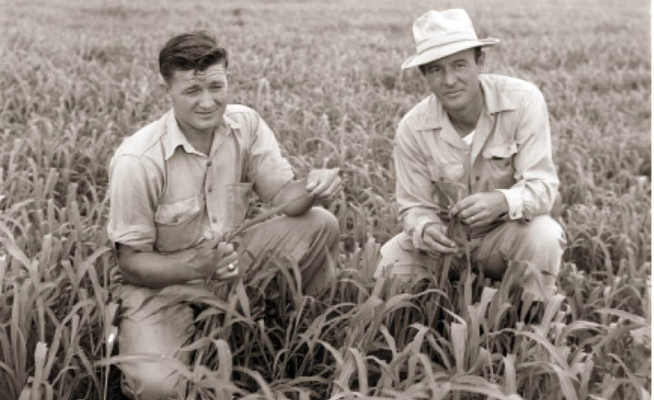 Milk production in Louisiana doubled between 1950 and 1975, in part because of the research of the Louisiana Agricultural Experiment Station. Two of the pioneers in dairy research, pictured in about 1950 at the Southeast Research Station, were Billy Nelson, at left, and H. Dewitt Ellzey. Nelson wenton to become the first director of the Forage Quality Laboratory at the station, which provided dairy and beef cattle producers with quick and accurate analysis to optimize production. Ellzey’s research helped identify improved forage varieties, especially for annual ryegrass. 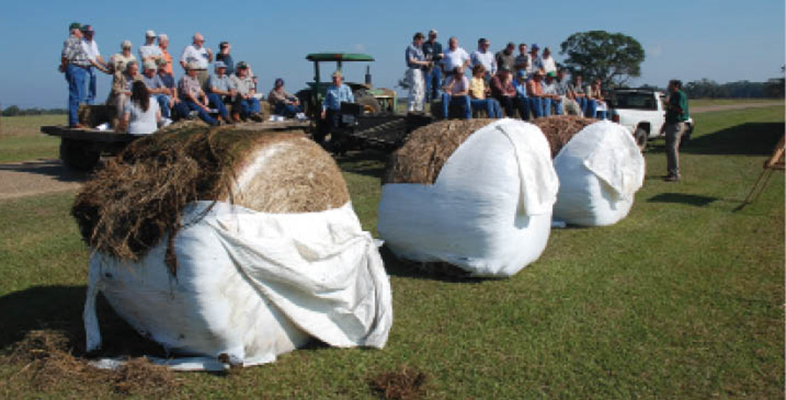 More than a third of the dairy producers in Louisiana and Mississippi have adopted the bale silage system, which was evaluated and adapted by Mike McCormick, at right telling farmers about the system at a field day at the Southeast Research Station. Bale silage has a higher nutritive value than hay because of seasonal poor hay drying conditions.

Development of dairy waste lagoon systems by Jim Beatty and Vinicius Moreira greatly reduced the dairy industry contribution to point-source pollution and assisted in vastly improving water quality of waterways in the Florida Parishes, which ultimately assisted in returning Lake Pontchartrain to abody of water suitable for recreation and commercial fishing as well as swimming. Above is a “floatingisland” that was grown in the lagoon at the Southeast Research Station. The plants use nutrients from the waste to grow. 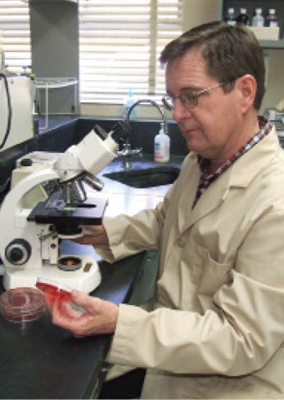 Dairy farms were thriving in northwest Louisianain 1960, but problems with mastitis threatened to destroy the industry. A mastitis laboratory was established at the Hill Farm Research Station in1968. Scientists there tackled the problem and were able to get it under control, which saved the industry in the state. When mycoplasma mastitis, a highly contagious form of the disease,was first detected in Louisiana in 2002, Bill Owens, above, developed a testing system that,once again, saved the Louisiana dairy industry. 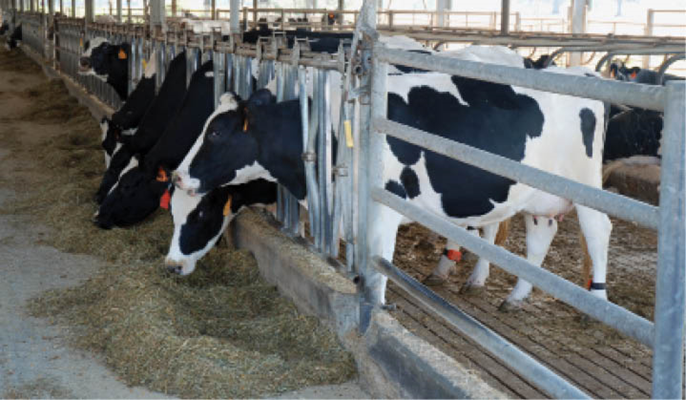 The LSU AgCenter operates model dairy farms on the campus in Baton Rouge and at the Southeast Research Station in Franklinton.

Despite the declining dairy industry, Louisiana Agricultural Experiment Station research in dairy science, both in dairy foods technology and dairy production, has contributed greatly to the success of the dairy industry in Louisiana.

Dairy research has been conducted by scientists in three locations during the history of the Experiment Station. A Department of Dairy Science was established in 1949 and existed until it was folded into the School of Animal Sciences in 2009. Dairy scientists made numerous contributions to both the dairy foods and production areas. They have contributed to improvements in nutrition, genetics, reproductive physiology and calf growth and development. The research in dairy production has enabled producers to improve efficiency of production, which has led to more milk per cow during the past 20 years.

In addition to the research efforts in dairy science on the Baton Rouge campus, research at the Southeast Research Station near Franklinton, which was established in 1944, has contributed to improved dairy management in the areas of nutrition, waste management and agronomy.

In addition to the research capabilities, the Southeast Research Station houses the LSU AgCenter Forage Quality Lab, where producers can submit samples for nutrient analysis of their feedstuffs. The forage quality and nutrient management research is extremely important not only for helping dairy producers improve milk production but also in minimizing nutrient runoff into the environment.

Environmental impact of agriculture production continues to be of concern. The contributions of LSU AgCenter dairy scientists have made a big difference not only in Louisiana but in other areas of the country as well.

While tremendous contributions have been made in nutrition, reproduction, genetics and calf management by LSU AgCenter dairy research scientists, another major component of dairy research has been conducted at the Hill Farm Research Station in Homer, La. The Hill Farm was established in 1946, but mastitis research did not begin until 1960 under the leadership of station director Nelson Philpot.

Since its beginning, research in dairy cattle mastitis has gained recognition not only in Louisiana, but nationally and internationally as well. In 1968, the Mastitis Laboratory was established and further expanded in 1985. This laboratory not only enhanced the research capabilities of the scientists but also provided dairy producers with a means of improving herd management through identification of mastitis-causing organisms.

Mastitis research conducted during the past 42 years has been conducted by four AgCenter scientists: Nelson Philpot, J.W. Pankey, Steve Nickerson and Bill Owens. Areas of research have included causes, prevention and treatment of this costly disease. The research efforts have also identified a problem with first-calf heifers and their susceptibility to mastitis prior to their first lactation, and thus management strategies for prevention have been identified. Now producers nationwide are using these management practices to improve animal health in their herds.