Pecan Station: One of a Kind in the USA 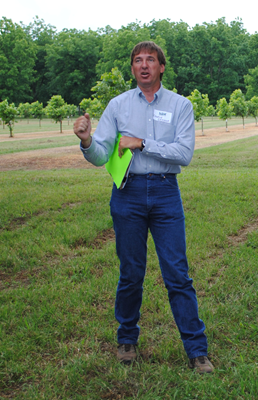 Charlie Graham is a horticulturist at the Pecan Station. 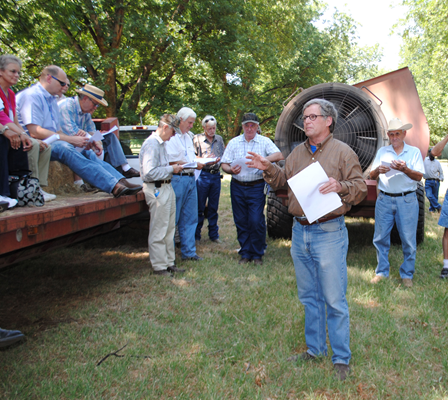 Michael Hall, entomologist, teaching at a field day at the Pecan Research-Extension Station. 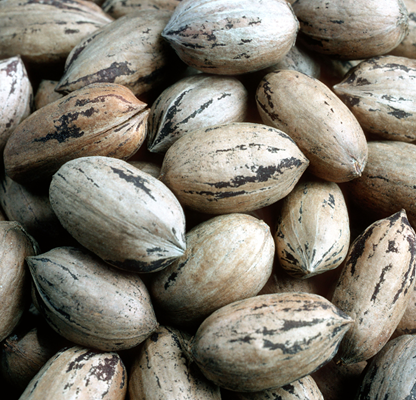 Pecans in the shell. 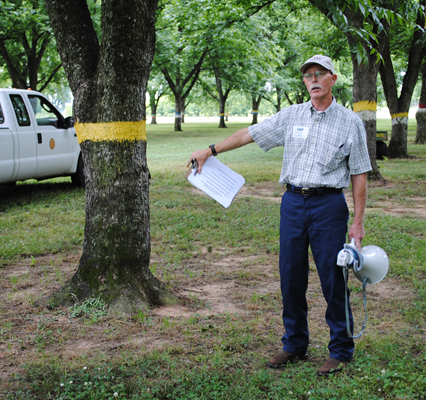 Randy Sanderlin, a plant pathologist, is the research coordinator at the Pecan Research-Extension Station in Shreveport. 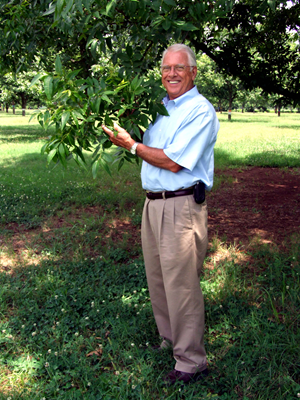 Jere McBride was the station's first superintendent, beginning in 1973. He remained over the Pecan Station until his retirement in 2008 from his post as director of the Northeast Region of the LSU AgCenter.

Louisiana has a strong cultural history with the development of the pecan as a commercial crop. In fact, the pecan industry began in Louisiana. The pecan, one of the few plants native to North America, was present as early as the Cretaceous Period and was a significant food source of the native peoples of the central and southern regions long before the Spanish explorers described the pecan in their early records. In tribute, the U.S. Department of Agriculture names its releases of pecan varieties after North American Indian tribes.

The first recording of pecan sales was from the Port of New Orleans in the 1700s. Through the middle of the 19th century, it was generally accepted that nut trees could not be selected by grafting the way fruit trees could, and attempts to graft pecan had failed. In 1846-47, a slave gardener named Antoine at Oak Alley Plantation in St. James Parish succeeded in grafting 16 seedling trees with graft wood taken from a tree at a nearby plantation. Eventually, he grafted 126 trees and developed the first grafted pecan orchard. This first pecan variety was eventually named Centennial. Oddly, grafting to select trees for pecan production was not pursued again until after the Civil War. In 1877, another Louisiana planter, Emil Bourgeois, also of St. James Parish, revived pecan grafting. The following decades saw many pecan selections from across Louisiana as a national pecan industry began to emerge. Correspondingly, the first sale of grafted pecan trees through a commercial nursery was by the Richard Frotscher and William Nelson Nursery of New Orleans in the 1880s.

Research in LSU’s Horticulture Department supported the advancement of pecan production from the early 1900s through the 1980s. Because of a strong producer constituency in the Shreveport area, a USDA Pecan Field Laboratory was established a few miles south of Shreveport in 1930. About 100 acres of land and buildings were donated by Caddo Parish for the station. During the next 43 years significant contributions to the pecan industry were made based on the research conducted at this location and through cooperative work with owners of private orchards. Contributions include the discovery that zinc is a critical nutrient for pecan growth and nut production. This may be the single most important cultural improvement for the commercial industry in its 130-year history. Zinc application is now a standard practice in U.S. pecan production. Other advances at the station while under USDA management were a definitive study on seed stock sources for rootstock growth, a classic work on pecan kernel development, identification of a phytoplasm as the cause of pecan bunch disease, numerous variety evaluations, and descriptions of several disease and insect problems within the Louisiana production area.

In 1973, the USDA transferred the station to the LSU AgCenter. Since then, the Pecan Research-Extension Station has served as a model for new endeavors. It was the first to have an all Ph.D. faculty and the first to specify joint appointments between the Experiment Station and the Cooperative Extension Service. The station was then and still remains the only university branch station in the country dedicated to pecan research and extension work.

The LSU AgCenter Pecan Research-Extension Station has contributed to the advancement of the Louisiana and southeastern U.S. pecan industry through research and extension programs. Two varieties of Louisiana origin, Melrose and Moreland, were released with support from data provided by the Pecan Station, and the station has been a cooperator in the release of three USDA varieties – Creek, Houma and Oconee. Station achievements related to pecan production have included introducing Louisiana producers to leaf sampling for monitoring tree nutritional status, which is especially important for zinc and nitrogen levels. An expansion of the original rootstock study at the station identified the best rootstock for Louisiana from the ones commonly used by nurseries. Study results demonstrated that by using nuts of the Moore variety as a rootstock source, trees grew at a faster pace, had greater early nut production, and continued to outperform other rootstocks in total nut production for years after grafting. Other studies confirmed the usefulness of nut crop thinning to reduce the production effects of natural alternate pecan bearing. Work at the station also established that it was possible to quickly bring old, abandoned Louisiana pecan orchards back into production with intensive management.

Entomologists at the Pecan Station helped develop methods of detecting pecan weevils and taught growers to use weevil traps for management of this critical insect. They found that the pecan scorch mite is a major pest of pecan in Louisiana. Its life cycle was determined, the existence and population dynamics of natural predators of the scorch mite were studied, and the effects of various insecticides on the populations of the scorch mite and its predators were evaluated. The first data on the development of insecticide resistance by an arthropod pecan pest, the scorch mite, was reported from the Pecan Station. The distribution of the pecan casebearer, a major nut pest, within Louisiana was mapped. This research saved tens of thousands of dollars annually by eliminating the needless spraying for an insect in production areas where it is not typically a problem. The within-tree distribution of the pecan phylloxera insect and seasonal effects on spring emergence of phylloxera were investigated. A simple monitoring method using sticky cloth tape as a trap for this nearly microscopic insect that can be used by producers to time insecticide application for effective control was developed at the station.

Pecan scab disease is a major threat for commercial producers, and multiple applications of fungicide are often needed to avoid severe crop loss. The control of pecan scab has transitioned from a preset number of fungicide applications (10-12) to using rainfall frequency and disease incidence as the base for determining application need, which results in four to eight fungicide applications in most years. Detection of statewide scab pathogen resistance to the benzimidazole group of fungicides led to the removal of this fungicide from the recommendations for control of this disease in Louisiana. A study of pecan scab disease produced guidelines on the amount of nut damage that could be expected from different severities of infection at varying times in the nut development process. Studies with other diseases have included epidemiological work with the vein spot disease of pecan to determine the weather conditions that result in dissemination of the spores that initiate the disease, and the evaluation of fungicides led to improved recommendations for specific control of vein spot.

Knowledge of the cause and spread of pecan bacterial leaf scorch disease was developed at the Pecan Station. Studies produced information demonstrating graft and insect transmission of the pathogen to pecan, identification of some insect vectors including two previously nonreported spittlebug vectors of the pathogen, data on the movement of the disease into new orchards, and the rate and pattern of disease spread. A simple hot-water treatment prior to grafting was shown to essentially eliminate the pathogen from infected graft wood, which can prevent instant infection of newly grafted trees with this pathogen.

All insecticide and fungicide groups labeled for pecan use were tested by Pecan Station scientists as part of the EPA registration process. Similarly, the Pecan Station has been involved in the development or evaluation of all recommended cultural procedures for the commercial pecan industry. Through eight decades, the Pecan Station as either a USDA or an LSU AgCenter facility has worked to serve the pecan industry and produced valuable information about this agricultural commodity.

· Relationship of crop damage to time of scab disease development.

· Studies on cause and epidemiology of pecan bacterial leaf scorch disease.