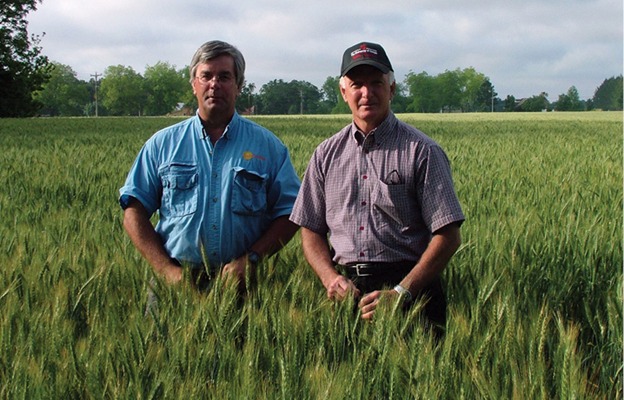 Steve Harrison and University of Georgia wheat breeder Jerry Johnson in a foundation seed field of LA01110D-150 wheat, which was released in 2012. Through the Sungrains partnership, seed can be increased for release by the University of Georgia Seed Development Commission, which is efficient and cost-effective. (Photo by Dan Bland) 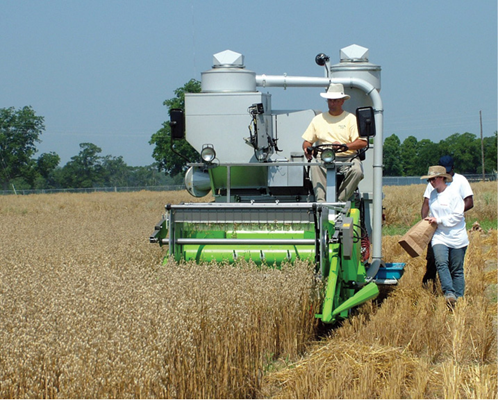 Kermit, the small plot combine with full electronics, was purchased in 2009 to support the wheat breeding program. Such specialized equipment often costs as much or more than a full-scale farm version. (Photo by Kelly Arceneaux)

The LSU AgCenter wheat research program has evolved over the past two decades into a full-scale breeding and genetics effort with significant economic impact and intellectual property value. The varieties developed by the AgCenter program and its Sungrains partners account for a large proportion of the wheat acreage and all of the oat, triticale and rye acreage grown across the southern United States each year, contributing millions of dollars to the farm economy. These crops are important as cash grain crops, in pastures to support the livestock industry, in conservation tillage, and for use as wildlife food plots.

Sungrains
Sungrains, short for Southeastern University Grains, was formed in 2005 as a partnership among five universities to develop improved wheat, oat, triticale and rye varieties for the entire region from North Carolina to East Texas. It is an unprecedented example of collaboration across state boundaries to efficiently utilize available resources for the benefit of the entire agricultural community. Sungrains initially included the LSU AgCenter as the founding institution, University of Georgia, North Carolina State University, University of Florida and Clemson University. Clemson dropped out when they discontinued their breeding program. Sungrains was endorsed for a second five-year period in 2011, and the University of Arkansas and Texas A&M AgriLife joined the partnership.

Germplasm
Germplasm is the lifeblood of any wheat breeding program. It is the assemblage and distillation of desirable genes that contribute to the genetic potential of a wheat variety in a given environment or region. The longer and more intensely a breeding program develops germplasm for a given region, the more valuable that germplasm is as intellectual property property in churning out improved varieties. The germplasm base of the AgCenter program is uniquely adapted to the Gulf Coast region and has produced a number of highly productive varieties valuable for growers in the area.

Economic Impact
It takes 10 to 12 years of research to develop a new wheat variety, and program expenses are several hundred thousand dollars per year. But when a successful variety is released, it provides many millions of dollars in economic stimulus to the farm economy. As an example, Terral LA841 was released by the LSU AgCenter in 2002 and became the dominant wheat variety across the state and region within a few years. It has contributed millions of dollars each year to the local economy through higher yields and lower production costs, paying for program costs many times over. LA01110D-150 wheat released in the summer of 2012 will be licensed and available to growers starting in the fall of 2013 and should increase yields and profitability for growers for the next 10 years. Foundation seed was produced by the Georgia Seed Development Commission in 2012 under the auspices of the Sungrains agreement at no cost to the LSU AgCenter program, with commission costs being recovered through sales of foundation seed to the licensing company.

The LSU AgCenter breeding program has developed and released 10 oat varieties and six wheat varieties since 2005, which have all been exclusively licensed to various seed companies for distribution to growers. The program has also contributed to the development and release of numerous other varieties through the Sungrains partnership. All of these varieties carry a royalty fee returned to the AgCenter to help support the breeding program and the institution. Sungrains breeders have released 14 oat, 18 wheat and two triticale varieties in that same timespan.

This all changed starting around 1980 when tax dollars to support agricultural research for the public benefit began to decrease. The LSU AgCenter wheat program was fortunate enough to gain support of the Louisiana Soybean and Grain Research and Promotion Board when a feed grain referendum was passed in 1985. Although the initial funding provided by the board was only a small portion of the total program costs, the effect was immediate and significant. This was discretionary funding that allowed for hiring of additional student workers and support, thereby laying the foundation for development of the program as it exists today. The board’s funding increased the size and intensity of the program and progress toward variety development and germplasm enhancement.

This leads to the conclusion that wheat germplasm and varieties are a complex example of the value and ownership of scientific research products as intellectual property. Questions such as “Who owns the germplasm?”, “How should it be protected and utilized?”, and “Who should benefit from it?” are not easy to answer. This is, after all, a public plant breeding program financed in part by public tax dollars, although much of the funding is self-generated. Why should a grower pay a premium for a wheat variety marketed by a seed company if the variety came from a university program?

Unfortunately, without several hundred thousand dollars per year in support, public plant breeding programs cannot survive. Finding a balance between public and private funding with the overall goal of ensuring economic viability of the agricultural community is a significant challenge that requires consideration of all options.

Utility Patents, PVPs, Brown-Bagging
Wheat and oat varieties developed by the program are protected under the Plant Variety Protection Act, which permits grower-saved seed but prohibits brown-bagging or sales of the variety for planting by anyone other than the licensee. This form of intellectual property protection ensures that a variety has economic value to the company that licenses it and that the institution receives a return on investment to support additional research and variety development. Some varieties are protected by utility patents, which generally do not permit grower plant-back and are more restrictive in how the seed may be used. Patents for all AgCenter-developed varieties remain AgCenter property, and only the exclusive marketing rights are licensed.

Licensing and Variety Release
A wheat variety goes through eight to 10 years of research and development, followed by about two years of seed increase, before it reaches a grower’s field. In the final stages, seed purification occurs, and the breeding line is licensed as a variety to a commercial entity that has the infrastructure capable of producing, processing and distributing seed to growers. The primary concern when awarding a variety license is ensuring that the variety is produced and made available in a manner that serves growers. Also important is the economic return to the LSU AgCenter and subsequently program support to continue research and variety development.

When growers purchase seed of a variety licensed by the LSU AgCenter or a Sungrains partner, they are paying about $0.85 per bag in royalties to support the program, or about $1.50 per acre. This is a small portion of the crop value and certainly a worthwhile investment to ensure a continued supply of productive and locally adapted varieties available at a competitive price.

Shared Intellectual Property
Germplasm is the lifeblood of a plant breeding program, but it has value only if it is used, shared and enriched. Progress is made over time by intermating elite germplasm to produce even better progeny. The germplasm base of a breeding program has to be continuously enriched with new genes that meet the challenges of new diseases, insects and end uses. It has to be shared with other breeding programs and evaluated on a regionwide basis. Cleary, there is not enough wheat acreage in the Southeast for every state to have a wheat breeding program, which is true of most crops, so programs have to reach across state boundaries to be sustainable.

Within Sungrains there is complete and open sharing of intellectual property, including all germplasm, research projects and resources such as testing environments and equipment. Scientists within Sungrains routinely co-develop and co-release new varieties. Sungrains nurseries are much more efficient because each breeder’s material is tested across the entire region without the need to travel out of state for planting, notetaking and harvesting. Each breeding program has a vested interest in ensuring the success of Sungrains because they share revenue from new varieties and credit for that success. Sungrains has been a remarkably successful endeavor because the breeders and their respective institutions recognize the value and need to share intellectual property to preserve it.

Future of Wheat Breeding, Partnerships and Protecting Intellectual Property
There has been a lot of big-industry investment in wheat research in the past five years, and these companies will continue to play a role in providing wheat varieties to growers. Wheat yield must increase for the crop to be sustainable. To achieve that goal requires research investments comparable to those in soybeans and corn. The changing landscape will require that Sungrains and other university breeders partner more closely with industry. Such partnerships will meld the valuable germplasm and scientific expertise of Sungrains programs with the tremendous corporate infrastructure and economic engines to produce superior varieties for growers.

It is important that Sungrains and the LSU AgCenter protect the integrity of the germplasm base, which has been developed over the past 30 years to make sure growers have a supply of locally adapted and highly productive varieties at affordable cost, while at the same time using all available university and industry tools and technologies to provide a superior product. The future of wheat in Louisiana requires a willingness to change and adapt.

Steve Harrison is Walker T. Nolin Professor in Agronomy in the School of Plant, Soil & Environmental Sciences and a wheat and oat breeder