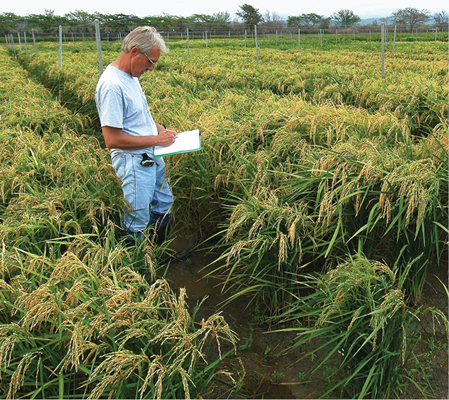 Steve Linscombe, director of the LSU AgCenter Rice Research Station and rice breeder, was surrounded by rice country as a boy in the town of Gueydan.

“I grew up working on a rice farm, starting when I was about 13 for a cousin, Keith Hair,” he recalled. “He took me under his wing.”

The young Linscombe learned how to grow rice from pulling red rice, driving a tractor and hauling 80-pound sacks of fertilizer. He worked for an uncle, Raleigh Linscombe, who owned a farm supply business in Gueydan.

Linscombe even grew his own rice crop in his family’s backyard in a 100- square foot plot he impounded with levees dug with a shovel and applied herbicides and fertilizer. “It actually did fairly well.”

He took vocational agriculture at Gueydan High School, where his father was principal.

He completed his undergraduate work in animal science at LSU, but remained interested in production agriculture. He obtained his master’s degree in agronomy from LSU under Sonny Viator, director of the LSU AgCenter’s Iberia Research Station, who was instrumental in his research training. He then went to Mississippi State University.

Linscombe said he worked alongside several Mississippi State scientists who studied a variety of crops. But he eventually focused on forage research, and he conducted a genetic study of tall fescue for his doctoral project. He credits Clarence Watson for preparing him for a career. “He groomed me as a future scientist. I owe a lot to him.” Watson is now the director of the University of Arkansas Experiment Station.

Linscombe returned to Louisiana and the LSU AgCenter in 1982 as the rice specialist.

In 1988, he became the rice breeder at the Rice Research Station and has played an integral role in the development of the Clearfield rice technology.

“There were a number of people responsible for getting where we are today with Clearfield,” Linscombe said. “Certainly, it all started with Tim Croughan, who did the mutation work and isolated the plant resistant to the herbicide imazethapyr. If it weren’t for his work, we wouldn’t have Clearfield today.”

But Linscombe said establishing Clearfield and maintaining its status in the southern U.S. rice-growing region has required a considerable amount of work from scientists and their research associates.

Linscombe bred most of the varieties, and this year Clearfield varieties and hybrids made up 60 percent of the rice acreage in the South and more than 80 percent in Louisiana.

He said Eric Webster, LSU AgCenter weed scientist, had a key role with finetuning the herbicide used with Clearfield rice–Newpath. “He’s done a substantial amount of work in optimizing performance of the herbicides in the system as well as minimizing the impacts of outcrossing.”

Don Groth, LSU AgCenter pathologist, has been instrumental in helping to incorporate higher levels of disease resistance into Clearfield varieties.

Linscombe has become recognized as one of the top rice experts in the world, traveling extensively to all major ricefarming regions and speaking at numerous international conferences.

“His leadership has helped vault the LSU AgCenter to the position of premier rice research organization in the western hemisphere, perhaps the world,” said John Russin, LSU AgCenter vice chancellor for research.