Quest for the next Beauregard 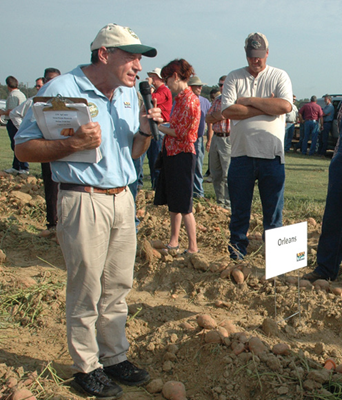 Don LaBonte in a reseach plot at the Sweet Potato Research Station in Chase, La. (Photo by Linda Foster Benedict)

A Springfield, Ill., native, Don LaBonte headed south immediately after receiving his doctorate from the University of Illinois in 1988 and has had a long and productive career breeding sweet potatoes in Louisiana ever since.

LaBonte was quickly introduced to the culture of south Louisiana at a field day near Ville Platte. “Many of the farmers were speaking in French, which I did not understand. But they graciously accepted me and made me feel welcome. I knew this was a great place to do research.”

Having a research station dedicated to sweet potato production helps the breeding program. “The Sweet Potato Research Station in Chase gives me the opportunity to look at thousands of varieties each year. It is so crucial to variety development,” LaBonte said.

The ability to produce more premium No. 1 potatoes will translate to more revenue for the grower. Labonte estimates that only around 50 percent of potatoes are premium grade. Increasing the number to 60 percent or more will make a big difference to farmers and their bottom line.

LaBonte is encouraged by the growing consumption of sweet potatoes in the United States. “I believe that restaurants actively promoting sweet potatoes on their menus have contributed to more people eating them. That is a positive for the industry.”

Breeding specialty-type sweet potatoes is a new venture for the breeding program. Two varieties that have found commercial success are Bonita and Murasaki. Bonita is a white-fleshed sweet potato that is popular in Hispanic markets.

“The great majority of sweet potatoes grown in the world are white-fleshed. It is around 98 percent,” LaBonte said.

Murasaki is another white-fleshed potato, but its unique characteristic is that the skin is a purple hue. LaBonte said that it is popular in Asian markets.

LaBonte finds sweet potato breeding a fulfilling career. “I get the most satisfaction when growers tell me that a new variety is making a difference for their operation. It is the best compliment.”