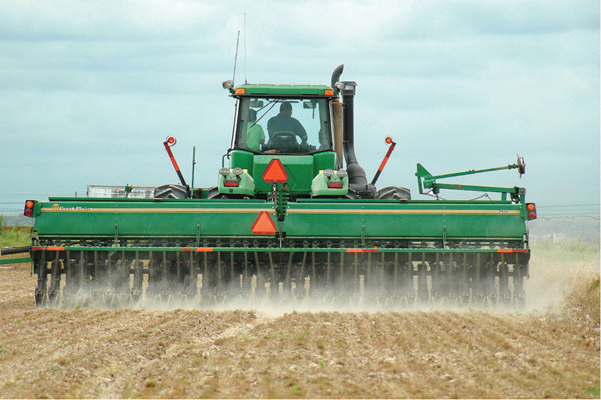 Clearfield rice allows southwest Louisiana rice farmers to drill-seed their fields, which is a practice better for the environment and less costly than aerial seeding into flooded fields. Before the advent of Clearfield, farmers had to rely on a combination of water-seeding and water management to try to prevent the red rice weed from sprouting.( Photo by Bruce Schultz)

Clearfield rice is grown around the world under exclusive license to BASF. Since 2003, it has brought in more than $20 million to the LSU AgCenter.

Clearfield rice production technology, which was developed by LSU AgCenter scientists, has dramatically changed rice production. It was originally licensed to the American Cyanamid Corporation in 1998. The company was later purchased by BASF, which currently commercializes the technology in a number of rice-producing countries. The technology has returned significant royalty revenues to the AgCenter and should continue to do so for the foreseeable future.

To understand the significance of this technology, it is important to know a little bit about the rice industry. Rice production is an important part of the agricultural picture in the southern United States, especially in the major producing states of Arkansas, Louisiana, Mississippi, Missouri and Texas. The mechanized production of rice began in the 1880s in southwest Louisiana utilizing some of the new agricultural implements invented during this period.

From the beginning of this industry, production was plagued by a weedy relative of commercial rice called red rice, which came in the first seed used by the fledgling industry. Most red rice biotypes are characterized by a red bran layer. Thus, if the grain is harvested and makes it through the milling process, it can cause quality reductions in the milled white rice sample. However, much of the red rice produced in a commercial rice field will never make it through the combine because red rice plants have a propensity to shatter as the seed reaches maturity. In addition, red rice seed has a pronounced dormancy mechanism. Because of the shattering and dormancy traits, once a field is infested with red rice, the seed will remain viable and problematic for many years. Because rice and red rice are so closely related, it has been difficult to develop a conventional rice herbicide that will control red rice without causing significant injury to the commercial rice crop. However, research conducted at the Rice Research Station in Crowley eventually led to the development of Clearfield rice production technology, which has allowed for the control of red rice in commercial rice production.

Because it was not feasible to develop a rice herbicide to control red rice without harming the commercial rice, the idea was to develop a new type of rice plant that would be genetically resistant to a herbicide that would control red rice. This was accomplished by a process known as induced mutation breeding, where a large number of seed is subjected to an agent that causes a high level of mutations or changes to the genetic makeup of the seed. The agent used was a chemical called ethyl methane sulphonate (EMS). After treatment with EMS, the seed were planted, and the resulting plants were sprayed with imazethapyr, a BASF herbicide known to effectively control red rice as well as conventional rice.

After 12 years of repeating this process with billions of rice seed, success was finally achieved when a lone plant survived the imazethapyr treatment. This single plant, along with several more resistant plants developed in a similar manner a few years later, allowed for the development of the Clearfield rice technology. It was finally possible to kill red rice without destroying the commercial rice crop. This then allowed, through conventional rice breeding, the development of new varieties that would be high-yielding and have the superior traits needed by the rice industry, while at the same time being resistant to imazethapyr and to a related BASF herbicide called imazamox, which is also used with the technology.

The technology was first used on a limited acreage in 2002. This acreage has steadily grown through the years, and in 2012, Clearfield rice was grown on more than 60 percent of the rice acreage in the southern United States. This includes varieties developed by the LSU AgCenter, the University of Arkansas and the Mississippi State University breeding programs, as well as hybrids developed by RiceTec, a private ricebreeding company. The AgCenter receives a royalty for the resistance gene regardless of which breeding program develops the variety or hybrid. However, if the variety has been developed by the AgCenter, the royalty rate increases.

The Clearfield technology has allowed a dramatic improvement in the rice producer’s ability to control red rice. Imazethapyr and imazamox also provide excellent control of many other problematic weeds in rice production. In addition to weed control, the Clearfield technology has changed the production systems used in rice farming. Before Clearfield rice, the only approach to minimize red rice on severely infested fields was a combination of water seeding and water management that prevented red rice seed from germinating. Water in soil keeps oxygen away from the seed and prevents germination. A typical system involved flooding a rice field in the early spring and then working the field in the water to destroy any red rice seedlings present. After this operation, pre-germinated seed was flown over the field. Shortly after seeding, the field was drained briefly to encourage rice seed root penetration into the soil. The trick was to leave the field drained long enough for the root to anchor but not so long that the soil cracks and oxygen finds its way to the red rice seed below the soil surface. This system only suppressed red rice, and its success was dependent on weather conditions and pumping capabilities that would allow a field to be quickly reflooded. Another major problem with this system was when fields were drained after seeding, the water leaving the field contained a high sediment load from the water tillage operation. This led to soil erosion and water quality problems in receiving streams.

The advent of the Clearfield technology meant these fields would no longer have to be worked in the water and could now be dry-seeded, in many cases using no-till or minimum-till techniques. So, in addition to improving weed control, Clearfield technology has greatly reduced soil erosion and improved water quality and overall environmental stewardship.

This technology has been rapidly adopted across the southern United States and has led to high-yielding, higher-quality rice. The reduction of red rice has also greatly benefited the milling industry, as well as consumers and other end users. In addition, Clearfield rice is also being grown today in a number of other rice-producing countries. While this research has become a very important intellectual property for the AgCenter, it also has led to dramatic improvements in productivity and environmental stewardship in rice production.

Steve Linscombe is American Cyanamid Professor for Excellence in Plant Genetics/Breeding/Biotechnology and rice breeder at the Rice Research Station. He is also the director of the Southwest Region for the LSU AgCenter.