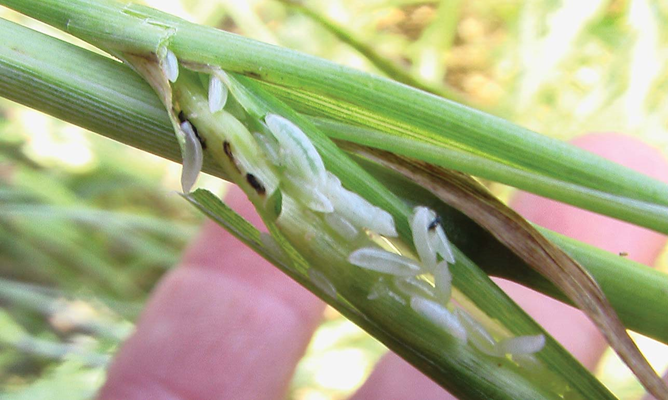 Larvae of Hessian fly usually feed on stems at the joints under the leafsheath, preventing leaf growth and nutrient movement. (Photo by Fangneng Huang) 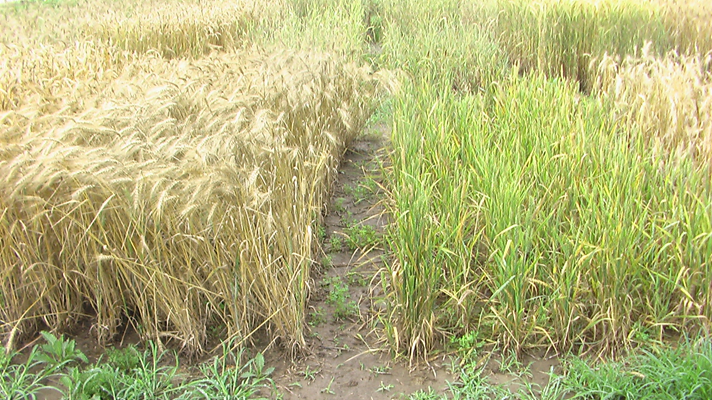 The wheat on the left is a variety resistant to the Hessian fly, while the variety on the right is susceptible. This is wheat during the ripening stage at the Maringouin test location. (Photo by Fangneng Huang) 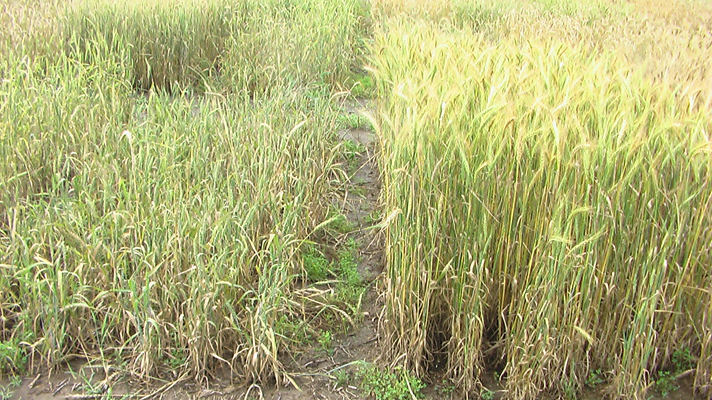 The wheat variety on the left is suseptible to the Hessian fly, while the variety on the right is resistant. This is wheat during the ripening stage at the Maringouin test location. (Photo by Fangneng Huang)

An Emerging Wheat Pest in Louisiana

Hessian fly is one of the most destructive pests of wheat worldwide. This pest was first detected in the United States on Long Island, N.Y., in 1778, and is thought to have been introduced to this country by the Hessian soldiers during the Revolutionary War. Hessian fly may feed on rye, barley and wild grasses, but wheat is the preferred host. The larvae usually feed on the stem at the joints under the leaf sheath (See photo), which prevents elongation and nutrient transportation. Stunted stems may lead to plants breaking or lodging, reduced grain fill and even death, especially in early plant growth stages. The number of generations of Hessian fly per year in Louisiana is unknown, but four to six generations may occur each year in the southern United States.

Hessian fly occasionally has been observed in Louisiana wheat fields but has not been a yield-limiting problem until recently. Wheat is planted in fall and harvested the following spring. During the 2007-2008 crop season, Hessian fly seriously damaged wheat in many fields across Louisiana. Yield losses were estimated to be 60-80 percent in some south Louisiana fields. Planting Hessian fly resistant wheat varieties appears to be the most effective strategy for managing this pest.

Hessian fly was not a significant problem in Louisiana before 2007; therefore, research evaluating management strategies is limited. Hessian fly resistance historically has not been considered an important factor when Louisiana producers select wheat varieties.

LSU AgCenter scientists conducted field trials to clarify the occurrence and damage of Hessian fly on wheat and to provide information on genetic resistance to local Hessian fly populations. To do this, 26 wheat varieties were selected from the LSU AgCenter wheat performance trials and evaluated for the presence of and injury by Hessian fly at two locations during the 2008-2009 crop season. For details, see the Hessian fly table.

Location one was a wheat field at the LSU AgCenter Macon Ridge Research Station near Winnsboro, La. This field was managed to maximize over-summering of Hessian fly populations. Location two was a producer’s field near Maringouin, La. Many wheat fields in this area were severely damaged by Hessian fly during the 2007-2008 crop season. Natural Hessian fly populations in both trials were high, and susceptible wheat varieties were damaged heavily during spring 2009, particularly in the trial near Maringouin. See the photos.

Overall, grain yield was higher in the Winnsboro trial than in the Maringouin trial. Yield was negatively correlated to the relative Hessian fly populations in both locations, especially during the early growth stages. Yield of the seven varieties with the highest yields in Winnsboro ranged from 71 to 74.9 bushels per acre, while the seven varieties with the lowest yields ranged from 41.1 to 56.5 bushels per acre.

The results of these trials demonstrate that high yielding and Hessian fly resistant varieties are available in Louisiana. Additional wheat varieties are being evaluated, and LSU AgCenter scientists are conducting field trials to evaluate seed treatments and foliar-applied insecticides. Data from these studies will be used to develop effective strategies for Hessian fly management.

(This article was published in the winter 2011 issue of Louisiana Agriculture Magazine.)