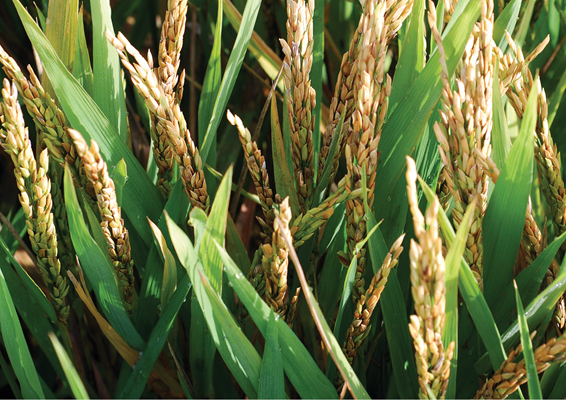 Rice yield reductions caused by panicle blighting have long been a sporadic and chronic problem in the southern United States including Louisiana, Arkansas, Texas and Mississippi. Cause of panicle blighting remained unknown for a long time, and abiotic stresses, such as high temperatures, were considered as the major factors associated with panicle blighting. In 1996-97, LSU AgCenter research revealed that panicle blight of rice is caused by two bacterial plant pathogens, Burkholderia glumae and Burkholderia gladioli. These two bacterial pathogens were first reported in Japan as the causal agents of grain rot and seedling blight of rice. In general, B. glumae is more frequently isolated in infested rice fields and more virulent than B. gladioli. After the etiology of panicle blight was elucidated, “bacterial panicle blight” was selected as the new name of the disease because the term panicle blight had been used in the United States for more than 50 years.

Symptoms of bacterial panicle blight include seedling blighting and sheath rot in addition to panicle blighting, which accounts for most of the damage from this disease. Affected panicles have blighted florets, which initially show white or light gray on the basal third with a dark-brown margin and eventually become straw-colored. The florets then turn dark with growth of fungi or bacteria on the surface. Extensive occurrence of upright panicles because of the failure of grain-filling and seed development is a typical phenomenon observed in a severely infested field. Prolonged high temperature during the growing season is an important environmental condition that promotes the development of bacterial panicle blight. Severe epidemics of this disease, which caused up to 40 percent yield losses in some fields, occurred during the 1995, 1996, 1998 1998, 2000 and, most recently, 2010 growing seasons, when record-high night temperatures were experienced. Suspected global warming could make bacterial panicle blight a greater threat to rice production in the future. Indeed, occurrence of bacterial panicle blight is increasing not only in the southern United States but in other rice-growing countries of Central and South America and Asia.

The disease cycle of bacterial panicle blight is not fully understood in spite of the economic importance of the disease. The bacterial pathogens are considered to be seed-borne, but they also survive in the soil. After germination of the seed, the bacteria appear to survive on the leaves and sheath and spread upward as the plant grows. Their infection to rice panicles occurs at flowering, if the bacterial population reaches to a threshold level and environmental condition is favorable. They may also be disseminated from severely diseased panicles to neighboring healthy plants, according to the observed spatial distribution patterns of the disease in infested rice fields. However, it is not clear if long-distance dissemination can occur via insect transmission.

Unfortunately, there are few effective control measures for this disease so far. Less nitrogen fertilization reduces disease severity but has not been successful. High temperatures at the vulnerable period can be avoided by early planting, but this cultural practice would become useless if hot weather comes early in the growing season. No pesticides are currently recommended or allowed for controlling this disease in the United States. Copper compounds are weakly effective but sometimes toxic to the plant. Oxolinic acid (brand name Starner) is useful for seed treatment, and its foliar spray is effective on moderately infected plants, but this chemical is not commercially available in the United States. Use of oxolinic acid can also be limited by the natural occurrence of antibiotic-resistant pathogen strains. Cultivating disease-resistant varieties would be a cost-effective and environmentally friendly way to control bacterial panicle blight. However, rice varieties completely resistant to bacterial panicle blight are not available. Instead, several varieties and lines including Jupiter and LM-1 have reasonably high levels of partial resistance.

(This article was published in the summer 2011 issue of Louisiana Agriculture magazine.)