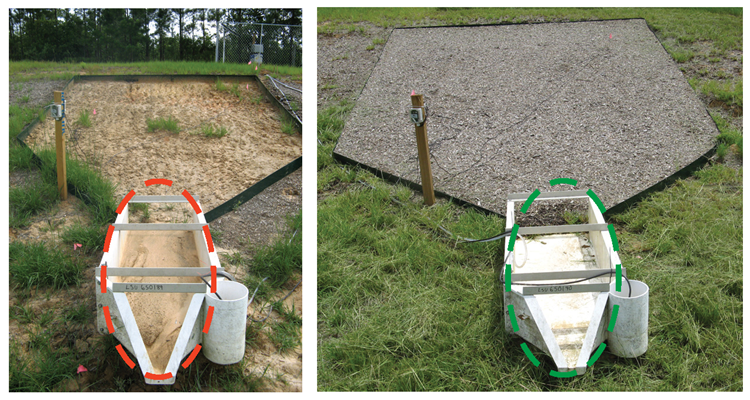 Sediment generated by control plots with no compost/mulch (left) and 4 inches of compost/mulch application (right) in test plots along I-49 in Rapides Parish. (Photo by David C. Weindorf) 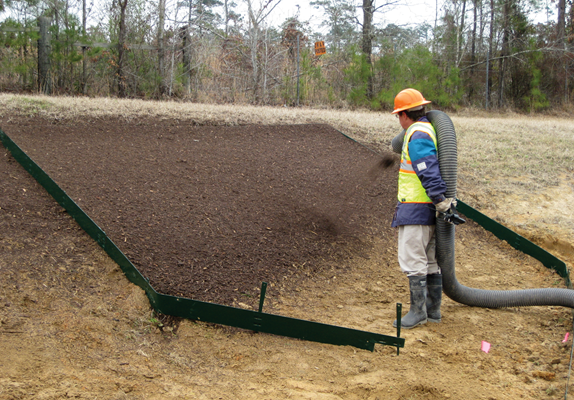 Compost/mulch application to test plots along I-49 via blower truck in Rapides Parish. (Photo by David C. Weindorf) 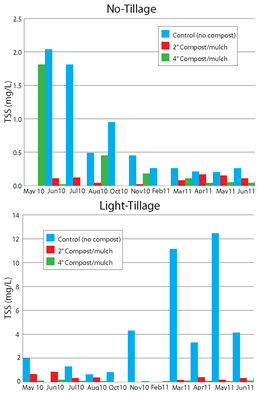 Figure 1. Total suspended solids of different compost/mulch treatments using no-tillage versus light-tillage applications in central Louisiana. Months with no data indicate there was not enough precipitation to generate runoff. 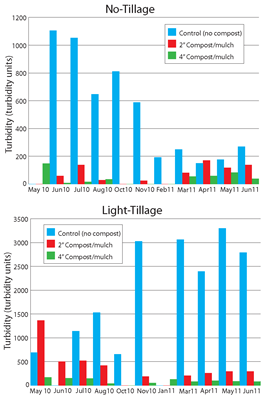 Figure 2. Turbidity results of different compost/mulch treatments using no-tillage versus light-tillage applications in central Louisiana. Months with no data indicate there was not enough precipitation to generate runoff.

Runoff from highway rights-of-way can be difficult to manage. Following extended rainfall duration and short periods of high intensity rainfall water, seepage on sloping soils commences and becomes the dominant mechanism that initiates runoff and erosion. As seepage on sloping surfaces increases in velocity, its kinetic energy compounds its erosive power, and the runoff is capable of carrying soil particles off-site as suspended sediment. The Louisiana Department of Environmental Quality (DEQ) has cited many instances where suspended sediments have caused reductions in surface water quality. These suspended sediments are due in many cases to unabated erosion of exposed soils in construction areas and failed erosion control measures.

Combatting soil erosion on highway rights-of-way requires novel, multidisciplinary approaches that evaluate the issue from vegetative, soil and engineering standpoints. Recent studies by the Texas Department of Transportation and the Texas Transportation Institute have shown that the use of compost/mulch can provide superior conditions for vegetative establishment and longevity in highway rights-of-way while minimizing erosion. The idea is relatively simple: instead of burning trees as highway construction proceeds, those trees are ground into a mulch material and mixed with organic-rich compost. The compost/mulch mixture is placed onto highway rights-of-way with a large blower truck. Grass seed mixtures can easily be added to the mix. Compost is known to provide a substantive nutrient stream to newly emergent vegetation, while the larger mulch particles settle and interlock to arrest erosion. The compost/mulch blanket absorbs the kinetic energy of falling raindrops, energy which would cause soil particle detachment in otherwise exposed soils. Furthermore, the compost/mulch blanket slows water movement across the surface, again limiting the erosive power of the water. Compost is also known to facilitate additional moisture retention, which would benefit vegetative vigor in hot, dry summer months.

Evaluation of this technique in Louisiana was initiated in early 2010 with the establishment of several test plots along Interstate 49 in Rapides Parish and Highway 61 in West Feliciana Parish. Researchers at the LSU AgCenter, Louisiana Department of Transportation and Development (DOTD) and DEQ worked collaboratively to establish test plots in new construction areas and established rights-of-way where active erosion was present. Plots were bounded with steel edging and subjected to three conditions: control (no compost/mulch), 2-inch compost/mulch and 4-inch compost/mulch. Other variables included surface application versus incorporation via tillage, variable slopes and variable soil textures. The steel-edged plots led into H-flumes for collection of runoff. Evaluated parameters included turbidity, total suspended solids, pH, salinity and elemental data. Soil moisture and temperature sensors were placed in each plot to monitor soil condi tions continuously. Rainfall was documented via tipping bucket rain gauges.

Results from the no-tillage control plot produced the highest temperatures in the summer months and lowest temperatures in the winter months as a result of no surface coverage in that plot and exposure to direct sunlight. In the winter months, the application of 2 inches or 4 inches of compost/mulch helped to keep soil temperatures warmer than control plots. These results were expected because the high heat capacity and low thermal conductivities of the mulch, when compared to mineral soils, result in warmer winters and cooler summers and less overall temperature fluctuations near the soil surface over time. However, the most dramatic benefit of compost/mulch to soil temperature/moisture was the substantially higher moisture contents afforded to compost/mulch plots as compared to the control plots. Because of the unique physical properties of the mulch material, increased water retention along with decreased surface evaporation depends on the thickness of the applied mulch layer. This additional moisture is extremely important in hot summer months because additional moisture will help to sustain newly establishing vegetation. In drought years where consecutive weeks of no rainfall can lead to emergent seedling mortality, the additional soil moisture retained via compost/mulch application can literally mean the difference between vegetative life and death.

The use of compost/mulch in highway right-of-way rehabilitation fosters numerous benefits, including reductions in total suspended solids, reductions in runoff turbidity, moderated soil temperatures and additional soil moisture retention. The project is scheduled to conclude in 2012 with the construction of two demonstration plots at highway rest stops in northern and southern Louisiana. A specification for the use of compost/mulch for highway right-of-way stabilization and revegetation is being developed for use by DOTD. Its adoption and widespread implementation in the state will foster improvements in surface water quality and highway slope stability that will be realized for years to come.