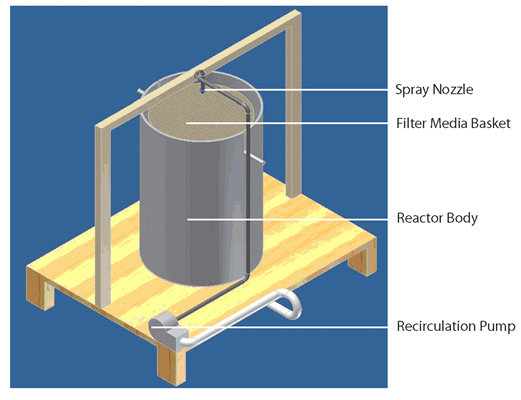 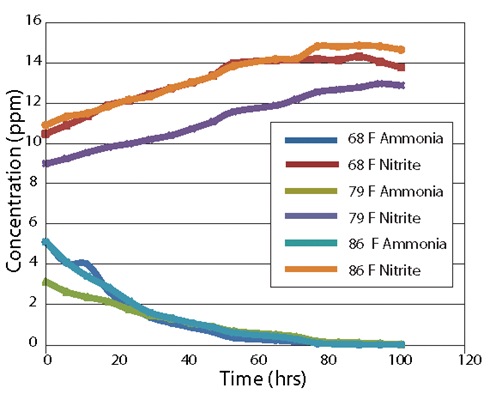 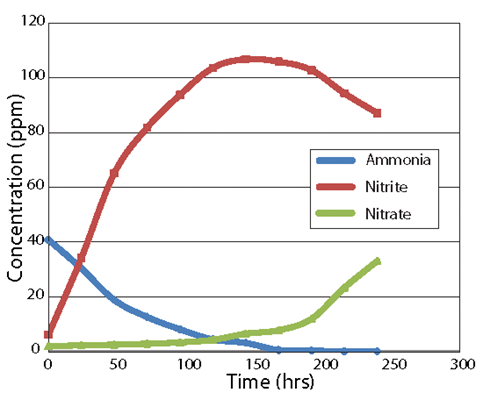 Aquaculture is a nearly half-billion dollar per year industry in Louisiana. Many aquaculture systems include water filtration to protect fish and maintain water quality, enhancing productivity and the environment. Biological filters are effective in using natural bacteria to remove ammonia from aquatic systems such as aquaculture or waste management systems. These bacteria must grow on some medium, which could include microbeads, floating or sinking beads, sand or other materials. This study investigated the use of rice hulls as an organic medium for this purpose and found them to be effective in this task.

For these experiments, rice hulls used as the growth medium had a specific surface area of around 1,130 square feet per cubic foot. The shape of rice hulls is also ideally suited for bacterial growth. Rice hulls also have relatively low carbon content, 40 percent by dry weight; they do not rot easily and thus remain effective in the biofilter for long periods.

Rice hulls are readily available in bulk as a byproduct of rice farming. All of these factors combined make them a suitable biological filter growth medium. The overall research goal was to investigate the efficacy of using rice hulls as an organic nitrification medium in biological filters. Specific objectives were to evaluate:

The reactors were constructed using 20-inch sections of a 14-inch-diameter PVC pipe. The bottoms of the reactors were sealed with sections of ¼-inch-thick PVC sheet, with holes drilled in the center to allow for connection to the recirculating pumps. Each reactor held five gallons of wastewater.

The filter media baskets were constructed using 3-inch- long sections of 12-inch-diameter PVC pipe with a threaded rod inserted through the center of the basket to allow it to be rotated to prevent clogging. It was essential to provide unimpeded flow through the medium to ensure the most efficient and effective nitrification possible. On each side of the basket, wire mesh prevented rice hulls from leaving the basket, which hung 3 inches above the surface of the wastewater.

Recirculation pumps were connected to the reactor spaces at the bottom and pumped the wastewater up above the filter media baskets. The pumps had a pumping capacity of 190 gallons per hour, resulting in a recirculation time of about three minutes. The wastewater was pumped through nozzles with a spray diameter of approximately 12 inches. To provide an even and equal distribution of water across the top of the filter medium, the inlet water was forced through spinner nozzles.

Two solutions tested were synthetic wastewater with a concentration of ammonia of 50 milligrams per liter. The third material was from a dairy parlor.

The second lab-scale tests also used the synthetic wastewater. Samples were taken every 12 hours for a 10-day period after initial filling. The samples were stored in a freezer until they could be tested.

The final lab-scale tests used dairy wastewater that had undergone a phosphorus treatment. Samples were taken every day for 10 days and stored in a freezer.

All samples were tested using the same procedure.

In the 10-day lab-scale test, initial ammonia concentrations were lower than projected but were closer to the target goal of 50 milligrams per liter than the five-day synthetic wastewater test. Ammonia oxidation began at the beginning of the experiment and continued until the seventh day, when ammonia levels became too low to detect. In the 10-day dairy parlor wastewater experiment, the initial ammonia values ranged from 39.43 parts per million to 42.54 parts per million. Figure 3 displays the graph of the ammonia, nitrite and nitrate concentrations recorded during the course of the 10-day lab-scale test using phosphorus-treatment effluent.

Complete oxidization of ammonia into nitrate did not occur in the time frames examined during this study. However, the purpose of oxidizing ammonia into nitrite was to convert the ammonia into a stable form of nitrogen that would not volatize and be lost from the wastewater to the atmosphere. Typically, high concentrations in nitrite may mean that the bacterial population is no longer alive and that the filter is on the verge of failure. But in this instance, the presence of high nitrite concentrations immediately after ammonia concentrations dropped indicates that a partially mature biofilm was present in the filters.

The inoculation techniques of the rice hulls prior to experimentation offer an explanation to why mature biofilms had not d of achieving a mature biofilm. Because nitrite oxidation did occur at the end of the both of the 10-day lab-scale tests, it is evidence that a mature biofilm was beginning to develop. Had the experiments continued, a fully matured biofilm would have eventually developed, causing both the ammonia and nitrite levels to decrease to near zero and the nitrate levels to increase.

The trickling biological filter did not fail or clog due to fouling over the duration of the entire study. This demonstrates that trickling filters can be used for wastewater treatment processes that exhibit high ammonia concentrations once the organic solids are removed. Rice hulls were found to be a viable biological filter growth medium. The availability and durability of rice hulls make them a cheap, long lasting filter medium, while their shape, large surface area and resistance to bacterial degradation make them an effective bacterial growth medium.

Collectively, trickling biological filters that use rice hulls as a bacterial growth medium can effectively oxidize ammonia into a stable form, inhibiting volatilization and conserving nitrogen. Once the nitrogen is conserved into a stable form that will not off-gas into the atmosphere, land application can be more effective and efficient in terms of crop utilization and needs. The results achieved in both the 10-day synthetic wastewater and the 10-day dairy parlor wastewater tests are favorable for continuing the research with a pilot-scale field evaluation of a hanging-basket, trickling filter.

Rice hulls may be useful for farmers and aquaculturists alike as a medium for biological filters.