Precipitation Patterns Over the Bayou State 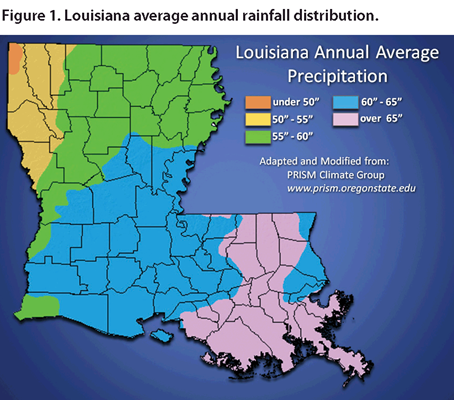 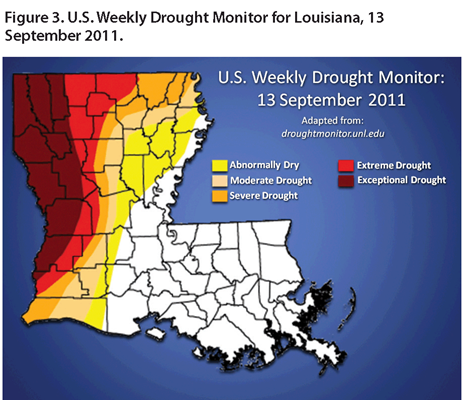 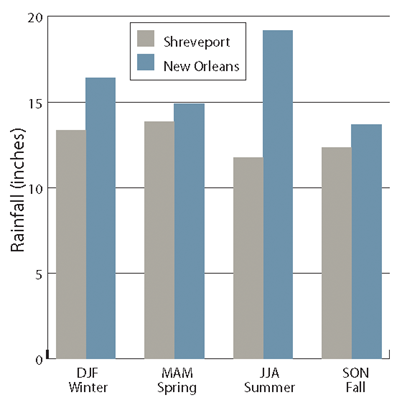 With an annual statewide-average rainfall of approximately 60 inches per year, only Hawaii receives more rain on an average statewide basis. Louisiana’s proximity to the Gulf of Mexico is the primary source for the state’s rains and makes her just slightly wetter than her central Gulf Coast sisters, Mississippi and Alabama – and notably wetter than Florida.

A review of Louisiana’s statewide-average rainfall dating back to the 1890s shows a number of interesting trends and patterns. Probably the most interesting feature of Louisiana’s rainfall history is the large variability in annual totals, with statewide annual rains ranging from less than 40 inches to more than 80 inches over the past 120 years. Year-to-year differences of 10 inches or more are common throughout the record, with more than a dozen occurrences when back-to- back yearly rains differed by more than 20 inches (roughly one-third of the average annual total)! Even for a state where rainfall is normally in generous supply, such year-to-year variability can be a challenge for planning and management purposes and can play havoc with the natural environment.

Over the course of the state’s annual rainfall series, there has been a modest increase of roughly 10 percent in statewide rainfall, which is a signal of climate change for the Bayou State. The long-term increasing trend is partly the result of an unusually high occurrence of dry years (by Louisiana standards) at the be   ginning of the series (roughly 1895-1920) and a more recent run of wetter years (roughly 1980-1997). Note, however, that after the nearly two-decade run of wet years near the end of the 20th century, many of the recent years have swung back to being drier than the long-term average.

The period from the 1920s into the 1940s was significantly wetter than the previous decades for Louisiana, while the decades of the 1950s and 1960s saw a modest decline in annual totals. Then the state experienced another upswing in rainfall. Indeed, the decades of the 1980s and 1990s are among the wettest decades of the entire time series. But the most recent years, beginning with the mega-drought of 1998-2000, have tended to be on the dry side.

Even as a wet state, annual average rainfall for Louisiana displays a rather marked gradient, ranging from more than 70 inches per year, on average, over sections of the Florida Parishes to less than 50 inches in the state’s northwestern corner (Figure 1). Few states have such a wide range in mean annual totals, and those that do are typically much larger, mountainous states where orographics orographics enhance local or regional rainfall variability.

Many assume that Louisiana’s north-to-south rainfall gradient is a result of the impact of tropical systems on the coastal parishes. Without doubt, Louisiana is one of the nation’s hot spots for tropical weather, with impacts by roughly 100 tropical systems (tropical storms and hurricanes) over the past 150 years. While tropical systems undoubtedly have a greater influence on the southern half of the state, the decreasing gradient of annual rainfall is largely a product of the summer season "sea breeze" showers, those bands of rains that drift inland from the Gulf but tend to "rain themselves out" before reaching the northern half of the state.

Figure 2 shows the average seasonal rainfall for Shreveport and New Orleans. Note that average rainfall is greater in New Orleans for all seasons, but the largest difference by far occurs during the summer, when New Orleans’ rains average more than 7 inches above those for Shreveport.

For much of the year, average rainfall across the state is sufficient to meet local evapotranspiration (ET) and environmental moisture demands. But in the heat of the summer, ET typically outpaces rainfall for the northern parishes, whereas rains across the southern parishes are often sufficient to meet most or all of the regional moisture demands. Undoubtedly, it is this warm-season rainfall gradient that defines many of the differences encountered across the state in terms of natural vegetation and agricultural practices (including irrigation).

When Mother Nature is behaving, Louisiana rains maintain our luscious green landscapes and forests, supply copious runoff for our wetlands, and keep many a farmer, forester and cattle producer happy. But being wet has its price. When we get too much of a good thing, flooding follows. Louisiana’s blessing is occasionally a curse in disguise because the Pelican State ranks among the top states in the nation when it comes to per-capita flood losses, and that excludes losses attributed to Katrina, Rita and the many additional tropical impacts. In fact, while tropical weather can produce enormous amounts of surge and flood damage, the vast majority of flood events in Louisiana come during the winter and spring seasons, when rainfall can far exceed evapotranspiration rates and the environment’s water-holding capacities.

At the other extreme, and often more difficult to manage, is the drought threat. With floods, you see them coming. They can be measured with rain and river gauges. In most cases, they can be quickly assessed in terms of their economic impacts. Most floods can be viewed as meteorological events, prompted by relatively short-term weather anomalies.

Drought, on the other hand, is more insidious. It slowly evolves and can be difficult to quantify, especially in the early stages. Drought sometimes requir requires months of deficient rainfall before any effects become apparent. What makes drought an even more difficult problem is that it is often sector-specific. What is a drought for a sugarcane or rice farmer may be fine weather for other types of agricultural activities. In addition, as was so evident during 2011, drought severity can vary considerably over relatively small distances.

Louisiana’s drought status at the end of the 2011 summer serves as a prime example: the U.S. Weekly Drought Monitor shows a dramatic drought gradient across Louisiana (Figure 3), reflecting the uncommon and critical nature of rain and soil-moisture shortages over many western parishes during much of 2011. Yet nearly half of the state was essentially drought-free during the late summer and early fall of 2011, thanks in a large part to July rains and a tropical storm named Lee.

Louisiana’s mid-September 2011 drought status is an excellent reminder that even a relatively small state can experience periods of drastic environmental differences simply as a function of spatial and temporal difference in local and regional rainfall. The bottom line: Substantial variability in annual, seasonal and spatial rainfall is readily evident in the Bayou State’s climatic record.

And given the added uncertainties introduced to the state’s future in the face of climate change theory, the importance of forestry and agriculture in the state’s economy, and the invaluable resources of our coastal wetlands, Louisiana would greatly benefit from an active and fully-integrated statewide climate-monitoring program. A successful weather- and climate-monitoring program would incorporate the resources of the wide variety of data-gathering networks within the state and provide a convenient interface for access to these data. But data delivery is only one part of a comprehensive climate-monitoring program. Data-driven, user-friendly tools – tools defined by the user community – would be available through a Web-based interface to provide enhanced, value-added decision-making applications for farmers, researchers and resource managers. In Louisiana, the AgCenter’s LAIS (Louisiana Agriclimatic Information System) and the LSU Southern Regional Climate Center have made great strides in this direction, but so much more remains to be done.