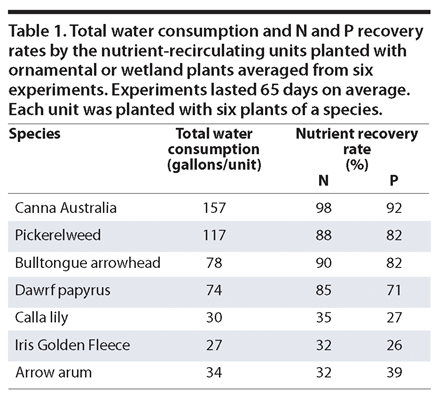 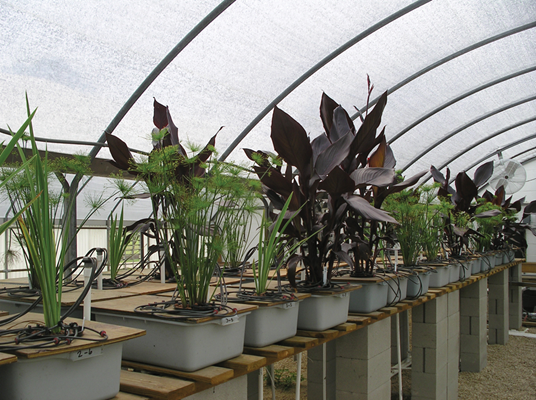 Ornamental canna Australia and dwarf papyrus being evaluated for the ability to remove excess nutrients from stormwater in a nutrient-recirculating research system. (Photo by Yan Chen) 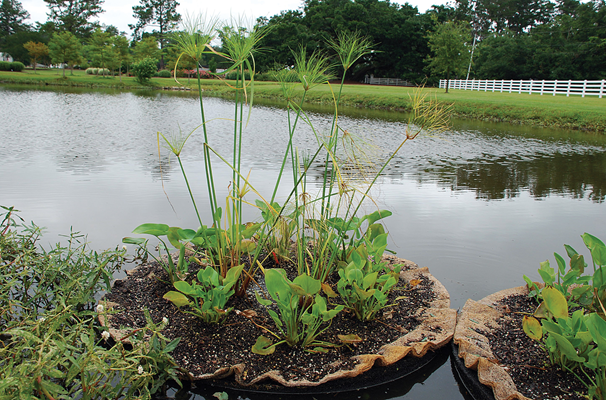 Planted floating islands set out in a retention pond at the Hammond Research Station. (Photo by Yan Chen)

Population growth and urbanization over the last century have raised concerns about stormwater runoff and the environmental impact of the pollutants it may carry, such as fertilizer from home lawns and recreational turf areas. Studies on impaired Mississippi River watersheds have found excess nutrients, such as nitrate–nitrogen and soluble reactive phosphorus, in stormwater runoff from urban areas. These pollutants degrade water quality and contribute to algal blooms and fish kills in downstream reservoirs.

In Louisiana, permits and other authorizations issued by local, state and federal agencies regulate stormwater runoff. Ordinances and rules established by local municipalities provide additional guidance for stormwater management. A variety of treatment technologies, such as constructed wetlands, swales or retention ponds, are being implemented. To meet increasingly rigorous federal and state regulations, significant nitrogen and phosphorous reductions are necessary to improve water quality before water is discharged from these retention structures.

A few wetland plants have been recommended for stormwater mitigation based on their role in natural wetlands. However, most of these plants are hard to find at local nurseries. On the other hand, noninvasive ornamental plants that are readily available from the ornamental industry may have similar or even better mitigation ability than native wetland plants.

A nutrient recirculation system was designed and used to assess the ability of ornamental plants to remove nutrients from stormwater runoff. This system comprises refill and reservoir tanks, circulating tubing, growth tubs and covers, and pH and temperature sensors. Treatment solutions mimicking stormwater runoff are circulated within the closed system. Daily water use by the plants can be measured because water loss is only from plant uptake and minor evaporation. Concentrations of nitrate and phosphorus in the solution can also be measured to evaluate the test plants’ abilities to remove nutrients from stormwater. This system compared nutrient-removal abilities of ornamental canna, iris, calla lily and dwarf papyrus with those of the wetland plants arrow arum, pickerelweed and bulltongue arrowhead. In these experiments, the recirculating system was filled with a nutrient solution with total a nitrogen concentration of 11.3 parts per million (milligrams per liter) and a phosphorus concentration of 3.1 parts per million to simulate high levels of nutrient contaminations in stormwater.

Among tested plants, Australia canna had the greatest daily water use, total biomass and total tissue contents of nitrogen and phosphorous. The amount of nutrients canna removed from the system was higher than pickerelweed, a wetland plant often recommended for wastewater treatment. Golden Fleece iris had higher tissue nitrogen concentrations than canna but produced much lower biomass, thus lower total nitrogen removal. The units planted with canna removed 99 percent of the nitrogen and 92 percent of the phosphorus compared with those planted with iris (32 percent nitrogen and 39 percent phosphorus) and arrow arum (32 percent nitrogen and 26 percent phosphorus) (Table 1). Units planted with dwarf papyrus had a similar nutrient recovery rate as pickerelweed, but much less total nitrogen and phosphorus were removed as a result of less water consumption (Table 1).

Based on these results, canna Australia, pickerelweed, arrowhead and dwarf papyrus were selected and planted in floating wetlands (also called floating islands) in the stormwater retention pond at the Hammond Research Station. Results suggest that when ornamental plants are used for water treatment, the benefits can be both aesthetic and environmental. The floating systems increased mitigation capacity and provided efficient nitrogen and phosphorous removal for this small treatment structure.

Ornamental canna are recommended to be used as mitigation plants in urban stormwater treatment areas such as retention ponds, constructed wetlands and vegetated waterways. Canna is a nonin vasive perennial plant adaptive to wide soil and water conditions. It allocates the majority of its biomass to shoots. It can be harvested regularly and offers consistent removal of biomass along with nitrogen and phosphorous from the treatment system.

More research is being planned to evaluate other potential landscape plants, such as ornamental grasses, for stormwater mitigation. The ultimate goal of this research project is to provide landscape designers and municipal planners with a variety of ornamentals that can effectively work as living filters as well as beautify our landscapes.