Nutrient Removal from Atchafalaya during 2011 flood 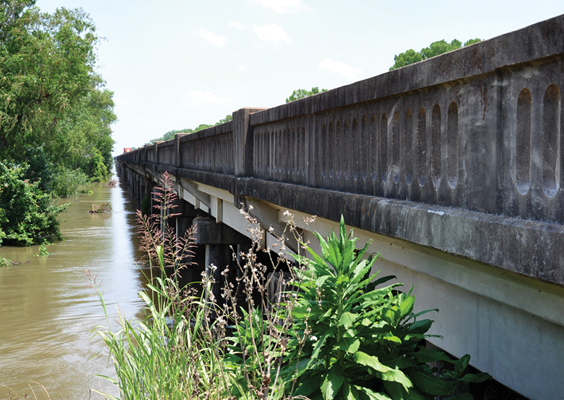 The Morganza Spillway Highway 190 bridge after the spillway opening.(Photos by Y. Jun Xu)

The Morganza Spillway Highway 190 bridge before the spillway opening. 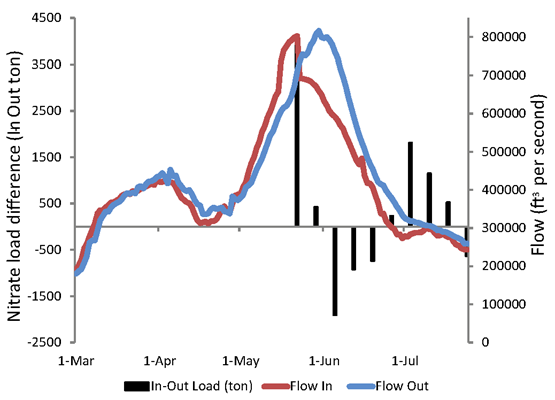 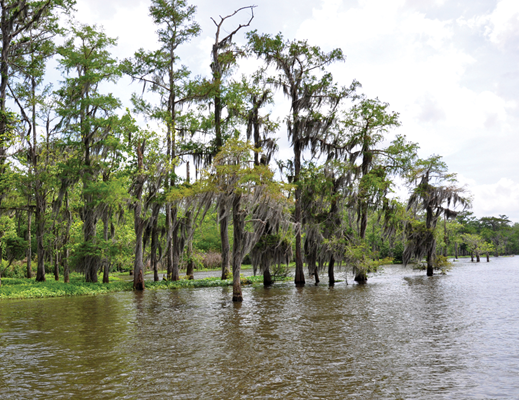 A river corridor and forest wetland in the Atchafalaya Basin.

The Mississippi-Atchafalaya River carries a large quantity of nutrients, making Louisiana’s estuarine and coastal waters highly productive for commercial fisheries. However, excessive riverine nutrients, especially nitrate nitrogen, have caused algal growth and the consequent oxygen depletion in the summer over the past two decades. This condition, also known as hypoxic dead zone, exerts not only long-term ecological impacts, but also economic damage from lost fisheries income.

As the hypoxic dead zone in the northern Gulf of Mexico continues to grow, alternative means to reduce nutrient loads from the Mississippi River to the Gulf are being sought. One of the options is to divert the nutrient-rich water to the river corridor and floodplain wetlands in the lower Mississippi-Atchafalaya River Basin. It is unclear how much nitrate reduction this would cause.

The Mississippi River flood of 2011 required the opening of the Morganza Spillway to divert the flood water into the Atchafalaya River Basin. This event offered a unique opportunity for investigating nitrate transport and retention in this large river swamp basin. During this flood event, LSU AgCenter scientists collected water samples for nitrate analysis at three locations on the Atchafalaya River, using Simmesport as the input and Wax Lake Outlet and Morgan City as the output. In addition, measurements of water temperature and dissolved oxygen were taken at these locations. This data collection design was to quantify mass inflow, outflow and the retention rate of nitrate in the Atchafalaya River Basin during the extreme flood event.

The Atchafalaya River Basin acted as a small sink for nitrate, retaining nearly 4 percent of the nitrate entering the basin during the 2011 flood. Although there were some weeks in early June that the basin released nitrate, nitrate was retained in the basin during the flood recession (Figure 1). Timing of this flood later in the season may have allowed for higher denitrification or permanent removal. Because denitrification is dependent both on lack of oxygen and presence of the required biological community, warmer water favors these conditions in holding less oxygen while being high enough to support a biological community.

Flow paths in the Atchafalaya Basin are not fully understood and are apt to become even more convoluted in large floods. Intensive sampling results show that the flood diverted an extraordinarily large quantity of nitrate to the Atchafalaya River, and that this swamp river basin with high connectivity to its floodplains functioned as a nitrate sink, which is unlike the findings of previous studies. Despite the magnitude of the flood and the potential for the Atchafalaya Basin to reduce nitrate load, only 4 percent of nitrate was retained. Further testing will help determine if the nitrate change is from temporary storage (assimilation) or permanent removal (denitrification), which will be helpful for predicting riverine nitrate transport and transformation in floods of this magnitude.