Influence of Soil Salinity on Sugarcane 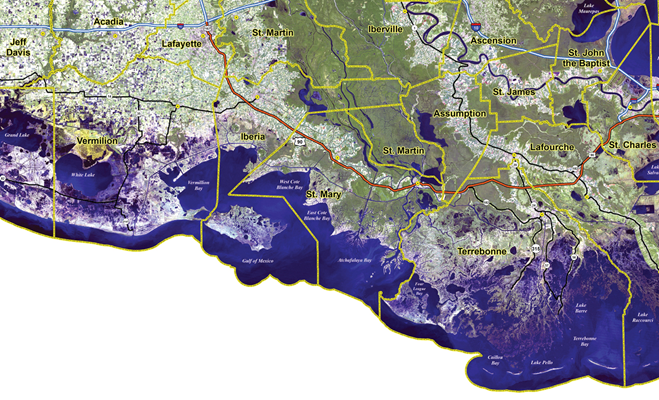 Tidal surges from hurricanes Katrina, Rita, Gustav and Ike deposited enormous amounts of salt in the sugarcane fields of coastal Louisiana in a period of active tropical weather from 2005 to 2008. To gain an appreciation of the effects of salinity on sugarcane production, LSU AgCenter scientists conducted a survey to measure soil salinity levels at sites in the parishes most affected by the storms – Iberia, St. Mary, Terrebonne and Vermilion. An initial survey was accomplished in October 2005 after Katrina and Rita. The survey revealed soil salinity levels ranging from 268 to 4,329 ppm. Published reports suggest sugarcane is moderately sensitive to salt, with the damage threshold for sugarcane estimated to range from approximately 640 to 1,200 ppm of salt in the soil. Several survey sites had salinity above the damage threshold. Because of the enormity of the salinity problem, a decision was made to continuously monitor salinity over time and attempt to associate salinity level with sugarcane yield. A total of 60 single-row, 25-foot-long plots were established along the coast. These geo-referenced sites were sampled for soil salinity at the time of establishment and at harvest of the following crop. Cane yield in tons per acre was estimated from multiplying stalk number times stalk weight, and sugar yield was estimated by multiplying pounds of sugar per ton times tons per acre. No attempt was made to evaluate the direct damage to sugarcane caused by wind, tidal surge or salinity, but only the effects of soil salinity on the performance of the subsequent crop in the production cycle.

By the time plots were harvested in the fall of 2006, rainfall was sufficient to leach much of the salt from the root zone. Averaged over all the plots, salinity decreased by almost two-thirds from the time of the survey to the harvest season. Consequently, cane and sugar yields were generally satisfactory. High salinity remained at a few sites, and it is believed these persistent high levels are due to proximity to salty water subject to tidal movement and a high water table.

Another soil salinity survey was conducted in October 2008 after hurricanes Gustav and Ike. Salinity levels and resultant effects on sugarcane yield were similar to that found for the earlier storms. While observations have been offered concerning the effects of soil salinity on sugarcane yield, the evaluation process was made difficult because the conventional methodology of using unsalted control plots for comparison purposes was not possible. Also, differential rainfall amounts and the direct effects of the flood waters served as confounding effects across the many locations from which data were collected. While the storm surges are not inconsequential, the sugarcane industry should be somewhat comforted in the knowledge that the effects of soil salinity on sugarcane crops produced subsequent to the deposition of salt are generally benign, except in areas where salinity is recalcitrant. For more than 200 years the sugarcane industry has survived the aftermath of countless tropical storms primarily because Louisiana’s high rainfall serves to mitigate the damage to sugarcane caused by soil salinity.