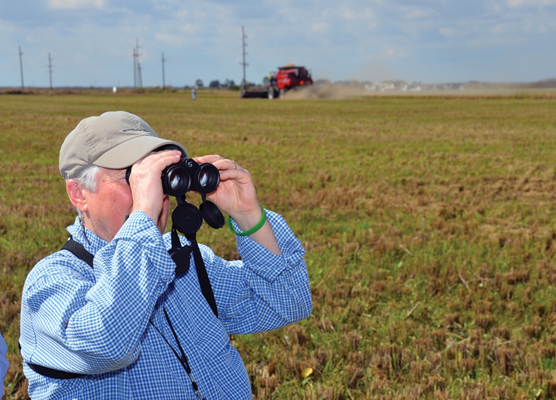 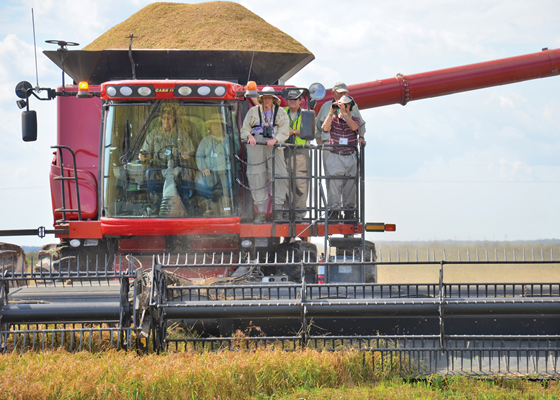 Birdwatchers perched on a combine harvesting rice look for a small bird, the yellow rail, in a field in Jefferson Davis Parish. The bird is rarely seen, but it is often observed flying out of a rice field as the crop is being cut. (Photos by Bruce Schultz)

THORNWELL, La. – Birdwatchers from 23 states and two countries converged on rice fields in Jefferson Davis Parish to get a glimpse of the small, elusive bird called the yellow rail.

The Yellow Rail and Rice Festival, which was Oct. 27-30, drew 123 participants. For many of the birders, the event was their first chance to check another species off their lists.

The birds are easy to spot flying out of rice fields in late October and early November as farmers harvest their second-crop rice. Kevin and Clarence Berken, farming brothers in the Thornwell community, hosted the birdwatchers in their fields and let them ride their combines to see the birds. When a rail was spotted, Berken beeped the horn on his combine to alert the onlookers standing on the field’s edge.

"This is a real treat," said Bob Loomis, of Virginia Beach, Va., who came to the festival with his wife. "We’re having a good time."

Kevin Berken said the visitors also were given bags of rice provided by farmer Jimmy Hoppe and Falcon Rice Mill. Apparently, that gesture made a positive impression. "When I shop, I usually buy Tex-mati rice, but now I’ll be looking for Louisiana rice," Hewlett said. "I like rice better than potatoes."

Keith Hawkins, of Little Rock, Ark., walked alongside the combine to get a close-up view of the birds as they flew out of the rice about to be harvested. Mud was caked on his pants from a misstep, and he wasn’t sure how many rails he had spotted. "Eight or maybe more," he said. "I lost count. That was fantastic."

Bill Vermilion, a member of the Lafayette-based conservation group the Gulf Coast Joint Venture, was working at the festival as a facilitator to help birders.

"Birdwatchers can go all their lives and not see this bird," Vermilion said. "It prefers to run, and it takes something like a combine to make it fly."

Patton said the group included birdwatchers from the casual to the intense, but they all found Louisiana abundant in varying species. "We have a lot of birds here that we take for granted."

This was the festival’s third year. Kevin Berken said the festival began after Patton brought birdwatchers to the area to see the rails four years ago. He said he allowed them to walk his fields, and he offered them a ride on his combine.

Berken said the festival provides the chance for birders to see the beneficial effects of rice farming on wildlife. "You can’t buy air time for a message like that to get out the word that rice farming creates good habitat."

"This just confirms that people from throughout the U.S. are realizing the contribution that rice farming makes toward the wildlife environment," Linscombe said. "Here in Louisiana, we often take this for granted. But particularly in periods of dry weather like we have now, a rice field can be an oasis for bird life."

The event shows how agriculture can be used to draw tourism to the state, said LSU AgCenter agritourism coordinator Dora Ann Hatch.