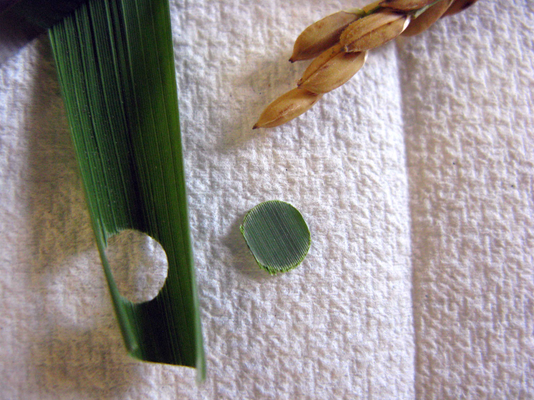 A tiny part of rice leaf (¼-inch diameter) from one plant can provide adequate DNA materials to run more than 100 separate DNA or gene analyses.(Photos by Bruce Schultz)

A PCR reaction mix is placed into a 96-well plate to simultaneously analyze 96 different rice lines in a single reaction. 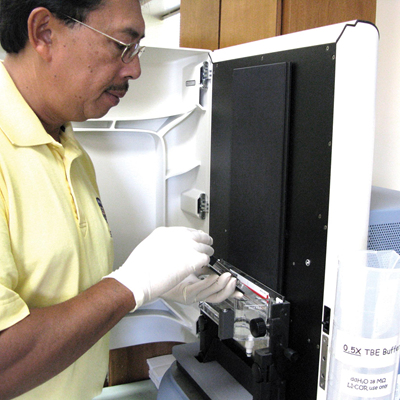 The most important traits to consider when developing new rice varieties are grain yield, milling and grain quality, disease resistance, maturity, resistance to lodging (plants falling over) and seedling vigor. Stability of these traits across different environments and seasons is critical for consistent production.

The capability to manage extensive breeding populations and large-scale yield tests is enhanced by improved research facilities that include precisionleveled research fields, underground irrigation systems and modern planting and harvesting equipment. Standardized multi-location trials aid in the identification of stable, high-performing lines. Weather data and forecasting and timely applications of fertilizer and weed and insect control enhance the ability to maintain plant health and vigor through the growing season. In recent years, more efficient ways to produce new varieties are achieved through better understanding and identification of the functions of individual genes.

The knowledge of a gene’s function and behavior within various environments provides a framework for future variety development. A wealth of information on rice breeding, genetics and molecular biology is accessible around the world. Selection methods, breeding techniques, sophisticated experimental designs and data analyses are important tools for developing new varieties. These tools are valuable in unraveling both simple and complex gene functions and behaviors.

Appropriate experimental designs and statistical analyses provide a way to clarify gene function and interactions, whether between two interrelated genes, among multiple gene families or with the environment. These methods, however, provide only an indirect view of gene functions. Recently available DNA marker technology is a new tool that offers direct examination of gene functions and interactions.

Because DNA is the origin of genetic information, it provides a physical layout to link observed traits directly to specific chromosomal regions. A direct analysis of gene functions can be conducted more precisely and in greater detail than before. Far more descriptive interactions related to various important traits in crop production may be obtained from molecular marker analyses. Thus, DNA markers improve the precision of identifying specific genes and relating them to important traits in crop production, something that previously was difficult and costly. This new tool can be used to further enhance the efficiency and effectiveness of breeding programs.

DNA markers can be used to identify or verify varieties, breeding lines, first-generation hybrids, seed purity or intra-varietal variations based on their unique genetic code. These analyses are easier and more accurate than observational evaluations. A few well-selected markers are typically adequate for providing definitive determinations of varieties, hybrids or red rice (a weedy relative of cultivated rice). Research on molecular markers has contributed to a better understanding of genetic diversity, population structures, genetic relationship among subspecies, genetic relationships within specific seed collections and family relationship among breeding lines and varieties. The information generated can help realize and manage the overall genetic potential for developing improved varieties.

Marker-based scanning can be used in a backcross breeding program to increase the speed of establishing a new gene in desirable varieties more efficiently than through conventional breeding methods. Using the same technique, lines with essentially identical genetic makeups, but which differ in a few selected genes, could be developed with greater precision.

Marker-assisted gene pyramiding has been used successfully to combine multiple genes to provide a broader spectrum of resistance to rice blast and bacterial leaf blight. Because individual genes have unique reactions against specific pathogens, and some of them have overlapping effects, selection based solely on phenotypic disease reactions or symptomology could be problematic. Using molecular markers linked to individual diseaseresistance genes can help overcome this problem and improve selection efficiency for disease-resistant rice varieties.

Various DNA markers are available for use in rice breeding programs. Rice Station researchers use simple sequence repeat (SSR) markers in most markerassisted selection activities. More than 2,240 SSR markers are publicly available. The newest marker type includes Single Nucleotide Polymorphism (SNP), which can focus on a small portion of DNA and more accurately locate specific (and unique) chromosomal regions (genes). It is the most abundant type of marker that can be identified through direct comparison of the genome – or the complete DNA sequence. Because most breeding lines are composed of closely related genotypes, SNP markers are quickly becoming the marker of choice to accurately search for specific genes in a breeding program.

Marker-assisted selection has the potential to expedite the development of new lines through gene pyramiding and introgression. As in other crops, most economically important traits are quantitative in nature and can be attributed to the interactions between two or more genes and their environment. These traits are governed by QTLs (quantitative trait loci), which are regions of DNA often found on different chromosomes. Breeding for quantitative traits has been a slow and inaccurate process because of the potential for multiple genes and their interactions, which frequently vary according to the environment. Marker-assisted selection, as a tool for identifying the presence of multiple genes affecting a single trait, can assist plant breeders. Though not necessarily genes themselves, markers are stretches of DNA closely linked to the genes that underlie the trait in question. QTLs can be molecularly identified to help map regions of the genome that contain genes involved in specifying a trait. This can be an early step in identifying and sequencing these genes. While QTL mapping techniques are currently available, their applicability is still limited. Ongoing research at the Rice Station seeks to improve their direct applicability in large-scale rice breeding programs.

To fully integrate molecular marker technology into variety development programs, it is necessary to customize the information for a specific range of conditions such as locally adapted rice varieties and growing regions. However, this requires tremendous investment and represents the current bottleneck as to why successful use of available mapped QTLs into variety development remains limited.

A potential drawback of traditional QTL mapping studies is that they can take several years before the results can be used. By the time the work is completed, the recurrent parent used in the population development may have been replaced by new (and genetically different) varieties. A promising way to avoid this problem is to integrate commercial plant breeding and genomic technologies through a specific crossing scheme, which could allow the development of marker profiles, QTL mapping and new varieties to be advanced simultaneously.

The genetic diversity of cultivated rice accounts for only 5 percent of the overall diversity found in the rice genus. This wealth of genetic resources could provide a valuable genetic pool that can be used to boost the yield potential beyond current productivity levels through the introduction of rice genes from noncultivated germplasm. The diversity in wild species offers novel alleles – gene forms – not present among cultivated species. These genetic resources can be used to rediscover critical alleles hidden or lost during the early domestication process and along the progression of modern breeding processes.

Some of these exotic rice germplasm resources appear to have many new yield-related QTLs that can potentially be used to improve cultivated rice. A project such as this is best-suited for molecular marker and QTL technologies because traditional breeding methods would require tremendous expenditures of time, money and labor resources.

Genome sequencing of wild species and map alignment at international levels could provide a roadmap to unravel the potential of wild rice species. The idea of unlocking wild genetic variation to improve global grain production has gained renewed interest. DNA markers can be the tools to rediscovering valuable alleles and channeling them into the pipeline of variety development programs.

(This article was published in the winter 2010 issue of Louisiana Agriculture.)