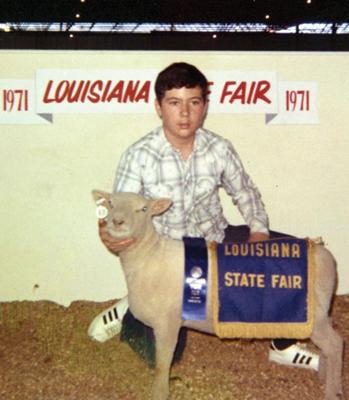 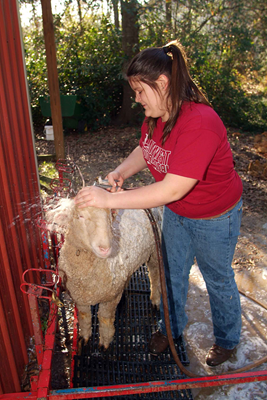 Karen Robbins, 16, takes care of her sheep for her 4-H livestock project.(Photo by John Wozniak) 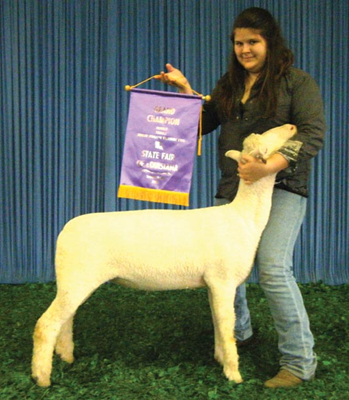 Louisiana 4-H alumnus Kermit Coulon had never been farther than Alexandria – 30 miles from his home in Hessmer – before attending his first state livestock show in 1942 at the Parker Coliseum in Baton Rouge. Because his family had no truck to transport his cow, they hired a driver, who then had to nail makeshift boards around the truck bed to see that Kermit’s cow could make it safely to the event.

“When we came to Parker Coliseum and saw that building, the scope of it, the magnitude of it, we were amazed,” Coulon said. “We slept on the 5th floor of the football stadium for free. That was far better than at district shows, where we slept in the barn with our animals.”

Coulon, later a 4-H agent in St. James Parish, returned home from the state show in 1945 as sort of a local hero after being named the state champion in the Guernsey heifer division. “I was the king of the walk. At the next 4-H meeting, the agent called me up and recognized me. All of the champions were listed in the paper.” Now in her first year as a high school agricultural education teacher, Lafayette native Amber Latoilais was the first in her family to show livestock.

“I was kind of a pioneer in the family,” Latoilais said. After attending a school 4-H meeting, she told her dad she was going to show sheep. “He said, ‘What?’ After seeing I was serious, he said, ‘I guess you’re showing sheep.’ It ended up being one of the best decisions of my life.”

Latoilais made it to the state competition each of the nine years she showed animals, winning in 2004 as the state premier exhibitor for sheep. Her sister and brother followed in her footsteps by also showing livestock.

“My dad took time off work to be with us. It’s awesome because we were able to spend time together as a family that maybe we would not have been able to otherwise,” Latoilais said.

Deputy Commissioner for the Louisiana Department of Agriculture and Forestry, Dr. Brent Robbins, a veterinarian and former livestock show winner with sheep, is grateful for the benefits of showing livestock.

“I can’t brag enough on these kids and their level of responsibility. My daughter is up at 5 in the morning taking care of her sheep. And every evening she is feeding them and giving them fresh water,” Dr. Robbins said.

He remembers spending hours alongside his father – hand-shearing, blocking and carding sheep. “We were able to talk about things.”

Because of her involvement with the livestock project, Latoilais started her own sheep shearing business to save money for college. That money covered her textbook costs to attend the University of Louisiana at Lafayette, where she earned a degree in agricultural education.

“Even if I hadn’t gone into agriculture, all the biology and sciences going through it (raising livestock) would have helped me. I already knew parasites and diseases, kingdoms and scientific names,” Latiolais said.

Many of the participants in the AgCenter Livestock Show have made lifelong friendships that they continue to maintain.

“Families at the livestock shows looked after each other and still do. In the barn, you were a big family and that was special,” Dr. Robbins said.

Latiolais said one highlight of the annual state show was making friends from around the state and then meeting them again. “It’s a livestock reunion thing. We still keep in touch,” she said.

(This article was published in the winter 2010 issue of Louisiana Agriculture.)