External and Internal Parasite Control for Cow-Calf and Stocker Beef 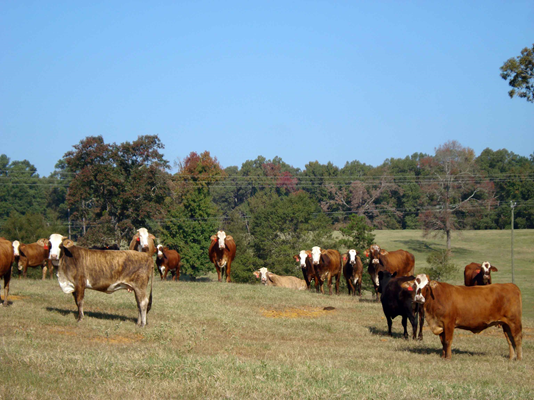 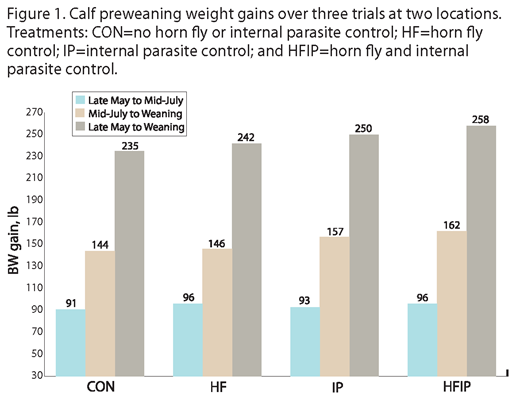 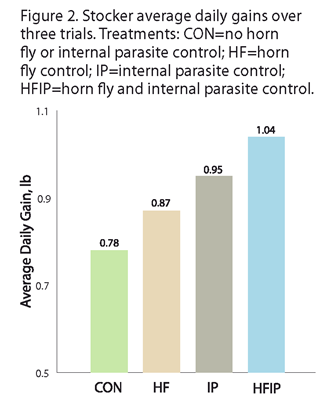 Numerous studies have demonstrated improved productivity and economic benefits of controlling either external or internal parasites in cow-calf herds and in stockers – young animals not yet ready for fattening or breeding. Research is extremely limited, however, on the combined effects of both horn fly and nematode control in beef cattle production.

The horn fly is one of the major blood-sucking external parasites of cattle. Annual economic losses from horn fly infestations in U.S. cattle production have been estimated to be more than $875 million. Horn flies feed up to 20 times a day on cattle, causing stress and annoyance, which may result in reductions of milk production and growth rate. Horn flies can be found year-round in the South; however, peak populations occur in the spring, summer and early fall, which coincides with the preweaning phase of a spring-calving system and stocker grazing of warm-season forages such as Bermuda grass.

Cattle of all ages, but particularly young cattle, are infected by a diversity of internal parasites. Gastrointestinal nematodes (GI), the most common internal parasites affecting cattle, can cause significant production losses in hot and humid regions, including Louisiana. Industry experts estimate $2.5 billion is spent annually on pharmaceutical products by the U.S. cattle industry to control internal parasites.

A study of the effects of horn fly and internal parasite control on cowcalf and stocker production was conducted at the Hill Farm Research Station in Homer and at the Reproductive Biology Center in St. Gabriel. The study produced 668 cow-calf records with three trials conducted at each location. Each of the trials began in late May and concluded between late September and early October when the calves were weaned. Length of the trials ranged from 115 to 124 days.

For the stocker study, three trials were conducted at the Hill Farm. Each trial began in early to mid-May and lasted 84, 98 or 112 days. A total of 168 weaned stockers were used (56 per trial). They were grazed in one of eight 2-acre Coastal and common Bermuda grass pastures. Stockers were pastured together before initiation of each trial. They were then stratified by sex and weight and randomly assigned to eight replicate treatment groups.

For both studies, four treatments were used:

At the initiation of each trial, cows and stockers assigned to the HF and HFIP treatments were fitted with one insecticide-impregnated ear tag. In addition to the ear tags, insecticidal sprays and pour-ons were applied to the treated groups in July, August and September for additional fly control. Each week throughout the trials, estimates of the number of horn flies per side were conducted for randomly selected cows and stockers. All counts were made before 8:30 a.m. with the aid of binoculars.

In late May, mid-July and late August (about 40-45 days apart), calves assigned to IP and HFIP treatments received an oral drench of fenbendazole. Fecal samples were individually collected from all calves and stockers to determine nematode fecal egg counts. Efficacy of deworming was determined by the fecal egg count tests.

Cows, calves and stockers were weighed, and cow body condition scores were determined using a system ranging from 1 (emaciated) to 9 (obese) throughout each trial. Cows were tested to determine pregnancy when their calves were weaned.

The levels of horn fly control at the Hill Farm were marginal for both cows (47 percent) and stockers (48 percent); whereas higher levels (72 percent) of horn fly control were achieved at the Reproductive Biology Center. A probable explanation for this lack of acceptable fly control at the Hill Farm could be because of the development of insecticide resistance by the horn flies. Calf growth performance in response to horn fly control alone resulted in no significant weight gains (Figure 1). Likewise, no significant weight gain advantages appeared for the stockers treated for horn flies alone (Figure 2).

Reductions in fecal egg counts for the treated calves and stockers compared with untreated animals ranged from 95 percent to 100 percent in both studies, indicating that fenbendazole was effective in reducing GI nematode infections. The IP calves compared with CON calves responded with greater weight gains, primarily as result of improved gains from mid-July to weaning (Figure 1). These results suggest that a greater response in calf growth should be expected when calves are dewormed at 4 to 5 months of age rather than 2 to 3 months of age. Results showed no significant weight gain for the stockers treated for GI nematodes alone compared with untreated stockers (Figure 2).

The overall lower rates of stocker gain in our study may have contributed to the lack of significant differences be tween stockers treated and not treated for internal parasites. One explanation for the overall lower rates of gain may be periodic droughty conditions during the trials that resulted in limited forage availability during those times.

Contrary to growth performance, cow reproductive and maternal performances were not influenced in this study. Cows showed no significant treatment effects for any of the response traits – body weight change, body condition score change and pregnancy rate.

Improved weight gains from horn fly and internal parasite control lead to economic incentives to consider. Excluding labor, which for many Louisiana beef producers is their own, the cost of treating for both horn flies and GI nematodes was approximately $4.53 for each cow-calf pair and $6.75 for each stocker. This is far less than the value of additional weight gains that resulted from these treatments. At current prices, investing in the cost for both treatments would result in a better-than-fourfold return for beef producers.