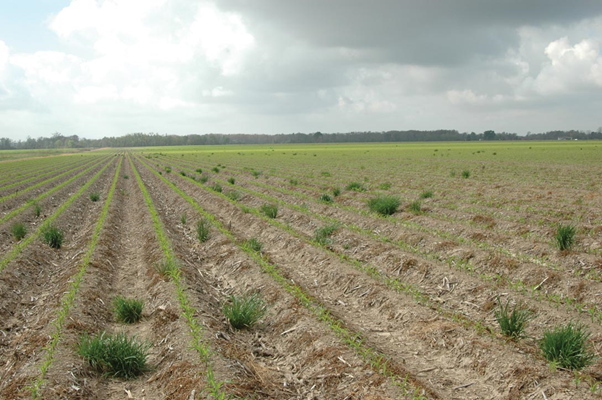 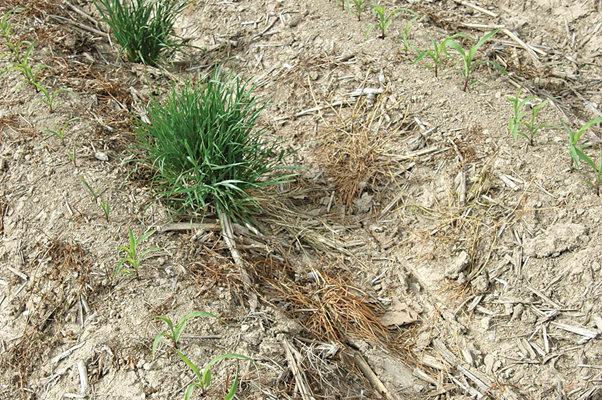 Figures 1 and 2. In 2008 and 2009, suspected glyphosate-resistant ryegrass samples were collected from a field in Franklin Parish. (Photos by Bill Williams)

Ryegrass, a popular cool-season forage, may be desirable in some pastures, but it is a serious weed in wheat and row crops. It can even be a problem weed in pastures if the focus is on maximizing summer hay production. Like henbit, ryegrass has been a growing problem for several years in many row crop fields. Unlike henbit, however, ryegrass is a statewide problem, and effective control measures are needed.

Resistance to the herbicide glyphosate is a strong suspect for the increased problems in controlling ryegrass before planting row crops. As with henbit, glyphosate has never resulted in 100 percent ryegrass control, so resistance is difficult to prove.

In 2008 and 2009, suspected glyphosate- resistant ryegrass samples were collected from a field in Franklin Parish (Figures 1 and 2). At the same time, ryegrass samples known to be susceptible to glyphosate were collected from a field at the Northeast Research Station in St. Joseph. Glyphosate at zero to 12 pounds per acre was applied to both populations when ryegrass was 6 to 8 inches tall with two to four tillers – shoots from the base of the plant. The amount of glyphosate required to reduce growth by 50 percent and dose responses were analyzed, and a seven-fold increase in glyphosate tolerance was observed in the Franklin Parish field compared with the Tensas Parish field. This is a strong indication of resistance. Every field in the state has not been tested for glyphosate resistance, but glyphosate resistance is likely in fields where this herbicide has failed to control ryegrass.

Several fall and spring programs have been evaluated for managing ryegrass before planting row crops. In fields where glyphosate resistance has not become a problem, producers may want to consider using the herbicide Resolve in their weed-eradication program. Resolve at 1.25 ounces per acre has been the only herbicide evaluated that improves ryegrass control when co-applied with glyphosate compared with glyphosate alone.

When the herbicide applications are made in December or early January, growers can expect 10 to 20 percent better control when Resolve is added to glyphosate. Unfortunately, there is not an inexpensive program for managing glyphosate-resistant ryegrass, so it is imperative to stop the spread of resistant ryegrass.

Clethodim is very susceptible to weed resistance, so producers are cautioned to use at least 14 ounces per acre. Reduced rates will quickly lead to clethodim-resistant ryegrass. The herbicides Assure, Fusilade and Poast have not been as effective as clethodim, but additional rates and timings need to be considered. After ryegrass develops seed heads, the herbicides paraquat plus diuron on cotton, metribuzin on soybean or atrazine on corn or grain sorghum are effective.