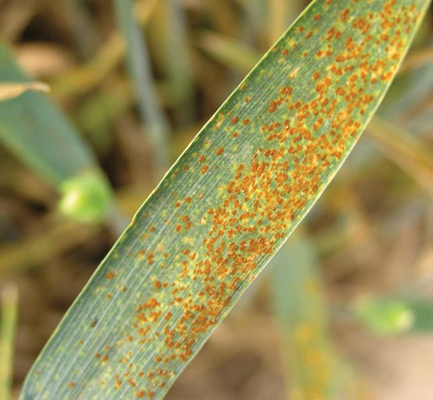 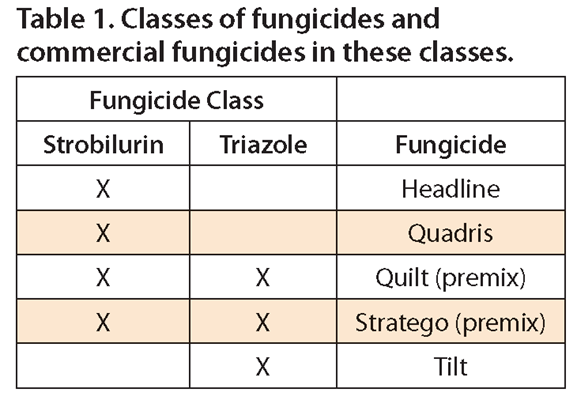 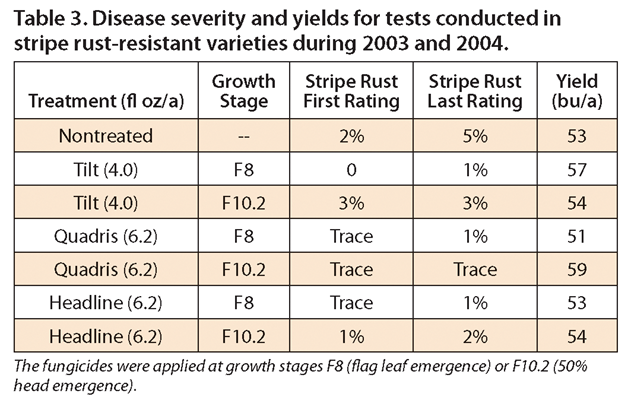 If not properly managed, diseases can reduce grain yield and quality, adversely affecting the profitability of wheat production in Louisiana. The major diseases of Louisiana wheat are leaf rust and stripe rust. Until recently, stripe rust was the major wheat disease in Louisiana, but leaf rust has re-emerged as the predominant threat. Symptoms of these diseases and conditions that favor their development are listed in Figure 1. Other diseases that occur less frequently or are not as widespread are bacterial streak, stem rust, leaf and glume blotch, barley yellow dwarf and head scab.

Effective disease management is crucial to a productive wheat cropping system, the foundation of which is high-yielding, disease-resistant varieties. Each year, LSU AgCenter scientists evaluate genetic resistance to plant pathogens in variety tests planted on research stations across the state. Varieties are monitored for agronomic characteristics and genetic resistance to pathogens. The results from these tests provide producers with a source of unbiased information for variety performance and serve as the basis for variety recommendations. Go to Variety Trials & Recommendations.

When resistant varieties are not available or new races of plant pathogens emerge and threaten the crop, fungicides may be needed to combat disease epidemics. Therefore, LSU AgCenter scientists evaluate experimental and commercial fungicides for efficacy against these pathogens.

Field experiments targeting genetic resistance and fungicides were conducted on the Ben Hur Research Station, Baton Rouge; the Macon Ridge Research Station, Winnsboro; the Northeast Research Station, St. Joseph; and the Dean Lee Research Station, Alexandria, from 2003 to 2009. Selected fungicide treatments were applied to wheat varieties expressing varying degrees of genetic resistance to leaf and stripe rust (Table 1). Fungicides were applied at flag-leaf emergence, which is when the last leaf emerges just below the head or at 50 percent head emergence. Disease severity on the flag leaf and the flag-minus-one leaf (the leaf just below the flag leaf) was recorded in field plots several times during each growing season. Stripe rust was the predominant disease in 2004 and 2005, while leaf rust predominated from 2006 to 2009. In addition, grain yields and test weights were calculated for individual plots for treatment comparisons.

In studies conducted during 2004 and 2005, disease severity was less and yields were higher in stripe rust-susceptible wheat varieties treated with fungicides compared with nontreated wheat (Table 2). Stripe rust severity ranged from 50 percent to 16 percent in the initial ratings and 88 percent to 50 percent in the last ratings. Initial severity was lowest in wheat treated early at the flagleaf emergence stage; however, by late season, severity was similar among most fungicide treatments. Yields in treated wheat were 20 percent to 30 percent more than the nontreated wheat. There were minimal differences in yield among fungicide treatments based on application timing.

The residual activity of fungicides varied among products; however, most products provided at least four weeks of protection against both rust pathogens. It is important to note that residual activity can be eroded by harsh environmental conditions such as excessive rainfall or other conditions favorable for disease development. Generally, the most effective products are premixes of a strobilurin (azoxystrobin and trifloxystrobin) plus propiconazole. Propiconazole – the active ingredient in the fungicide Tilt – applied alone also provided satisfactory residual activity.

Leaf and stripe rusts can be managed effectively using high-yielding, diseaseresistant varieties. When these varieties are used, a fungicide usually does not provide an added benefit. When susceptible or moderately susceptible varieties are used, however, a fungicide may provide economic returns. While both rusts reached damaging levels in susceptible varieties, stripe rust caused more damage than leaf rust in these studies. This may be attributed to earlier initiation of stripe rust epidemics resulting in a longer period for disease development compared with leaf rust. Application timing was not a significant factor in most tests; however, in some tests the early timing (flag-leaf emergence) provided more protection than the later application (50 percent head emergence.). This was more pronounced when epidemics began prior to the later application.