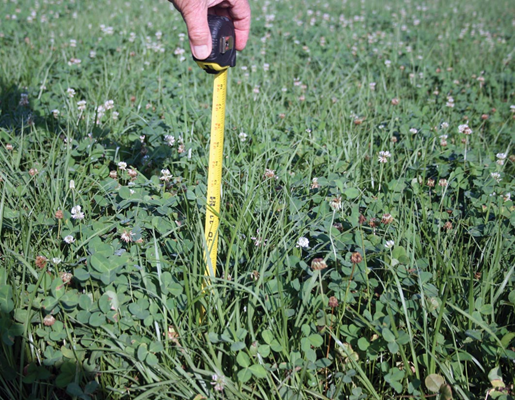 Warm-season grasses are the most valuable forage resource in Louisiana livestock production, filling the forage demand during the summer and providing hay for winter feed. However, warm-season grasses such as Bermuda grass and Bahia grass require adequate nitrogen fertilizer to provide the energy and protein needed by young, actively growing livestock.

Unlike grasses, legumes, which include clovers, can fix aerial nitrogen gas into organic nitrogen compounds available for use by plants. Legumes do not require nitrogen fertilizer for productive growth. Both annual and perennial clovers are adapted to some Louisiana soils.

The amount of nitrogen supplied from clover can vary depending on clover species and productivity. Planting clover in a pre-existing warm-season grass pasture can be of benefit by reducing nitrogen fertilizer use, producing more nutritious forage, and extending the forage production season. Research during past decades has demonstrated the value of clover in Louisiana pastures, but commercial use has been limited in much of the state. However, because of the increasing cost of nitrogen fertilizer and the availability of new clover varieties, there is renewed interest in clover and its potential value.

An LSU AgCenter research project was designed to compare total yield, nitrogen production and forage digestibility from Bermuda grass receiving zero, 100 or 200 pounds of nitrogen per acre from commercial fertilizer or overseeded with one of six clover species (arrowleaf, ball, crimson, berseem, white and red clover). Three AgCenter research stations – Hill Farm in the northwest, Macon Ridge in the northeast and Southeast – collaborated on this project for two years to quantify the benefit of clover planting in pre-existing Bermuda grass pasture. Clovers were drilled into Bermuda grass pastures in November, and forage was harvested through the growing season of the next year. Sample analysis was conducted at the LSU AgCenter Forage Quality Analysis Laboratory at the Southeast Research Station in Franklinton.

Clovers contribute differently to total pasture yield throughout the growing season. Berseem clover and crimson clover are early starters in the spring (Figure 1). These two clovers planted in Bermuda grass pasture yielded about 500 pounds more dry forage per acre than the other slower-starting clovers between mid-March and late April. Because Bermuda grass is a warm-season grass and remains somewhat dormant, the April forage yields are mostly from clover growth. Contrasted to the early-growing clovers, white clover starts much slower in the spring but increases its yield contribution through the growing season lasting until August in some situations. Although not an earlier starter, red clover is long- lasting and contributes to total forage yield of the pasture earlier than white clover.

Clover growth is affected by the soil pH, soil type and temperature.

Producers in need of early forage production may be interested in berseem or crimson clover as options. Ball clover is noted as having a high potential for self reseeding, and although not thoroughly investigated in this study, there was evidence of reseeding by ball clover. Observations of the test sites at the three Louisiana locations demonstrated some propagation in the second year from ball clover, white clover and red clover.

May is about the time the warmseason grass begins considerable growth. However, the larger proportion of total forage in the plots overseeded with clover was still mainly clovers. Compared with monoculture warm-season grass, the average digestibility of plots containing clover was 7 to 8 percentage units higher in May cuttings. The higher nitrogen fertilizer did not consistently affect digestibility of the pasture. By the end of the growing season, the digestibility of the different treatments became similar to each other with the dwindling clover not contributing much to the total forage collected.

Berseem clover produced the most nitrogen, followed by red clover. These clovers yielded more nitrogen than the fertilizer treatments. Nitrogen production from crimson clover was in between those from the 100- and 200-pound-peracre nitrogen applications.

Clover contributions differed among locations, with poorer stands of all clovers and less benefit from the clovers on the sandy northwest Louisiana site. Because clovers are site-specific, choosing the best adapted clover in an area is an important aspect of a successful cloverwarm- season grass pasture system.

Even though berseem, red and crimson clovers are promising in terms of productivity or early growth, they are not suitable for all sites. Some white clover varieties and ball clover have potential on appropriate sites for sustained stands under low input management because of their reseeding ability. Some newer white clover varieties provide potential for longer stand life and expansion of the area of white clover adaptation.

Stand failure in one year because of inadequate moisture on the droughtier northwest Louisiana site illustrates the vulnerability of clovers to adverse establishment conditions and the risk incurred with clover establishment. Careful selection of both clover species and sites along with appropriate management, especially during stand establishment, provides opportunity for both improved forage nutritive value and substantial nitrogen contribution to pasture systems to offset forage quality limitations of the widely grown warm-season grasses and the high cost of nitrogen fertilizer.