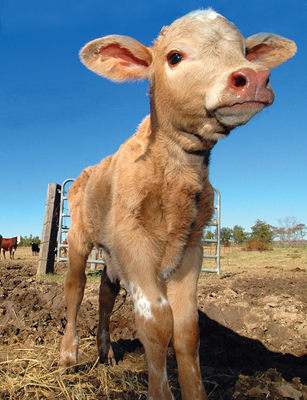 The LSU AgCenter’s Calf to Carcass Program helps beef cattle producers learn how their animals perform after they are weaned and in the marketplace. These records help improve cattle production in Louisiana and make it more profitable, said Tim Page, coordinator and animal sciences professor.

The program provides a system for getting information back to the producer about how well their beef calves fare during finishing in an Oklahoma feedlot and the meat quality at the packing plant. Since the program began in 1993, more than 800 producers have participated, Page said.

Most Louisiana cattle producers have cow-calf operations. They raise calves until they are 6-8 months old and then sell the calves to someone else. With this production system, the producer has no knowledge of how his calves perform later in life or what their meat quality is. The Calf to Carcass Program allows producers to retain ownership of their calves through the feedlot – in this case an Oklahoma feedlot – where they are grain-fed until marketed to a meat packing plant for processing.

Participants in the Calf to Carcass Program, which is about 7 percent of Louisiana’s 11,500 beef producers, take their calves to one of four preconditioning sites in the state. These include LSU AgCenter facilities at the Baton Rouge campus, Dean Lee Research Station near Alexandria, Nicholls State University and McNeese State University.

“At the preconditioning sites, we vaccinate the calves, de-worm them and place several ear tags, and we precondition them for 45 days,” Page said.

Preconditioning ensures that the calves are healthy and eating adequately from feed troughs before they are loaded up and hauled to the feedyard in Guymon, Okla.

Calves have to be dehorned and castrated before arrival at the preconditioning sites and well-healed from these two procedures. Each producer must bring at least three calves and pay $85 per head to cover costs of transportation and feed.

The Calf to Carcass Program encourages producers to obtain a premise identification to show where calves originated. Page said some producers are wary of the system, fearing it will lead to government intrusion, but the ID system allows for better control in the event of a disease outbreak.

Producers in the Calf to Carcass Program receive reports on average daily gain and feed efficiency in the feedyard, then quality grade, yield grade, ribeye area, backfat and marbling at the packing plant.

Page said buyers will pay more for calves from producers who have been through the program.

A cattle owner not satisfied with what his or her calves bring at sale can go to another more successful producer to find out what makes the difference.

“It’s helped to create a network for producers,” Page said.

Producers enrolled in the program go on a tour to Oklahoma to get a firsthand look at how their animals stack up against cattle from across the country. They also get to see different operations tied to the cattle industry. Tours have included visits to large ranches, meat packing plants, beef research centers and feedyards.

In March 2010, the tour included a visit to one of the oldest ranches in Texas, the Waggoner Ranch, which at about 550,000 acres is the largest ranch in Texas under one fence. The tour also included visits to the Tyson Fresh Foods beef processing center near Amarillo, Texas, and the Noble Foundation, an Oklahoma-based research facility.

Cattle producer Tom Ardoin of Pine Prairie said he has benefitted from the program.

“What I like so much is seeing the  growth our calves make and getting the feedback of the carcass data,” Ardoin said.

Before, he said, selling calves “was just a shot in the dark. This is proof-positive that what we were doing did work.”

Data he received confirmed that he is using a good bull on his 125 crossbred heifers. “We can advertise that these calves gain this weight and finish at that weight.”

Ardoin said Calf to Carcass encourages producers to work with neighbors to put together truckloads of cattle, sharing the transportation costs to Oklahoma feedlots.

“I had never done that before I got involved in the Calf to Carcass Program,” he said. “It’s given me a market option I never thought about.”

John Patrick of St. Francisville, who has 100 cows, divided between registered Angus and registered Herefords, said the program was an eye-opener for him.

He also said he partners with other producers to share the costs of shipping cattle to Oklahoma, coordinating a shipment of similar-sized calves.

He said the carcass data from his calves and other producers in the program are invaluable. He learned the importance of vaccination before selling calves. Sick calves at a feedlot require expensive veterinary care and aren’t able to gain weight while they are being treated.

Patrick said the program is aimed at enabling small-scale producers to have the same options available to larger operators. “It helps us understand our options.”

Tommy Shields, LSU AgCenter county agent in Calcasieu Parish, said the Calf to Carcass Program helps producers learn the ropes of bringing cattle directly to the feedlots. “They get their feet wet, and then they do their own deals,” he said.

Shields said even owners of large herds have benefitted from participating in the Calf to Carcass Program.

He said Brahman cattle face an uphill challenge from skeptical buyers outside of Louisiana. But bringing Brahman cattle to Oklahoma has proven that the breed can compete, he said. “It’s changed perceptions of some of the buyers up there.”

The Calf to Carcass Program has helped Louisiana producers develop the confidence to use what they have learned to increase their profits, Page said.

“But the program is about more than just making a profit from the calves. It’s about sustaining and increasing profitability in the future. A producer learns what the buyers want. The buyers are demanding higher yields and quality grading cattle,” Page said.