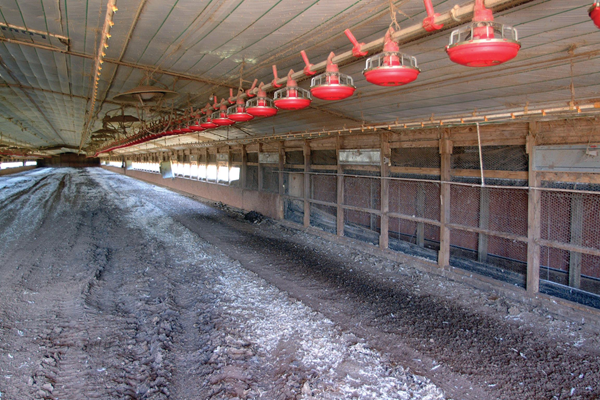 Broiler houses are home to thousands of birds every year, and the litter has to be removed periodically. (Photo by John Wozniak) 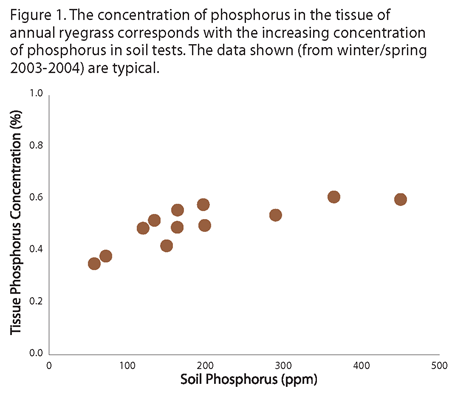 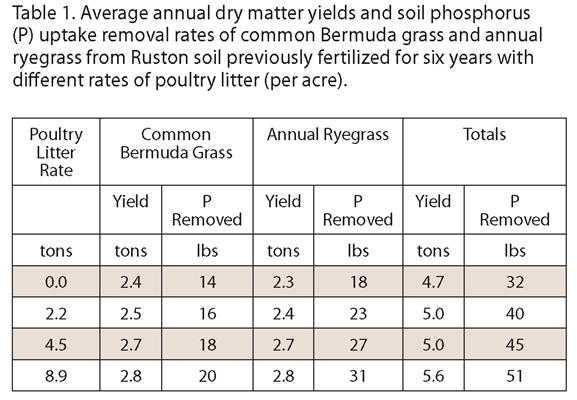 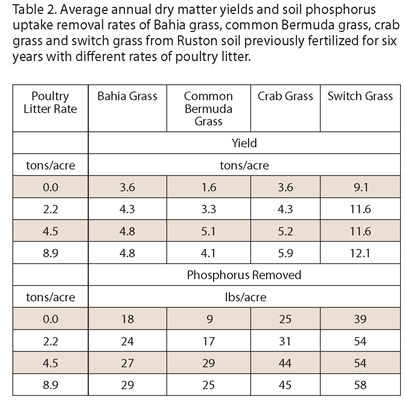 Controlling phosphorus loss from pastures fertilized with poultry litter is a nutrient management problem poultry farmers face. Some of the phosphorus lost from litter or soil enriched with phosphorus by years of poultry litter fertilizer winds up in surface water where it nourishes algae and aquatic plants and may increase their density. A shift in fish populations also may occur. From the standpoint of water-quality standards, this scenario constitutes impairment.

While there is no evidence surface-water eutrophication – or nutrient enrichment – like this is linked to the use of poultry litter fertilizer in Louisiana, research has demonstrated the usefulness of several management practices for reducing the loss of phosphorus from litter and soils amended with it. For example, the concentration of phosphorus in litter may be reduced by altering the poultry diet, thus reducing the buildup of phosphorus in soil as well as the direct loss of phosphorus from litter. In addition, various chemical amendments that contain aluminum, calcium or iron can be added to litter or soil to reduce the solubility of phosphorus and reduce its movement into surface water.

The movement of phosphorus from the soil into surface water also can be reduced by removing phosphorus from soil. This is done by growing and harvesting a crop without further phosphorus fertilization. For Louisiana pastures overly enriched with phosphorus, the crop would likely be Bahia grass, Bermuda grass or perhaps annual ryegrass. However, if a market for biofuel feedstocks such as miscanthus or switch grass develops, these grasses might be used to remediate high-phosphorus soil.

In LSU AgCenter research, plots approximately 33 feet by 10 feet on Ruston fine sandy loam soil were planted with common Bermuda grass at the Calhoun Research Station, and triplicate plots were fertilized with poultry litter at rates of zero, 2.2, 4.5 and 8.9 tons of dry matter per acre annually for six years. At the highest rate, this led to a soil phosphorus concentration of more than 400 parts per million in the surface 6 inches by 2001, and no litter was applied after 2001. Bermuda grass hay was cut an average of three to four times annually from 1997 to 2001, and dry matter yield and tissue concentration of phosphorus were determined.

From fall 2001 to 2004, annual ryegrass was seeded into the common Bermuda grass, and annual ryegrass and common Bermuda grass were harvested three to five times annually through summer 2005. Dry matter and tissue phosphorus were determined for each harvest. Small sub-plots of Bahia grass, common Bermuda grass, crab grass and switch grass were established within the main plots in 2002 and harvested three to five times annually for yield and tissue phosphorus concentration through 2005. From 2002 to 2005, plots were fertilized with 180 pounds of nitrogen per acre annually, and potash was applied as needed based on soil test results.

During the years litter was applied, average annual phosphorus uptake and removal ranged from 29 pounds per acre for control plots to 56 pounds per acre for the highest litter rate, with phosphorus removal tending to increase with increasing years of litter application (or soil phosphorus concentration). However, removal of phosphorus was less than the amount applied, ranging from an average of 56 percent applied at the 2.2-tons-per-acre rate to only 18 percent at the 8.9-tons-per-acre rate. Thus, phosphorus buildup occurred despite hay harvest, particularly at the highest fertilization rate.

Phosphorus uptake and removal with annual ryegrass and common Bermuda grass from 2002 to 2005 without phosphorus fertilization represent a potential reduction in soil phosphorus for this common north Louisiana soil. Table 1 shows little residual effect of poultry litter on average annual yields. On the other hand, phosphorus uptake and removal tended to increase with the increasing rate of previous fertilization, particularly for annual ryegrass, which showed an increase in tissue concentration of phosphorus with increasing concentration of soil phosphorus. Significantly more phosphorus was removed from the high-phosphorus plots than from the control plots by annual ryegrass in all years and by Bermuda grass in two of the four years.