Claudia Husseneder analyzes the DNA of termites to determine which colonies they belong to. This aids in the evaluation of the effectiveness of the treatment programs. (Photo by Linda Foster Benedict) 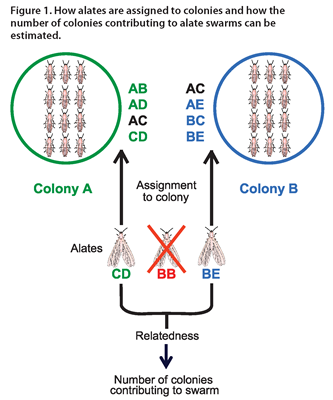 Because of the persistent infestation of the Formosan subterranean termite that has threatened to destroy historical buildings in the French Quarter of New Orleans, a federally funded program called Operation Full Stop was initiated in 1998 to apply areawide treatments to suppress the termite and limit further damage.

The success of Operation Full Stop is assessed in two ways. First, the foraging activity of colonies is measured using nontreated, in-ground monitoring stations in the French Quarter throughout the year. Second, swarming activity of alates – winged, reproductive termites – is measured using traps under street lamps during the swarming season in late spring and early summer.

The number of infested monitoring stations and the number of alates caught in traps do not necessarily reflect the number of active termite colonies because a colony’s foraging area can extend over hundreds of yards. A single mature colony can produce thousands of alates. Infestations of foraging workers and swarms of alates need to be assigned to their colony of origin. This is not an easy task for two reasons. First, subterranean termites forage and nest mainly underground. Therefore, direct observation of termite activity is almost impossible. Second, even if foraging workers or swarming alates are captured, they cannot be physically distinguished to identify from which colony they come.

To solve this problem, researchers in the LSU AgCenter Department of Entomology analyze DNA profiles of termites. DNA profiling identifies genotypes – or hereditary factors – visible as a specific banding pattern – or fingerprint – of each individual and each colony. These DNA fingerprints can be used like barcodes to tag each colony with its genetic profile.

Because colony offspring share a subset of bands of their mother colony’s barcode, foraging workers can be assigned to colonies, and the actual numbers of termite colonies infesting an area can be determined. Swarming alates can be assigned to their colony of origin following the same principle. Because colonies are families and genotypes are inherited from the king and the queen that originally started the colony, relatedness among alates can be calculated and used to estimate how many colonies contribute to a particular swarm. For example, if a swarm is made up of only one colony, all individuals are highly related. The more colonies mix in swarms, the lower the average relatedness becomes (Figure 1).

Areawide treatment was expected to kill the majority of termite colonies in the French Quarter and lead to a decline and eventual disappearance of their swarming and foraging activities. By using mark-and-release recapture and DNA profiling to "tag" colonies before treatment, researchers have shown that proper treatment successfully eliminates termite colonies. In a study along the Riverfront Railroad in New Orleans, all colonies – regardless of their size and the number of kings and queens in them – treated with baits containing insect growth regulators disappeared and did not come back after treatment. This indicates that many hundreds of colonies were eliminated during the 12-year course of treatment by Operation Full Stop. As a result of reducing the number of colonies, alate numbers decreased during the first years of the program. Since then, however, alate numbers have reached a steady level, and despite continued treatment efforts, no further reduction was observed. At the same time, a small percentage of in-ground monitoring stations have remained infested, and some residual infestations remain in trees and structures. This leads to the question: Do colonies foraging in these monitoring stations, trees and structures serve as a major source for persisting alate swarms in the vicinity?

AgCenter research has shown that the in-ground monitoring stations within the program area contribute less than five percent of alates caught in the traps. The research team is investigating how many alates are originating from nearby infestations in trees and structures. Preliminary data suggest that only a small percentage of alates can be assigned to infestations close to each trap. This can be explained by two scenarios: 1) many hidden colonies are missed by treatment and monitoring efforts and contribute to the alate swarms; and 2) a few remaining colonies still produce a considerable number of alates. Therefore, alate counts have not been reduced as much as expected.

To find out which of the alternatives would explain the residual alate swarms and the difficulties of finding their colonies of origin, AgCenter researchers used DNA profiles to determine relatedness of alates in swarms and calculate how many colonies contributed alates to each swarm. The number of colonies contributing to swarms caught in traps has dropped from an average of 13 in 2003 to seven in 2007 and only two per trap in 2008. This proves the number of colonies has been significantly reduced because of the persistent treatment effort. Because alates don’t always fly to the closest trap, however, the originating colonies cannot be pinpointed easily.

These studies show the effectiveness of the treatment provided by Operation Full Stop on termite infestations of the French Quarter. The results are encouraging for combating Formosan termites and other invasive and native termite species. To sustain the treatment success and avoid repopulation by alates from outside the treatment area, areawide treatment not only should continue but also should be expanded, even though federal funds are likely to subside. It is in the vital interest of Louisiana to carry on the "second battle for New Orleans" against the Formosan subterranean termite.

Acknowledgement
The U.S. Department of Agriculture’s Agriculture Research Service and the City of New Orleans Mosquito and Termite Control Board are cooperating partners with the LSU AgCenter in Operation Full Stop.

(This article was published in the fall 2010 issue of Louisiana Agriculture Magazine.)