Nutria - More Than a Nuisance 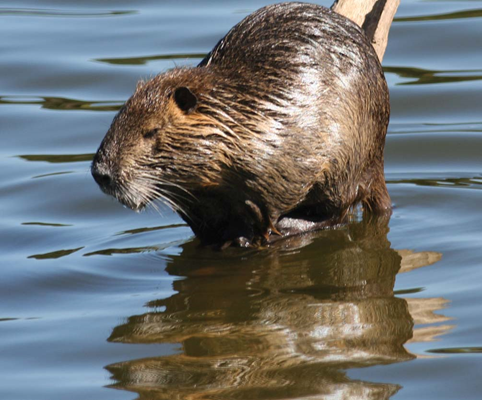 A semi-aquatic rodent, the nutria live as far west as Texas, east to the Florida panhandle and southward toward Tampa Bay, Fla.

Nutria have large orange incisor teeth, which are perfect for gnawing plant materials of any density and strength. They eat mostly vegetation, but they will eat small mollusks, insects and nestling birds. (Photos by Frank Rohwer)

The nutria is possibly the most well-known of the non-native species introduced into the environment of south Louisiana. Over the past 90 years, they have spread as far west as the hill country of Texas, east to the Florida panhandle and southward into the Tampa Bay, Fla., region. A semi-aquatic rodent, the nutria’s original range includes most of South America.

Nutria adults range in size from 12 to 18 pounds with some individuals reported as large as 37 pounds. The nutria’s fur is yellowish brown to dark brown, except on the belly, which is a pale yellow. The head is proportionally large with large orange incisor teeth perfect for gnawing plant materials of any density and strength. The rodent’s tail is long, round, scaly and thinly haired except at the base. The digits of the hind legs are partially webbed, while those of the front feet are not. Although nutria eat mostly vegetation, they also consume small mollusks, insects and even nestling birds if they encounter them while foraging.

Early in its history in Louisiana, the nutria was considered not only a source of pelts for the fur trade but also an effective method of aquatic plant control in canals and bayous. It has been debated whether the introduction of the nutria from South America into Louisiana was accidental or intentional. Most believe, however, that nutria were released intentionally in the early 1930s for their fur and their potential to clear waterways of unwanted, clogging plants. A small number of nutria farms became part of the coastal economy during these times. Unfortunately, the nutria preferred the native wetland vegetation over invasive non-native vegetation. As the nutria numbers increased, so did the damage they inflicted on the native plant life and natural environment.

Trapping the nutria for their fur was initially the control method. But as demand for fur worldwide has decreased, nutria numbers have increased as has their damage to the wetlands and marshes of Louisiana.

Nutria can eat on average about 3 to 4 pounds of plants per day. They can reproduce any month of the year and generally produce two to three litters of young per year with each litter consisting of three to five offspring. The animals live for about 12 years. The only predators the rodents have are alligators and people.

Louisiana is trying to control the numbers of nutria to minimize the continued degradation of the marsh. In 2002, the state implemented an incentive payment or "bounty" to be paid to hunters properly licensed to kill nutria for their pelts and meat. Louisiana continues an aggressive campaign to encourage the consumption of nutria meat. Nutria can be prepared for consumption in many different ways and can be quite good and nutritious. State efforts to encourage the widespread use of nutria meat, however, have been met with limited results, and scientists continue to seek innovative ways to protect the fragile wetlands from this troublesome creature.