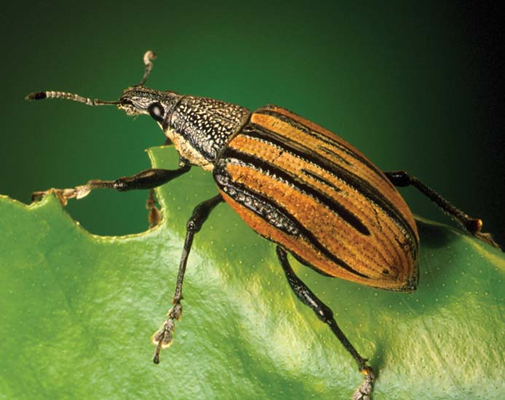 The diaprepes root weevil was first found in Louisiana in 2004. This is an adult on a citrus leaf. ( Photo by Keith Weller, Bugwood.org)

The Plaquemines Parish government conducts spraying of citrus orchards throughout the parish to control the Asian citrus psyllid and help prevent the citrus greening disease.(Photo by Craig Roussel) 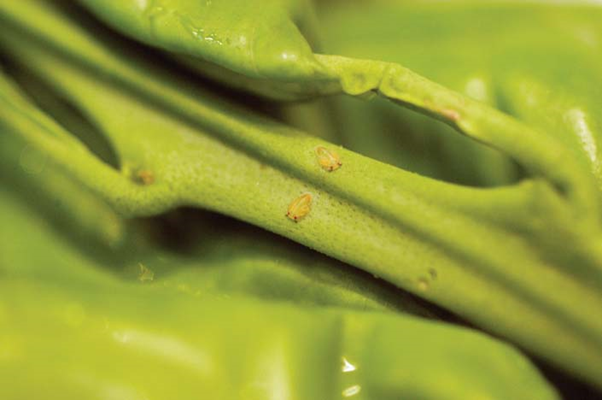 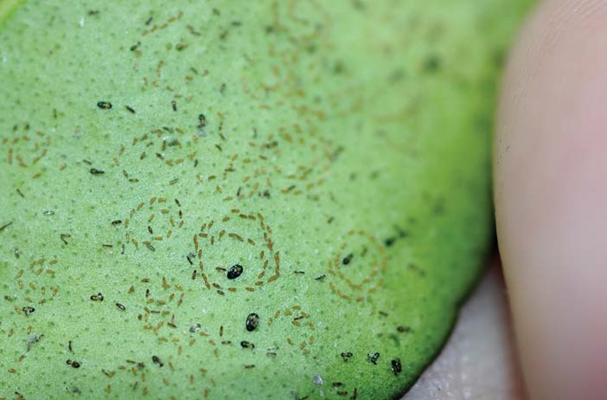 The citrus blackfly deposits its eggs in a spiral-shaped pattern, making it easy to identify. 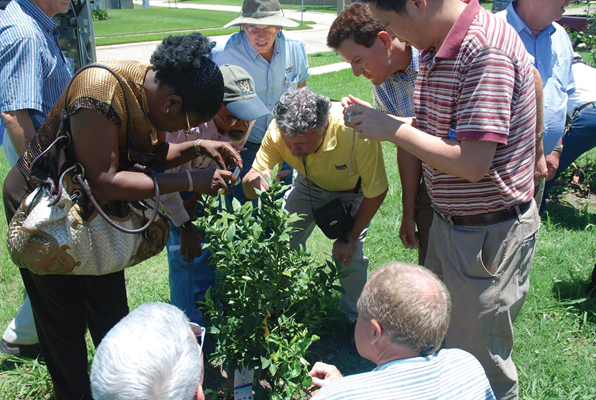 Don Ferrin, center in the yellow shirt, helps train people in Plaquemines Parish on how to detect the Asian citrus psyllid and greening disease. (Photo by Johnny Morgan)

The Louisiana citrus industry includes 250 growers who produce on average $9 million worth of fruit on 800 acres per year. The majority of the commercial citrus acreage, 550 acres, is in Plaquemines Parish, the narrow strip of land just south of New Orleans next to the Mississippi River. The Louisiana citrus industry comprises mostly small orchards whose owners maintain full-time jobs and produce fruit as extra income.

Satsumas and navel oranges make up the majority of Louisiana citrus along with a limited amount of grapefruit, kumquats, sweet oranges, mandarins and tangerines. All fruit is picked tree-ripe and sold at farm stands, in gift boxes, at farmers markets, by roadside peddlers and in supermarkets.

The production of citrus nursery trees also is in Plaquemines Parish, where 20 nurseries produce $1 million worth of budded citrus tree stock annually. The trees are sold to chain stores, nursery and garden centers, hardware stores, fruit stands and commercial orchards.

Freezes and hurricanes periodically destroy Louisiana citrus orchards, so growers typically have to reestablish an orchard every 10 years on average. In addition to weather-related threats, the Louisiana citrus industry has been affected by a number of invasive insects and diseases, which has led to more regulation, increased production costs and decreased yields. Insect and disease introductions include citrus blackfly, West Indian sugarcane stalk borer, Asian citrus psyllid and citrus greening.

Citrus pests can be introduced into Louisiana through tropical storms and hurricanes as well as by humans. Federal and state restrictions prohibit moving ci rus plant material among citrus-producing states without proper approval.

One of the most potentially devastating pest/disease complexes that has recently been detected in Louisiana is the Asian citrus psyllid and huanglongbing – also known as citrus greening. The Asian citrus psyllid is an extremely destructive citrus pest because it spreads citrus greening, a bacterial disease for which there is no control. This disease has caused the loss of hundreds of thousands of acres of citrus production in Florida.

The presence of the Asian citrus psyllid in Louisiana was originally reported by a homeowner in Algiers, La., in late May 2008. The homeowner discovered an insect she did not recognize and found a picture of Asian citrus psyllid on the LSU AgCenter website. This identification was confirmed by the U.S. Department of Agriculture in early June, and the lime tree from which the psyllid was first collected was confirmed to be infected with the bacterium that causes citrus greening disease.

All species of citrus are susceptible to this disease, and other members of the citrus family may serve as hosts, particularly orange jessamine. Infected trees decline in vigor and eventually die. Detection in the early stages is difficult. Currently, DNA identification is the only means of detecting the pathogen.

Initially, symptoms may appear in only one tree branch, but the disease eventually will spread throughout the tree. The detection of Asian citrus psyllid/citrus greening prompted the USDA and Louisiana Department of Agriculture and Forestry to conduct a comprehensive survey of all citrus-producing regions of the state. The AgCenter published educational materials, conducted meetings with producers and homeowners, distributed information to the media, produced a video on how to scout for Asian citrus psyllid and greening, and developed recommendations for control in commercial orchards, nurseries and backyards. AgCenter specialists also worked with the Plaquemines Parish government to implement an areawide management plan that has prevented an outbreak in the parish.

Citrus also has been plagued by other invasive insect pests. The citrus blackfly was first reported in Plaquemines Parish in high populations in 2007. Possibly introduced on winds from Hurricane Katrina, citrus blackfly is relatively easy to identify because it deposits its eggs in a distinct, spiral-shaped pattern on the undersurface of the leaf. Citrus blackfly is a piercing, sucking insect, and both adult and immature nymph stages feed on vegetation.

The damage from citrus blackfly alone does not cause substantial reductions in crop yield, but the production of a sugary waste substance called honeydew makes a good medium for the growth of sooty mold. This sooty mold makes a black film on leaf surfaces and can reduce a tree’s ability to photosynthesize effectively.

Soon after detection in Louisiana, the citrus blackfly infestation increased to the point that many trees were covered with these insects, and initial efforts to manage this pest with insecticides were not successful. Recently, a parasitoid wasp has been released across the state. It attacks the larval stage of citrus blackfly and can quickly reduce a population to nondamaging levels.

Another pest that has invaded Louisiana is the West Indian sugarcane stalk borer, generally referred to as diaprepes. Native to the Caribbean islands, it is a significant pest of citrus and sugarcane production in Puerto Rico. Diaprepes are now widespread in Florida and cost millions of dollars annually to control.

Diaprepes was detected at Audubon Park in New Orleans in 2004, on food brought in for zoo animals. Diaprepes have a broad range of hosts that include citrus, sugarcane, sweet potatoes and at least 270 ornamental plants. Vigilant monitoring will be critical to maintain this insect at a manageable population in Louisiana. Any insect that looks like diaprepes should be collected and reported to an AgCenter or LDAF office.

Strains of citrus tristeza virus that cause decline of sweet orange, grapefruit and tangerine grafted onto sour orange rootstocks are prevalent in Florida and have been managed successfully by the use of resistant rootstocks. Because sour orange is not commonly used as a rootstock in Louisiana, this strain of citrus tristeza virus has not been a major concern here. Whereas decline-causing strains can be managed by changing rootstocks, stem-pitting strains cannot. Because of this, preventing the introduction of new strains and using virus-free propagation material available through certified budwood programs are the primary strategies for managing this disease. Louisiana does not have a certified budwood program, but through the newly created Citrus Clean Plant Network, the state’s citrus industry has access to certified budwood produced in other states.

A few citrus insects and diseases now being watched for in Louisiana include the brown citrus aphid, citrus canker and citrus black spot.

The example of the detection of Asian citrus psyllid and greening disease by a homeowner demonstrates that everyone has the ability to detect an invasive species and report it to the proper authorities. If this is done in a timely manner, it is possible to stop, or at least slow, the spread of an invasive species.