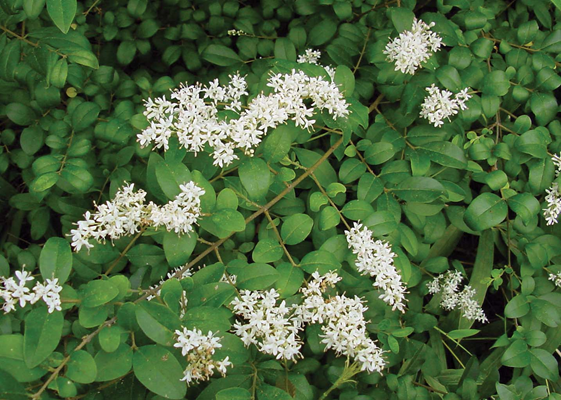 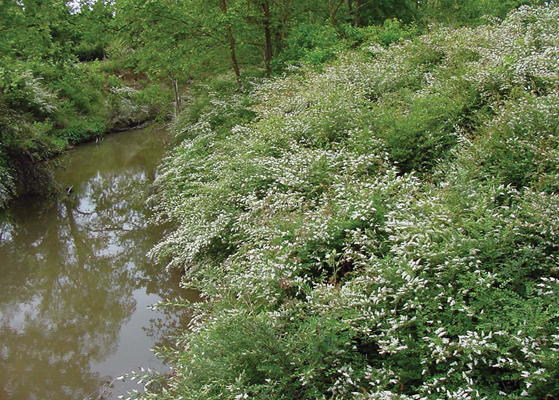 Under ideal growing conditions, such as this stream bank where water and sunlight are plentiful, Chinese privet can completely dominate all other plant growth.

Since the arrival of Europeans in North America, thousands of plants have been introduced intentionally for agricultural, fiber or ornamental purposes. Others have been introduced accidentally. And although most have not become a problem, some 300 or so have escaped their intended uses and populated natural areas. This phenomenon, commonly known as biological invasion, may threaten endangered plants, alter the food chain, change natural fire patterns or displace native species when these non-native populations expand and dominate the systems where they grow. Biological invasion is recognized as one of the greatest threats to the preservation of biodiversity and as a vehicle of accelerated global change.

In Louisiana, as elsewhere, ornamental gardening and landscaping with aggressive non-native species are part of the threat to native ecosystems – one that may be reduced by more environmentally conscientious practices, such as selecting native plants over non-native species. The heavy use of non-native plants in human-inhabited landscapes – and most ornamental plants are non-native – promotes invasion by virtue of proximity and the availability of sprouting fragments, seeds or spores that find their way into adjacent wild lands. The case of Chinese privet is a classic example of what can go wrong when certain species are introduced into the landscape.

Chinese privet was first introduced as an ornamental shrub from China in 1852. By the 1930s it had escaped cultivation, and by the 1970s it was widespread in the forests of the southeastern United States. Currently, Chinese privet is considered one of the most common invasive plants in humid southeastern forests. It also is recognized as a weed in New Zealand, Australia and Argentina. Growing in moist, well-drained soils such as stream bank areas, Chinese privet commonly develops into single-species stands and outcompetes native species.

As an ornamental shrub, Chinese privet makes a perfect landscape plant. Easy to grow and difficult to kill, Chinese privet thrives in most soil types. It does well in full sun and in shadier sites. It flowers heavily and reliably, and it fruits well. It attracts birds and other wildlife, making it desirable to homeowners. It also tolerates repeated above-ground damage such as heavy pruning and mower/trimmer damage. All of these characteristics are common across the group of privets, making them some of the most widely grown shrubs in the world.

In natural landscapes, the characteristics that make Chinese privet a popular choice for landscaping contribute to its ability to compete successfully against native species in forested lands – prolific fruiting, high germination rates and vegetative reproduction. Being shade-tolerant allows Chinese privet to proliferate both along forest edges and interiors. Attractiveness to animals, especially birds, ensures its seeds are dispersed far and wide. These attributes, especially its ability to tolerate repeated above-ground damage, including browsing by animals, and its high reproductive capacity, make the spread of Chinese privet difficult to control. In Louisiana, Chinese privet has been documented in every parish.

Mechanical removal of individual small plants in small areas can be successful as a control method, but this approach is less effective with larger plants because of the plant’s ability to re-sprout from stumps and root fragments. Where infestations cover a larger area and include larger plants, successful manage ment requires the use of herbicides, although this may be questionable because of heavy labor requirements and risk to non-target plants. In some cases, broad-scale use of heavy equipment to remove the above-ground portions of plants may be necessary. Normally, though, such aggressive treatment is last resort and must be combined with subsequent herbicide treatments.

Glyphosate herbicides are among the most commonly recommended and can be effective when used correctly. Soil disturbance should be minimized before and after herbicide treatment. Applying the herbicide to the leaves is best on actively growing plants and where non-target plants are few. This foliar application may cause rapid defoliation, slowing movement of the herbicide to roots and retarding control. Applying the herbicide to the trunk, usually in an oil-based carrier, is effective, though labor-intensive and expensive. Removing the above-ground portions of the plants through cutting, mowing, chopping or burning makes herbicide application easier, though not necessarily more effective. Traditional trial-and-error testing of herbicides with mechanical control has not yielded reliable treatments for controlling this plant in natural areas.

The LSU AgCenter has approached Chinese privet from a different perspective, using basic life history information to build population models to help identify best approaches to effective management. Knowledge of a species’ life history is useful for developing projection models that estimate population growth. These models have enhanced the study of invasive-plant demographics; they can be used for examining population growth of the same organism in response to different site conditions, as well as the response of organisms to different management techniques.