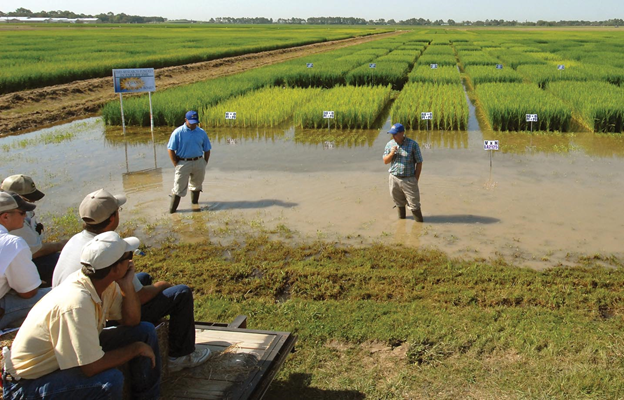 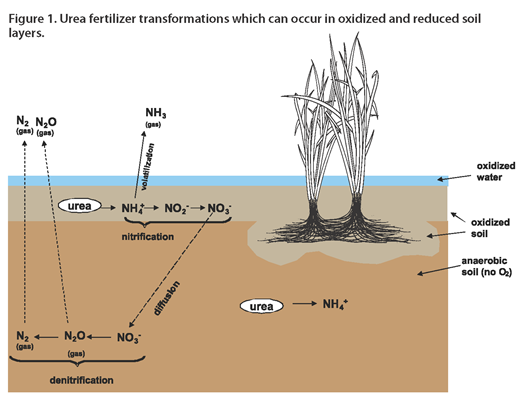 To understand how nitrogen can be lost from a rice field, one must recognize that nitrogen management in rice is much more difficult than in upland crops, such as soybeans or corn. The principal reason is that rice fields remain flooded for extended periods of time creating an anaerobic – without oxygen – soil condition. Over time after flooding, the soil will form two distinct layers, a thin oxidized (with oxygen) soil layer directly below the flood water and an anaerobic soil layer. A thin oxidized soil layer also exists around the proximity of the rice roots because some oxygen being taken in by the rice plant, via its hollow stem, is lost from the roots to the soil.

Nitrogen exists in many forms in the soil and can change from one form to another depending on the presence, or lack of, either oxygen or water, the form of nitrogen fertilizer used, and the placement of the fertilizer. Rice-available forms of nitrogen include both the nitrate ( NO3- ) and ammonium ( NH4+ ) forms.

If urea is applied and the field is not flooded for several days, there will be enough moisture from the soil and the atmosphere to begin hydrolysis of the urea fertilizer to the NH4+ form. This time, however, the NH4+ is in the oxidized soil layer, and another reaction will follow the first reaction, which will change the ammonium ( NH4+ ) to nitrite ( NO2- ) and then to nitrate ( NO3- ). This process is called nitrification and can be seen in Equation 2 and Equation 3.

Nitrate can be taken up by rice, but because it is a negatively charged ion, it is not held strongly by the clay particles and is, therefore, prone to diffusion to the deeper, anaerobic soil layer. Once NO3- reaches the anaerobic layer, it is transformed by anaerobic bacteria in a series of reactions that produces nitric oxide (NO), nitrous oxide (N2O) and dinitrogen (N2) gases. All of these gases can be lost to the atmosphere by volatilization. This series of transformations is called denitrification as illustrated in Equation 4:

What happens if a situation arises during a rice growing season that would warrant draining of a rice field? Examples of this untimely draining would include draining to help alleviate rice water weevil pressure, straighthead, zinc deficiency or some other disorder. A flood could also be lost accidently by a break in the levee. In a situation like this, the NH4+ that was stable in the anaerobic soil layer under the flood now becomes susceptible to nitrification as the soil oxidizes and is transformed to NO3- (Equations 2 and 3). Although the NO3- can still be used by the rice plant, the real problem occurs when the rice field is re-flooded. The soil environment again becomes anaerobic and denitrification (Equation 4) begins transforming NO3- to gaseous forms, which are eventually lost to the environment. This is why more urea fertilizer should be applied prior to re-flooding in rice.

The reason the soil needs to be dry when applying fertilizer can be explained in Equation 5:

In this equation the dissolved ammonium ( NH4+ ) ion and ammonia gas (NH3) are in equilibrium because the equation arrow points in both directions. When soil is moist, however, this forces the reaction to the right side of the equation because the soil is continuously drying. Thus, more ammonia gas (NH3) is produced, which can be lost to the atmosphere by volatilization and depletion of NH4+. We can also see from this equation that a high soil pH (a large concentration of OH- ions in soil solution) can also force the reaction to the right resulting in volatilization losses.

If producers are unable to flood their fields in a timely manner, they can use a special form of nitrogen fertilizer stabilized with a urease inhibitor, which can slow the hydrolysis processes before appreciable nitrogen can be lost. A urease inhibitor is just that; it is a chemical that can be coated on urea fertilizer that inhibits the urease enzyme and, thus, slows the hydrolysis of urea to the NH4+ form (Equation 1). Agrotain is a commercially available urease inhibitor that can be applied on urea at the local fertilizer dealer. Past studies at the Rice Research Station have shown that producers can gain about five days before flooding when using Agrotain-coated urea before they see a decline in rice grain yields.

All nitrogen recommendations in rice are variety-dependent and are updated and published yearly by the LSU AgCenter in Rice Varieties and Management Tips. This publication is also available at any LSU AgCenter parish extension office. All nitrogen recommendations are based on yearly variety-by-nitrogen trials conducted at the Rice Research Station and at producer sites across Louisiana. A minimum of three years of data is needed before an official nitrogen recommendation is made on a newly released variety. To facilitate this, many potential varieties actually begin to be tested before their official release. Much of this type of research is funded by the Louisiana Rice Research Board.

Producers must be vigilant with nitrogen fertilizer applications. Unfortunately, even under the best management practices, not all of the applied nitrogen fertilizers will be taken up by the rice plant; some will eventually be lost. This loss, however, can be minimized with the proper fertilizer source, placement and water management.

(This article was published in the winter 2009 issue of Louisiana Agriculture.)