A simple way of creating a good seal is to use a couple of two-by-fours and aheavy weight.

Specialized machinery is used to load and unload grain in the bags. (Photos by Roberto N. Barbosa) 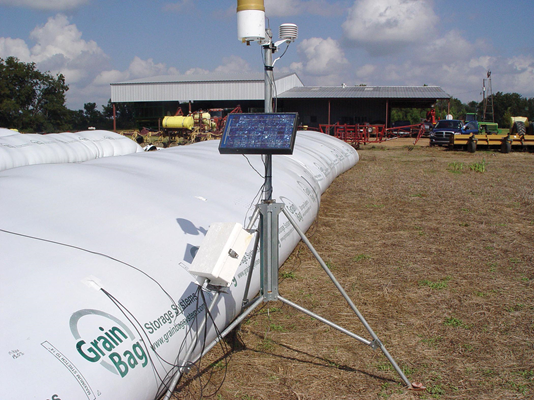 An automatic weather station collects weather information around a grainbag. 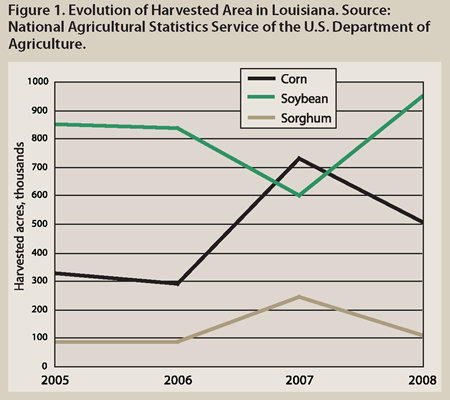 In the past four years Louisiana farmers have planted and harvested record-breaking amounts of corn, soybeans and sorghum – so much that the state’s storage capacity could not handle it all (Figure 1). Lack of storage brought farmers a series of problems, such as loaded trucks being turned away from grain-filled elevators or reports of trucks waiting eight hours to unload. Louisiana farmers need to have access to readily available grain storage, but commercial elevators are not built overnight. On-farm grain storage is a viable alternative but considered a long-term investment that many farmers are not willing to make. Short-term storage may be a solution.

Short-term grain storage has been used for quite some time in other countries including Argentina, Australia and Israel. In this type of storage, grain is loaded in plastic (polyethylene) bags commonly known as grain bags. They measure 200 feet long by 9 feet high and hold around 8,000 bushels of corn. Specialized machinery loads and unloads grain in the bags. The bags can be left in the field or in a more central location for easy management.

A few farmers were willing to experiment with such a system. Their questions concerned the effects of the high moisture on grain quality because of the significantly more humid weather in Louisiana compared with weather in other countries where the grain bags are used. LSU AgCenter research tried to shed some light in the use of grain bags for temporary grain storage. Producers in Avoyelles and Franklin parishes agreed to allow scientists to use electronic sensors to monitor grain temperature and oxygen content inside the bag. Weather conditions such as air temperature, relative humidity and rainfall were measured with an automated weather station.

The premise of the grain bag system is that once the bag is filled with grain and properly sealed, oxygen levels drop considerably in the first couple of weeks. Without oxygen, bacteria, fungi or insects that may have found their way into the bags cannot survive or cause damage to the stored grain. Damage could potentially occur in the first few days of storage while oxygen levels are still high but would cease as soon as oxygen is depleted.

The moisture level of the incoming grain is important. As a rule of thumb, the drier the grain, the better. High-moisture corn or sorghum coupled with high air temperature and high relative humidity will create spoilage points inside the bag before the oxygen is completely depleted. Results of this spoilage only would be known upon opening the bag, which, if positive, can reduce the market value of the grain.

Sealing the bag after filling and maintaining it throughout storage are critical. The starting end of the bag is self-sealed by the incoming grain. But after the bag is filled, the other end has to be sealed properly to keep out water, air, insects and animals. This is crucial for the success of the storage unit. A simple way of creating a good seal is to use a couple of two-by-fours and a heavy weight. During storage, wildlife and birds may come in contact with the bag and puncture it. This damage would create entry points for oxygen and water, rendering the seal useless. Bag manufacturers usually give producers white tape that can be used to seal punctures. Constant inspections are needed to re-seal puncture sites and ensure the integrity of the bag.

Choosing where to place the bag can prove to be challenging. Preparing a site for the bag may include eliminating vegetation and rocks that may perforate the bag and modifying the terrain to steer rainfall away.

Preliminary results indicate grain bag systems are a viable alternative for the temporary storage of grain in Louisiana. During the monitoring period, internal grain temperature was held constant inside the bag, and no wide fluctuations in grain temperature were found. Grain temperature followed air temperature and became increasingly lower as the season progressed, and the air temperature fell. Oxygen levels in the bags decreased from the usual 21 percent (atmospheric content) to less than 10 percent in less than two weeks after they were filled. Overall grain quality was maintained during storage, and no increased microbial or insect activity was found in bags that had a good seal.

Perhaps the greatest and often overlooked use of the grain bag system is its ability to increase harvesting productivity. Using a grain bag system, a farmer can quickly unload his trucks and keep the combine in the field, harvesting more acres per day. This single feature may be the difference between a successful or failed season, considering how fast harvesttime weather changes in Louisiana. Once conditioned in the bags, grain can be unloaded at the farmer’s own pace, taking advantage of higher prices. The emphasis of temporary storage solutions should be in the “temporary” part – it is a solution not designed to hold grain in the field for a long time but to help farmers increase productivity and make the most of their harvest.