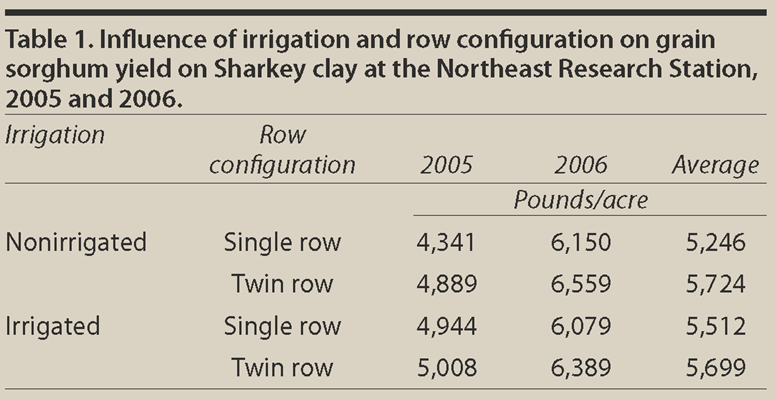 Production practices influence grain sorghum yield, and research has found a consistent sorghum yield response to row widths narrower than 40 inches, particularly on alluvial soils – those created by sediment deposited by flowing water. For rows less than 30 inches wide, crops are generally planted on flat seedbeds, which precludes the use of irrigation within the furrow. In recent years, newer planters have the capability of planting twin rows on raised beds. Commercial planters are available that can plant two rows, 8 to 10 inches apart, on top of 40-inch-wide raised beds. Practices such as seeding rate and nitrogen rate may interact with row configuration (twin rows versus the conventional single row). The objective of this research was to evaluate the influence of row configuration, seeding rate and nitrogen rate on yield performance of grain sorghum, with and without irrigation.

Field experiments were conducted in 2005 and 2006 on clay soils at the Northeast Research Station near St. Joseph. Two irrigation treatments were evaluated – a non-irrigated control and a furrow-irrigated treatment. The single rows were planted in mid-May of each year. Twin rows were 9.5 inches apart, centered on raised 40-inch-wide beds. The seeding rates of 78,500 and 104,500 seeds per acre are equivalent to six and eight seeds per foot for single rows and three and four seeds per foot for twin rows. Nitrogen rates of 90, 120 and 150 pounds of nitrogen per acre were injected into the soil. Production practices as recommended by the LSU AgCenter were followed.

In 2006, even though three furrow irrigations were applied, yield did not increase with the application of supplemental water. Unlike 2005, yield response to row configuration did not depend on irrigation. Yields were higher on the twin rows com pared with the single row for both irrigation treatments, averaging a 359-pound-per-acre increase.

Similar to the previous year, there was little yield response to seeding rate. The optimum nitrogen rate was 120 pounds per acre with irrigation and about 90 pounds per acre when sorghum was not irrigated, regardless of row configuration.

Averaged across the two-year trial, using twin rows rather than single rows increased yield 333 pounds (5.9 bushels) per acre – 5,712 pounds per acre compared with 5,379 pounds per acre. Optimum nitrogen and seeding rates were similar for both the twin-row and conventional singlerow production systems. Both trials were planted in mid- May, the back side of the recommended planting window. Relatively low yields, especially in 2005, may have been due in part to the delayed planting.