Foliar-applied Fungicides in Corn: Does It Pay? 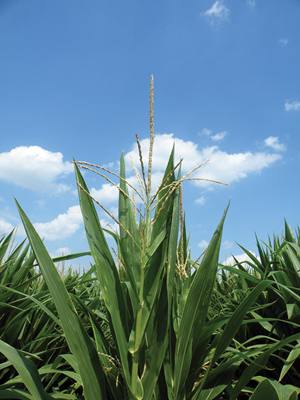 Fungicides are used to manage diseases in many field crops grown in Louisiana. Until recently, this practice has not been evaluated on corn produced in the state. In the past, foliar-applied fungicides have not been promoted in corn because diseases either do not develop or develop late in the season having minimal or no impact on yield. However, with advent of newer fungicides, some sectors of the agricultural chemical industry are promoting these applications, even in the absence of disease, to increase yields and preserve stalk density to prevent lodging – the tendency of stalks to fall over.

It was uncertain if this practice would consistently benefit Louisiana corn producers because research addressing this is limited in the state. Therefore, in collaboration with industry, LSU Ag Center scientists initiated research in the spring of 2007 to determine the feasibility of this practice. The objectives of this research are to determine if selected fungicides are effective for managing diseases affecting corn in Louisiana; if yields are higher in fungicide-treated corn than in untreated corn; and if stalk density in fungicide-treated corn is greater than in untreated corn.

In 2007 and 2008, tests were conducted at the Macon Ridge and Northeast research stations to evaluate Quilt and Headline fungicides for their effect on corn diseases, stalk density and grain yield and quality. Evaluations in 2007 included eight hybrids at the Macon Ridge Research Station and six hybrids at the Northeast Research Station. A single fungicide application was made to each variety while in the tasseling growth stage and compared with the same variety without treatment. During the growing season, plants were monitored periodically and rated for disease incidence and severity. Stalk density was assessed when corn reached physiological maturity. This was determined by collecting stalks from each plot and recording fresh and dry weights, as well as the diameters for each stalk. Densities were then calculated using this information. Yield and test weights were also recorded.

In both years, diseases either did not develop or developed late in the growing season. Therefore, the effect on disease was not evaluated.

Results from the test at the Northeast Research Station in 2008 were similar to those in 2007. Yield differences were from 11.4 bushels more per acre to 4.3 bushels fewer per acre between Headline-treated hybrids and nontreated hybrids (Table 3). When averaged across hybrids, corn treated with Headline yielded 2.3 bushels per acre more than nontreated hybrids. There were no significant differences between stalk densities and test weight among most hybrids.

The LSU AgCenter will continue to conduct research in this area to further evaluate the efficacy of fungicide applications to corn.