Complementary Contributions to Coastal Restoration in Louisiana and Mexico 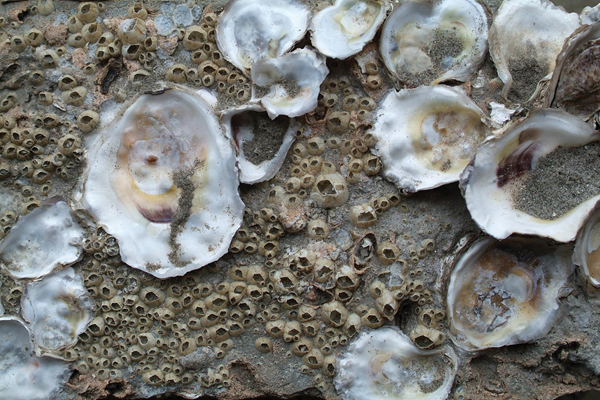 Oysters grow on an artificial reef. (Photo by John Wozniak) 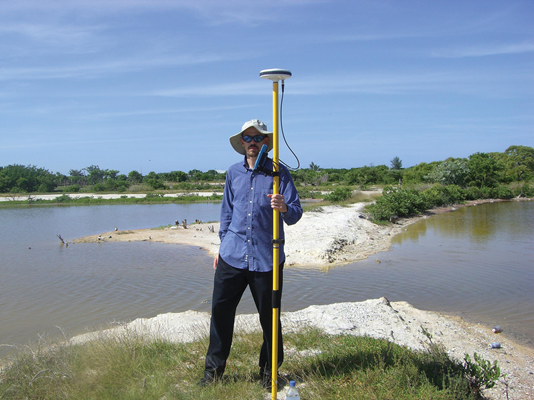 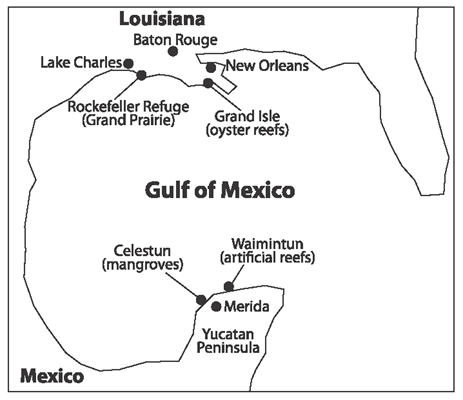 Map of the gulf of Mexico 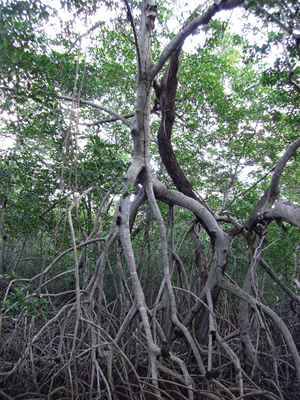 Louisiana shares attributes with other states and countries that border the Gulf of Mexico, including Mexico. Louisiana’s coastal landscape has been uniquely shaped by the Mississippi River over millennia. The deltaic landscape has played into rich fisheries, coastal activities including shipping, oil and gas, and productive agriculture and aquaculture industries. Other border areas have similar characteristics, with significant gulf coastal frontage, and, in some cases, riverine and/or low-lying land.

LSU AgCenter scientists conducted a recent study to compare and contrast coastal restoration and related issues in the state of Yucatan, Mexico with those of Louisiana. A number of issues are similar, while, due to geography, culture and other reasons, there are also contrasts. Both Yucatan and Louisiana have significant fisheries, both have longstanding local cultures, and both have low-lying lands slowly grading back to higher land in the interior. However, contrasts include different cultural history, as well as significantly different coastal geography. Whereas Louisiana is largely deltaic, influenced by the massive Mississippi River, the Yucatan has essentially no surface water because the permeable topography drains water quickly. However, both locations have coastal challenges, as well as potential for productive growth in these rich zones.

Two sets of comparisons will be explored in this article: 1) artificial reefs for habitat restoration; and 2) hydrodynamic techniques for coastal restoration. The biology associated with these projects has similarities. For example, aquatic species common to the Gulf of Mexico and coastal plants such as black mangroves can be found in Louisiana and Mexico, while other species differ significantly due to climatic and environmental conditions.

Artificial reefs can contribute to coastal restoration in both contexts. For example, sets of artificial reefs were emplaced and monitoried in coastal Louisiana (Grand Isle and Rockefeller Refuge) and on the north coast of the Yucatan peninsula (near Waimintun). Significant growth of eastern oysters, barnacles and tubeworms were observed on artificial reefs in the Louisiana environment, whereas in the Yucatan, growth included sponges and limited coral growth.

In Louisiana, research has shown that a number of positive effects can result as these bioengineered artificial reefs grow. In coastal waters, they tend to reduce wave energy, enhancing sedimentation and allowing habitat growth. They also sequester carbon because oyster shells are approximately 12 pecent carbon by mass. As the reefs grow and sink slowly into the sediments, carbon can be sequestered on long-time scales. Additionally, these structures provide a growing and sustainable protection for the Louisiana coast.

In Mexico, the artificial reefs grow native species and also provide habitat for a variety of fish species. During reef assessment there, dozens of species of finfish and other species, including sharks and rays, were observed. Coral reefs off the Mexican coast provide both habitat and protection for coastal habitats and settlements. Coral can also sequester carbon. However, biological solutions have the challenge that changes in environmental conditions (e.g. temperature or pH for coral; salinity or solids for oysters) can inhibit or stop growth, rendering these less robust under certain conditions.

In general, however, there are two reasons that “growing solutions” such as artificial reefs and coral reefs are preferred. First, they are biologically and environmentally friendly, and second, they require far less energy (often fossil fuel) both initially and over the long term. Recent work has shown that as they grow, these reefs continue to reduce coastal erosion indefinitely, as opposed to traditional stone structures that slowly sink in the soft sediment off the Louisiana coast, requiring additional work every few years to continue to provide coastal protection. In this case, it may be that techniques developed in Louisiana could be useful in Mexico or elsewhere.

The second set of projects focus on coastal hydrodynamics. In Mexico, poorly planned development, often related to tourism, has in some cases resulted in degraded ecosystems. Changes in hydrology may result in loss of coastal plants and wetlands. One location on the west coast of the Yucatan peninsula near Celestun lost an area of several dozen acres of mangroves because of such development.

Now that ecotourism has become popular, there is a desire to restore this area of mangroves. This is not only positive aesthetically, but mangroves, which are salt-tolerant, assist in coastal protec protection by their thick rooting systems. The challenge is that they require some water movement and appropriate salinities to thrive, and, in the Celestun location, road building and other development have impeded natural hydrology.

A series of experiments with plantings has done little to alleviate the visible loss of mangroves, but a somewhat larger (2 meters wide by 1 meter deep) canal brought water to a section of the dead area, and leakage from the canal (connected to the main lagoon) provided needed water flow for spontaneous regeneration of approximately four acres of mangroves.

Additional studies using high accuracy GPS assisted in designing improved hydrodynamics over a larger area, and new changes should enhance growth further. Thus, the Mexican expertise in the four species of mangroves grown there should assist in enhancing coastal protection and ecotourism.

Meanwhile, in Louisiana, our one species of mangrove, Avicennia germinans, provides some promise for coastal protection, particularly on our barrier islands. It does freeze back every few years, but the root systems appear to assist in reducing land loss and maintaining the protection of the barrier islands.

Studies on linking artificial reefs and mangroves for coastal restoration continue, and interest in such activities both within the LSU AgCenter and Louisiana in general, are growing. Ongoing activities are focused on linking Mexican institutions with the LSU AgCenter to enhance coastal restoration and aquaculture that is beneficial to both. Specifically, studies on mangrove regrowth because of improved hydrodynamics were done in Mexico that could enhance the growth of native mangroves in Louisiana, and insights about artificial reefs could help restore coastal areas in Louisiana and elsewhere.