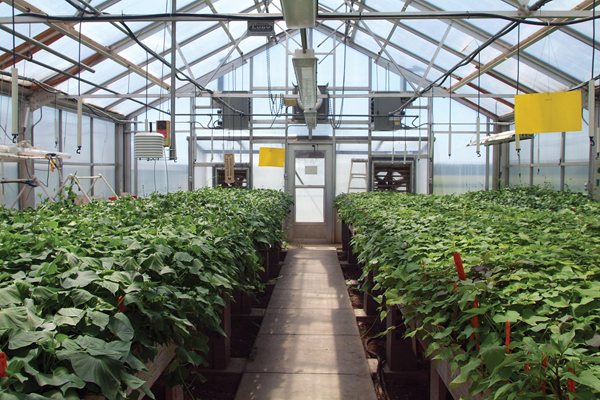 The Sweet Potato Research Station in Chase, La., provides virus-tested foundation seed for the industry. The seed gets its start in the greenhouses at the station.(Photo by John wozniak) 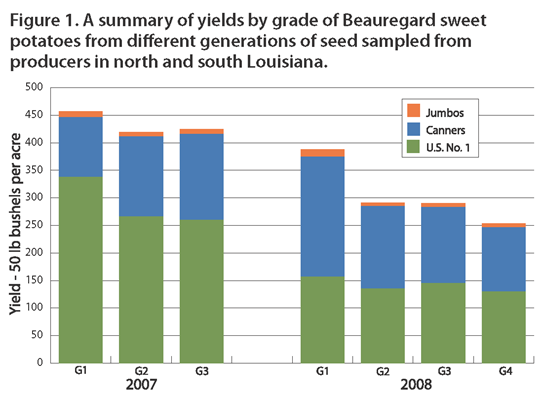 A sweet potato crop is vegetatively propagated, which means it is grown by bedding storage roots and subsequently transplanting vine cuttings into production fields from the resulting sprouts. Mutations and pathogens accumulate over time in vegetatively propagated crops, like the sweet potato, which can lead to performance decline and yield reductions. Viruses alone can reduce yields by 25 percent to 40 percent in he Beauregard variety. One means of reducing decline is to provide pathogen-free propagating material. Tissue culture technologies for producing healthy plants have been available for several decades and have been used to produce virus-tested sweet potato plants for research purposes. In 1999, the LSU AgCenter carried this one step further by using healthy plants from tissue culture to produce virus-tested foundation seed, which is sold to sweet potato producers.

The Sweet Potato Research Station produces 10,000-15,000 bushels of virus- tested foundation seed each year, which is made available to producers. However, to produce enough plants for a commercial crop, producers must increase the seed on their farms for at least one year. It is not clear how this affects the qual ity of their seed because older crops on their farms can serve as a source of virus to re-infect seed. A survey was conducted during 2007 and 2008 to evaluate the performance of different generations of sweet potato seed collected on farms across Louisiana.

Virus-tested foundation seed (G1 = generation 1) was grown for one year at the Sweet Potato Research Station. Five growers each from north and south Louisiana provided a 40-pound box of their newest seed (G2 = seed one year removed from foundation seed) and their oldest seed (generally G3 or G4). Each seed sample was bedded separately at the LSU AgCenter Burden Center in Baton Rouge. Beds were covered with a woven row cover to prevent spread of viruses from one seed source to another by insect vectors. Plants from these beds were used to establish a replicated field plot to compare the yields of the different seed sources.

In 2007, a subset of plants from each seed source was tested to determine incidence of virus infection. Of the 19 seed sources indexed, 18 had 100 percent virus infection, while only 20 percent of G1 plants were infected. Thus, it is clear that re-infection with viruses occurs rapidly on commercial farms where sweet potatoes from previous crops provide a constant source of virus. Approximately 80 percent of the plants were infected with sweetpotato feathery mottle virus, an aphid-transmitted virus that by itself does not significantly affect yields. In addition, five other viruses were detected at low levels (2-10 percent).

In both years, total yields and yields of U.S. No.1 sweet potatoes were greater for the G1 foundation seed than for G2 or G3 seed, which had similar yields. In 2008, G4 yields were slightly less than yields for G2 or G3. Unfortunately, we were not able to evaluate older generations (G4 +) of seed in the current study, which may have been representative of yields expected in the absence of the virus-tested seed program.

Researchers will continue to evaluate the performance of various seed sources as they compare to virus-tested G1 seed. The current study suggests that, despite the fact that reinfection of seed is occurring rapidly, producers are still deriving benefits from implementing virus-tested technology into their on-farm seed programs.