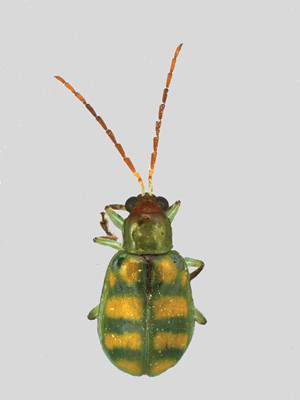 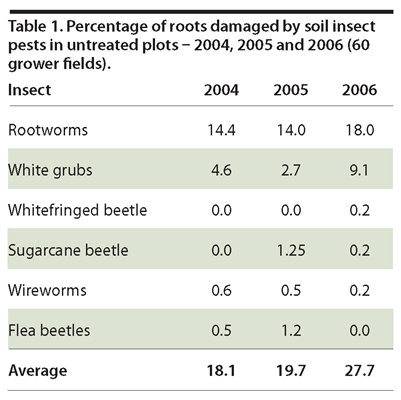 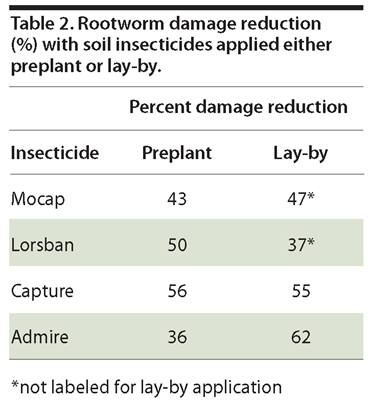 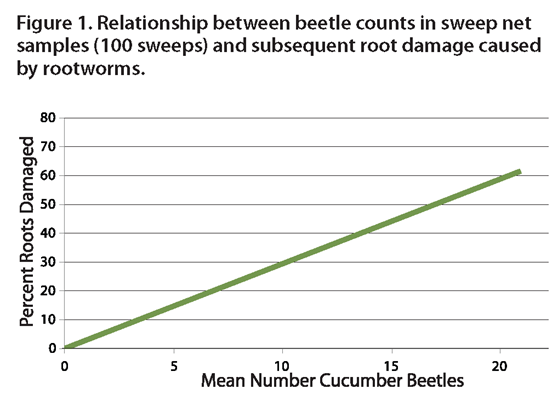 Several insects feed on the foliage and roots of sweet potatoes throughout the growing season. The sweet potato root can be injured by several soil insects, including sweetpotato weevils, rootworms, sugarcane beetles, wireworms, whitefringed beetles, white grubs and flea beetles. Research conducted from 2002-2007 in conjunction with a multistate U.S. Department of Agriculture Risk Assessment and Mitigation Program project identified the banded cucumber beetle as the most prevalent and problematic insect affecting sweet potatoes in Louisiana. In a three-year survey of untreated plots in grower fields, rootworms (cucumber beetle larvae) damaged 15 percent of the roots (Table 1). This damage was greater than that of all other soil insect pests, including white grubs, whitefringed beetles, sugarcane beetles, wireworms and flea beetles.

Adult banded cucumber beetles feed on the foliage of sweet potatoes, but this feeding causes no apparent injury to the plants. Adults deposit eggs on the soil at the base of plants, and the larvae (rootworms) feed underground on the roots. Eggs in the soil hatch in approximately two weeks. The larval stage may last eight to 30 days depending on the food supply and temperature. Pupae – the stage between larva and adult – are found just below the soil surface, with adults emerging in about a week. Found in multiple, overlapping generations per year in Louisiana, banded cucumber beetles feed on a wide variety of crops, including soybeans, corn and various vegetables. Rootworms do not reduce sweet potato yield, but their feeding produces shallow holes and cavities on the root surface. The blemishes reduce the value of the crop by preventing the roots from being marketed as a U.S. No. 1 grade.

Season-long management of cucumber beetles is necessary because these insects are present throughout the entire growing season. Producers are advised to use a multi-faceted approach to manage cucumber beetle damage:

A limited number of soil insecticides available for use in sweet potatoes include chlorpyrifos (Lorsban), ethoprop (Mocap), bifenthrin (Capture and several generics) and imidacloprid (Admire). Chlorpyrifos and ethoprop are labeled only for preplant applications, while the other insecticides can be used for preplant and lay-by applications. When preplant insecticide applications are made, it is paramount they are made in accordance with label directions and as close to transplanting as possible. The soil insecticides protect the sweet potato roots from insect damage for four to six weeks. However, current sweet potato varieties require 100 to 120 days to reach marketable size.

These insecticides are evaluated along with experimental compounds each season to examine their efficacy in controlling soil insects, including cucumber beetles (Table 2). Percent damage reduction presented in the table reflects the level of control attributed to the specific treatment without any additional control measures applied throughout the growing season.

To protect roots from mid-to-late-season damage, growers monitor their fields for the presence of adult beetles. Several studies conducted in recent years examined the relationship between beetle counts in sweep nets and subsequent root damage caused by rootworms (Figure 1). A significant positive correlation exists between beetle counts in sweep nets and rootworm damage levels at harvest. Based on these studies, the AgCenter recommends growers apply a foliar insecticide when beetle numbers exceed two beetles per 100 sweeps. If beetle numbers are kept below the two-beetles-per-100-sweeps level, rootworm damage should be held below the 5 percent damage level.

Growers are advised to sample fields every week because the beetles are highly mobile and may enter fields in large numbers throughout the growing season. The foliar-applied insecticides are used to kill the beetles and thereby prevent them from depositing eggs in the fields. Several foliar insecticides are labeled for use on sweet potatoes. Most products have a residual control of three to five days. Studies in grower fields suggest the scouting program can reduce rootworm damage by 50 percent or more, while at the same time eliminating unnecessary spray applications.

Soil insect pests are difficult to control because of their subterranean habits. Growers combine preplant and lay-by applications with a scouting program to monitor adult beetle populations and apply foliar insecticides when the treatment threshold is exceeded. This strategy is effective in managing banded cucumber beetles and keeping root injury below 5 percent. Researchers will continue to evaluate new insecticides as they become available for use in sweet potatoes to ensure producers have the most effective tools available to manage problematic insect pests, such as the banded cucumber beetle.