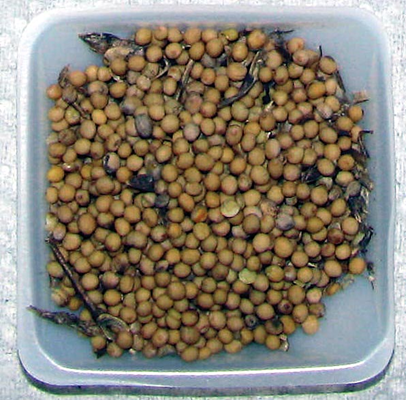 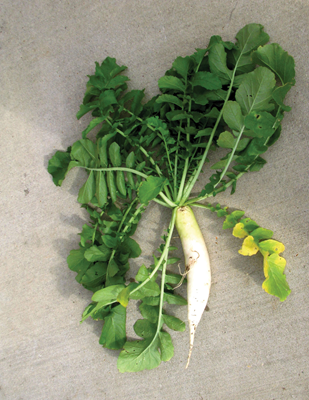 Biodiesel, a biofuel derived from vegetable and animal fats, burns more cleanly than conventional diesel in modern diesel engines. It also provides superior lubricity and reduces our dependence on fossil fuels. Because biodiesel is derived from vegetable and animal fats, it does not contribute to increased carbon dioxide in the atmosphere normally associated with fossil fuels – the carbon released by burning biodiesel is assimilated into the next year’s crop.

Soybean oil has been the feedstock of choice for biodiesel production in the United States. As a consequence, soybean oil prices have correlated with the price of crude oil since the rapid expansion of the U.S. biodiesel industry over the past several years. Soybeans contain about 20 percent oil by weight. The high-protein meal that remains after oil extraction is used largely for animal feeds. Until recently, this meal was considered the most valuable component of soybeans. The rapid increase in production of soy biodiesel has created a shortage of oil and a dramatic increase in its value. In July 1999, the price of soy oil was $1.21 per gallon – less than the price of a gallon of diesel fuel. At its peak in July 2008, soy oil sold for $4.60 per gallon. While prices have declined since, they remain more than twice those of 2006. High soybean oil prices have caused some U.S. biodiesel refineries to halt operations or to seek alternative feedstocks.

The diversion of soybeans and other staple foods to biofuel production has been blamed for increasing food costs and global food shortages. Substituting nonfood cultivated crops such as rapeseed for biodiesel is not an entirely satisfactory alternative because these alternative crops also are claimed to contribute to a reduced food supply and high food prices by competing with food crops for land and water resources.

Some also claim biofuel production leads to increased environmental pollution. It is true that when prices of soybeans and other crops are high, marginal land is brought into production. In some instances, drainage and cultivation of these marginal lands can increase soil erosion and surface water pollution. Weighing the positive and negative effects of biofuels, many experts conclude that some types of biofuels have a place in a diverse portfolio of renewable energy sources designed to reduce our dependence on fossil fuels.

The case for pursuing biodiesel is perhaps stronger than that for gasoline substitutes. Wind, solar and most other renewable alternatives produce electricity, not liquid fuel used for transportation. While replacing gasoline-powered internal combustion engines with electric motors is an attractive alternative for personal vehicles, pumps and other stationary engines, electric power is a less viable alternative for tractors, construction equipment, commercial transportation and other mobile applications requiring high torque and horsepower. Diesel engines have few alternative fuels other than compressed fossil fuel gases – for example, liquefied natural gas – and biodiesel, a renewable fuel.

The critical need for low-cost oilseeds suitable for biodiesel production has stimulated research for a new generation of oilseed crops, many of which will not tolerate freezing conditions. Frost occurs across most of the United States, though the mild winters of the South allow the use of more hardy "winter" crops, some of which are capable of producing oilseed. It is generally recognized that winter cover crops can be grown successfully to improve soil fertility and mitigate soil erosion and pollutant runoff associated with cultivated agricultural fields. Although economically and environmentally sound, the use of winter covers is not widely practiced, in part because the benefits are generally not perceived as sufficient to offset risks. As a result, many millions of acres of prime agricultural land sit idle during winter months.

In 2008, the LSU AgCenter initiated a study to identify cool-season cover crops with potential as second crops. These initial studies of planting date included three plants of the mustard family – oilseed radish, a white mustard variety (Ida Gold) and an Indian mustard variety (Pacific Gold). While many species merit evaluation within this family, these three were selected because they have successful histories as cover crops, and seed is readily available. Each of these crops is known to be tolerant of light frost, provide dense cover to suppress weeds, and use residual soil nutrients remaining after harvest of the principal crop.

Oilseed radish is considered a winter forage crop because it is low in glucosinolates – organic compounds that contain sulfur and nitrogen. Ida Gold and Pacific Gold, on the other hand, contain high levels of glucosinolates and are thus not palatable to most foraging animals. Glucosinolates have an additional benefit. They decompose in soil to form biologically active compounds that behave as fumigants to repress nematodes and other crop pests.

In LSU AgCenter studies, oilseed radish germinated early and produced consistent, dense stands that seemed to be unaffected by drought, cold or insects. Unlike the mustard crops, oilseed radish produced tall, branched stems that lodged – or fell over – several weeks before maturity. Uneven maturity; large, thick pods with small seeds; and a tangled, lodged stand suggest that harvesting with a combine will be difficult and inefficient. Improved varieties are needed before this robust plant can be grown successfully as a winter oilseed crop.

Both Ida Gold and Pacific Gold produced upright plants suitable for machine harvesting, though the seed of Pacific Gold was distributed throughout the plant, whereas Ida Gold seeds were concentrated near the top where they can be harvested more easily. Stands of the two mustards were highly inconsistent, ranging from none to excellent – a result of a combination of unusually dry soil conditions and cold temperatures in the fall of 2008. Pacific Gold failed to germinate until irrigation was applied. Late plantings of this variety in December and January grew poorly until temperatures warmed in spring. Most stands of Ida Gold showed more severe damage from chewing insects that those of Pacific Gold, though Pacific Gold matured earlier.

When planted between mid-October and late November, Pacific Gold matured between the first and third weeks of April. Ida Gold matured about two to three weeks later. Early maturity is a critical attribute for second crops to ensure timely harvest and adequate time to prepare fields for the summer crop. Both mustards were infected by powdery mildew before maturity, but these infections were mild and did not appear to influence yield. Oilseed radish began to mature in late April, and some late-planted plots had not fully matured by mid-June.

The maximum oil yield was about 143 gallons per acre with Pacific Gold. The lowest oil yields came from Ida Gold because of lower seed yields and oil content. Seed oil composition was similar to that of rapeseed, another member of the mustard family widely used for biodiesel in Europe.

When planted as early as practical in the fall, some of the tested winter oilseed crops matured by early April, allowing sufficient time to prepare fields for most summer crops. Potential oil yields are greater than those of soybeans, largely because the seeds contain a higher percentage of oil. Unlike soybeans, however, the meal of mustards is not likely to be of significant market value as animal feeds. The meal’s principal value may be as an organic fertilizer or for ethanol production.

A principal advantage of these crops is they use prime agricultural land during a period when this land is not used to produce conventional food crops. Millions of acres of land in the Southeast are winter-fallowed – sufficient to have a significant effect on the supply of feedstock for biodiesel production.

Additional research is needed to identify the ideal varieties and production practices and to firmly establish the economic benefits of growing winter cover crops for oilseed. The potential of oilseed radish as a winter biomass crop also merits further study.

(This article was published in the fall 2009 issue of Louisiana Agriculture.)