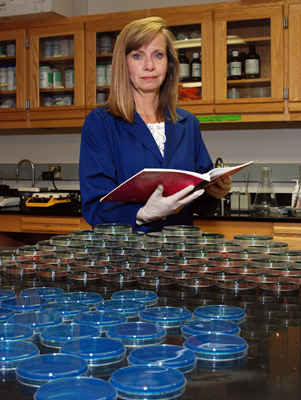 Food safety is a growing concern in the United States, and the LSU AgCenter has a major commitment to helping the Louisiana food industry control bacteria that cause food poisoning. Currently, there are major projects in the alligator, oyster, shrimp and cattle industries.

Alligator
The alligator meat industry in Louisiana is becoming aware of potential market expansion and new markets. To take advantage of this potential for increased market penetration and industry viability, the final product quality of alligator meat needs improvement and control. So the industry has turned to researchers in the Department of Food Science to evaluate the effects of various post-harvest treatment applications of farmed, whole alligator carcasses for spoilage and pathogenic bacteria.

The bacterium of concern for alligator meat is Salmonella. Reptiles naturally harbor Salmonella, and cases have been reported of people becoming sick after handling contaminated reptiles. Salmonella food poisoning can cause many symptoms, including nausea, vomiting, abdominal cramps, mild diarrhea, fever and headache.

Oysters
Vibrio vulnificus, a bacterium that contaminates shellfish and causes food poisoning, is a concern to the Louisiana oyster industry. V. vulnificus infections can cause gastroenteritis, which is characterized by fever, diarrhea, nausea and cramps; however, the bacterium also can cause primary septicemia, septic shock and often death in people with underlying medical conditions such as alcoholism, cancer or liver disease.

V. vulnificus continues to concern the Gulf Coast oyster industry because it thrives in the marine environment. Warmer waters occurring during the summer and early autumn months typically host high levels of these bacteria, which are concentrated by oysters during filter feeding. Because the organism grows at room temperature, the National Shellfish Sanitation Program requires oysters to be placed under cold storage within two hours after a dealer receives the harvest. Dealers also are responsible for maintaining oyster meat at refrigerator temperatures during points of transfer – unloading at a dock or restaurant, for example. Despite these regulations, it has been documented that a vast majority of bacterial growth still occurs during the harvesting phase of the farm-to-fork continuum, in which naturally occurring V. vulnificus can increase when oysters are kept on the deck of a boat.

To help the oyster industry better understand at what point the bacteria increase, Sea Grant College Program and LSU AgCenter Department of Food Science researchers monitored the changes in the levels of V. vulnificus and temperatures of oys ters in on-board, ice-treated oysters during wholesale and retail handling for two weeks after harvesting. Oysters were labeled as on-board wholesale or on-board retail samples, and measuring devices were taped on the outer shell of selected oysters to record temperature changes during shipment. To mimic dockside icing, oysters sat on the boat deck at ambient temperature until they were placed on ice approximately one hour before docking. Another set of oysters received no post-harvest icing and were labeled as non-iced. V. vulnificus levels were determined at harvest and one week and two weeks after harvest.

In most instances, V. vulnificus levels by treatment or time showed no differences. The only exception occurred in August samples, when the levels of V. vulnificus in dockside-iced and non-iced oysters were significantly higher than on-board retail and on-board wholesale samples. Iced oysters had higher gaping (oyster were dying) than non-iced oysters after one week in cold storage. Overall, post-harvest icing did not substantially reduce V. vulnificus in oysters; however, icing did prevent continued growth of this bacterium in the oysters.

Shrimp
Wild-harvest shrimp is one of the most important seafood industries in Louisiana. A majority of harvested shrimp are mechanically peeled and frozen. Because of this process, shrimp can become contaminated with bacteria that can cause food poisoning. LSU AgCenter researchers have worked with the shrimp industry to control bacteria on the surface of processed shrimp by using ozonated water. Ozone is approved as a food-contact sanitizing agent by both the U.S. Food and Drug Administration (FDA) and U.S. Department of Agriculture (USDA). Soaking peeled shrimp in ozonated water was found to be more effective than spraying them. A concentration of three parts per million of ozonated water for 40 to 60 seconds reduced the highest level of bacteria on the surface of shrimp.

Cattle
Louisiana has a strong cattle industry with small farms of 100 cattle or less. Recent recalls and outbreaks of beef contaminated with E. coli O157:H7 have heightened awareness for control of these bacteria on the farm level. It is estimated that 73,000 illnesses occur each year due to Escherichia coli O157:H7 infection in the United States, leading to 2,000 hospitalizations and 60 deaths. Healthy cattle are considered to be the major reservoir for E. coli O157:H7. Preventive measures need to be developed to control this bacterium on small and large cow/calf cattle farms, which in turn will make the food supply safer. E. coli O157:H7 has been found in the environment of the cattle farms and isolated in cattle water troughs. E. coli O157:H7 contamination of cattle water troughs may occur from multiple sources, such as dust, feed, birds and wild animals.

The Food Science Department offers the food industry short courses to help them maintain the quality and safety of their food products. These courses include the Better Process Control School, an FDA-approved course for companies that process low-acid foods. Attending these short courses allows the food industries to comply with USDA and FDA regulations related to food-poisoning bacteria. The Meat & Poultry Hazard Analysis and Critical Control Point (HACCP) and Seafood HACCP courses provide companies with information on new regulations as well as developing and maintaining control of food-poisoning bacteria in their products.

The Department of Food Science Food Microbiology/Food Safety Lab also offers the food industry microbiological testing of food products for spoilage and food poisoning bacteria. It also can provide the food industry with validation testing for control of food-poisoning bacteria through using chemical sanitizing agents in or on the surfaces of food products.

(This article was published in the fall 2008 issue of Louisiana Agriculture.)