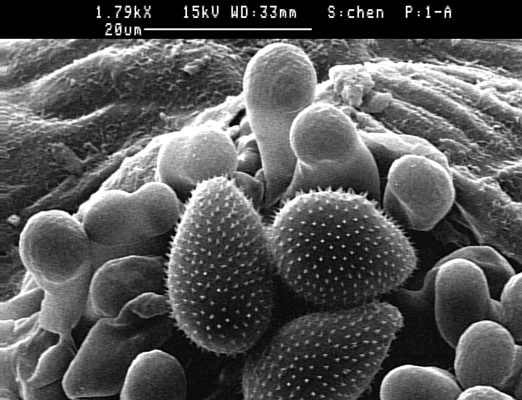 Scanning Electron Microscopy (SEM) image of a uredium (pustule) and urediospores of Phakopsora pachyrhizi, which is the cause of Asian soybean rust. (Photo by Zhi-Yuan Chen)

David Lanclos, second from left, is among this group checking for signs of Asian soybean rust. Lanclos is the state extension soybean specialist. (Photo by Mark Claesgens)

Asian soybean rust (ASR) was first detected in Louisiana at the LSU AgCenter’s Ben Hur Research Farm near Baton Rouge by Raymond Schneider, professor in the Department of Plant Pathology & Crop Physiology, on Nov. 6, 2004. This discovery was not only the first sighting of ASR in Louisiana but also the first report in North America. Confirmed on Nov. 10, ASR became the chief concern of the U.S. soybean industry.

Before the discovery of ASR in the United States, the yield losses associated with this disease in many parts of the world were devastating. In Africa, yield and quality losses ranged from 10 percent to 100 percent. In South America, especially in Brazil, losses ranged from 10 percent to 80 percent. U.S. farmers feared their losses could match these because of similar environmental conditions in the United States.

Because of the introduction of ASR into the United States, funding was made available to the soybean-producing states for a network of ASR sentinel plots that would serve as an early-warning system for the presence of the disease. The LSU AgCenter’s commitment to the system was to plant and monitor weekly 15 soybean sentinel plots strategically located in the state to detect the earliest occurrence of the disease introduced by shortand long-range spore showers. Sentinel plots are planted two to three weeks earlier than plantings in commercial fields.

Planning for the detection of ASR through the sentinel plot system triggered many questions about the fungal pathogen, Phakopsora pachyrhizi, which causes the disease. Asian soybean rust epidemiology had not been studied in the Louisiana environment. Epidemiological studies include the source of the initial inoculum, the possibility of over-wintering on kudzu and other plant species, the quantity and viability of spores arriving from out of state, the impact of UV light on spores transported over long distances in the upper atmosphere, and, once established, the spread of the fungus and development of the disease on a local and regional basis. Yield loss studies were initiated. In addition, cultural, genetic and chemical disease management measures were developed to help manage the disease.

2005 Season
Sentinel plots were established for the first time in March 2005. Fifteen soybean plots were grown from Caddo Parish in the north to Plaquemines Parish in the south. The plots were planted in the major soybean growing parishes and in areas such as Plaquemines Parish to make sure there was a host for inoculum blown across the Gulf of Mexico. Although ASR was not found in sentinel plots during the 2005 growing season, it was discovered in October at the Ben Hur Farm and in a kudzu patch within the city of Amite in Tangipahoa Parish. The kudzu find was the first ASR found on that plant in Louisiana. No other ASR findings were reported during the year.

The winter of 2004-2005 produced freezing temperatures southward to the Gulf Coast. This may have killed any major hosts of P. pachyrhizi, thus reducing the chance of pathogen survival in Louisiana. Without local over-wintering, inoculum would have to be introduced from outside sources to re-establish the disease in the state. The major source of spores during the 2005 season was believed to be the southeastern United States. Inoculum survived in southern Florida on kudzu and spread to the northern Florida counties during the late spring and early summer of that year. Continual spread was noted in southern counties of Georgia and Alabama, in particular, with two sightings in southern Mississippi counties. Usually, only tropical storms bring winds from the southeast to Louisiana. Therefore, there was only a minimal likelihood of the southeast United States being a major source of inoculum for Louisiana.

In addition to the hypothesized need to re-establish the disease in Louisiana by long-distance spore showers, an extended summer drought prevented the development of the disease until late in the crop’s development. The delay in disease development was attributed to lack of rain, low relative humidity and high summer temperatures during the growing season.

2006 Season
The end of the 2005 soybean growing season saw the establishment of ASR in extreme southern Texas and in three states in northern Mexico. Having inoculum sources in these areas changed the dynamic of ASR for Louisiana. Historically, prevailing winds come from a southwesterly direction into Louisiana. The establishment of an inoculum source in that direction increased the likelihood of occurrence of ASR in Louisiana in 2006. Conducive winter temperatures also increased the likelihood.

In 2006, ASR was first detected on June 30 on kudzu in Lafayette Parish. The find so early in the season coupled with a mild winter led scientists to speculate P. pachyrhizi may have overwintered in the state. Later finds were on soybeans in Rapides Parish in late July. Since that time ASR was reported in 26 parishes. Incidence and severity levels have varied from trace amounts to defoliation of lower to mid-plant leaves.

Research
LSU AgCenter scientists have initiated research directed toward answering questions about pathogen dissemination, disease establishment, epidemic progress and disease management. Numerous fungicide tests have been conducted on LSU AgCenter research stations and in producer fields. In 2005 and 2006, AgCenter scientists conducted 51 trials. Tests were designed to evaluate efficacy on ASR as well as other late-season diseases common to Louisiana.

In 2005, ASR developed after the conclusion of the season, and limited rust data were collected. Valuable information was gained regarding efficacy of these fungicides against Cercospora leaf blight and frogeye leaf spot, however. In addition, collaborative projects were initiated with scientists in Florida to accelerate the research process.

In 2006, ASR was present in a limited number of tests. Rust epidemics occurred at the Central, Dean Lee and Northeast research stations and in producer tests in Jefferson Davis Parish. All together, it occurred in 26 parishes. Data from these tests will be analyzed and used to develop cost-effective disease management programs. This research will be continued and expanded.