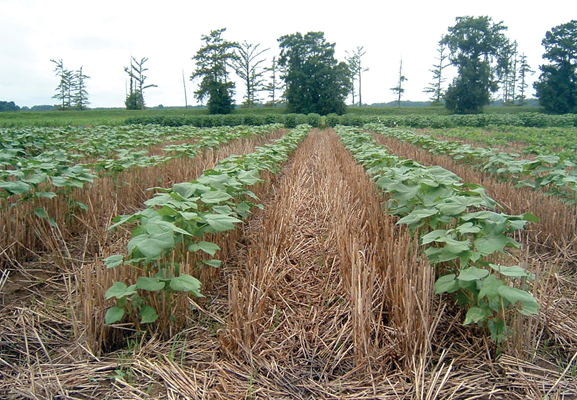 Double-crop cotton planted into residue after wheat harvest is one type of best management practices that can produce higher economic returns than non-BMP systems. Double-crop systems require irrigation of the summer crop to minimize risks. (Photo by Donald J. Boquet) 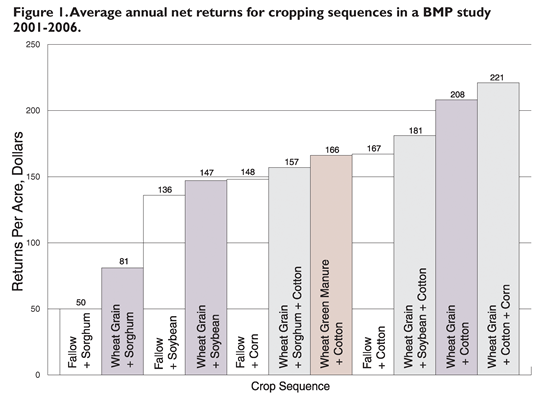 The traditional farming practice for cotton in the South for 200 years was to produce one summer crop per year following winter fallow. Because cotton residue provided scarce ground cover, this monoculture practice exposed the soil to long periods with little protection from the effects of winter and spring rainfall. Soil erosion was excessive, and agricultural sediment became the primary pollutant of surface water.

Today, many cotton farmers use conservation tillage and winter cover or grain crops to increase surface residue, which helps reduce erosion and improve water quality. Cover crops are good for water quality but are also good for soil quality. In the long term, use of cover crops is economical and beneficial. In the short term, however, this may not be the case.

The year-round system of doublecropping wheat and soybeans has been a common practice throughout the mid-South for 30 years. Acreage in doublecropping varies and relies on the perceived profitability and increased risk for the summer crop. The risk of doublecropping may be greater with cotton than with soybeans because cotton relies more on early planting and longer growing seasons to maximize yield.

A major concern for farmers has been the economics of adopting conservation systems that may increase their production costs. The LSU AgCenter has conducted research for many years on BMP cropping systems to evaluate the yield and economic benefits of these year-round diverse crop sequences. Some of these studies have evaluated irrigated systems that maintain ground cover through the use of crop residues, cover crops and no-till practices. The systems include winter cover crop/cotton, doublecrop wheat/cotton, wheat/soybeans, wheat/grain sorghum, and doublecrop wheat/cotton rotated with corn, soybeans or grain sorghum. Continuous monocropping/ winter fallow of each of the summer crops was included for comparison purposes, though these are not considered BMPs.

Total commodity yield of the doublecrop systems was higher than any of the monocrop systems because of the added wheat yield that averaged 65 bushels per acre. Summer-crop yields usually, but not always, sustained yield losses in doublecrop systems. For example, doublecrop cotton yield varied from a 3 percent increase to a 21 percent reduction, and doublecrop soybeans varied from a 12 percent increase to a 30 percent reduction. Sorghum produced the same whether planted as a monocrop or doublecrop. Yields of soybeans and corn were 10 percent to 16 percent higher in doublecrop rotation systems than in doublecrop systems without rotations, but cotton yields were the same with or without crop rotations. Compared with monocropping, doublecrop cotton yields lost an average 67 pounds of lint per acre each year, and doublecrop soybean yields dropped an average of 5 bushels per acre each year. Any yield reduction of the summer crop yields is a significant economic penalty because it represents a loss directly from the potential net returns. Although the AgCenter research showed the BMP systems to be productive, the economics of each system relied greatly on the commodity prices received in a given year. In our studies, using AgCenter-developed enterprise budgets based on the yields and inputs for each system and annual prices, some of the most profitable systems were BMP systems (Figure 1). Doublecrop cotton/ wheat produced annual net returns that ranged from $164 to $340 per acre from average yields of 65 bushels of wheat per acre and 1,043 pounds of cotton lint per acre. The system of producing three crops of corn-wheat-cotton in two years averaged annual net returns that ranged from $86 to $221 per acre.

In comparison, monocrop cotton net returns ranged from $112 to $167 per acre with average yields of 1,110 pounds of per acre. The BMP systems of doublecrop cotton rotated with corn or grain sorghum produced annual net returns that ranged from $101 to $181 per acre – approaching that of monocrop cotton but less than continuous doublecrop wheat/cotton. Continuous monocrop soybeans, corn or sorghum produced highly variable net returns that ranged from a $40 loss to a $148 gain and were usually lower than monocrop cotton or BMP systems. Negative returns occurred in some years, usually with monocrop systems and seldom with multicrop systems. Production risk was no greater with the diversity of crops in the BMP systems than with monocropping because these were irrigated studies, which prevented soil water deficiency, the primary risk factor for these types of cropping systems in Louisiana.

The BMP systems studied in the LSU AgCenter are highly productive and have potential to improve soil and water quality. Despite their value for environmental protection, farmers face limitations in fully implementing these systems because, with current inputs and variable commodity prices, not all systems will be economically competitive with monocrop cotton every year. Government conservation programs that subsidize effective BMPs with public funding are needed for practices such as winter cover crops to promote implementation and attain their valuable environmental benefits, especially in combination with no till. These studies were conducted with no till, a viable economic practice because of the associated savings in fuel, equipment and labor costs.

Acknowledgment
This research was funded in part by Cotton Incorporated, the Louisiana Cotton Support Committee and the Louisiana Soybean and Grain Research and Promotion Board.

(This article was published in the winter 2007 issue of Louisiana Agriculture.) 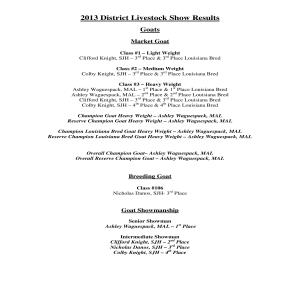